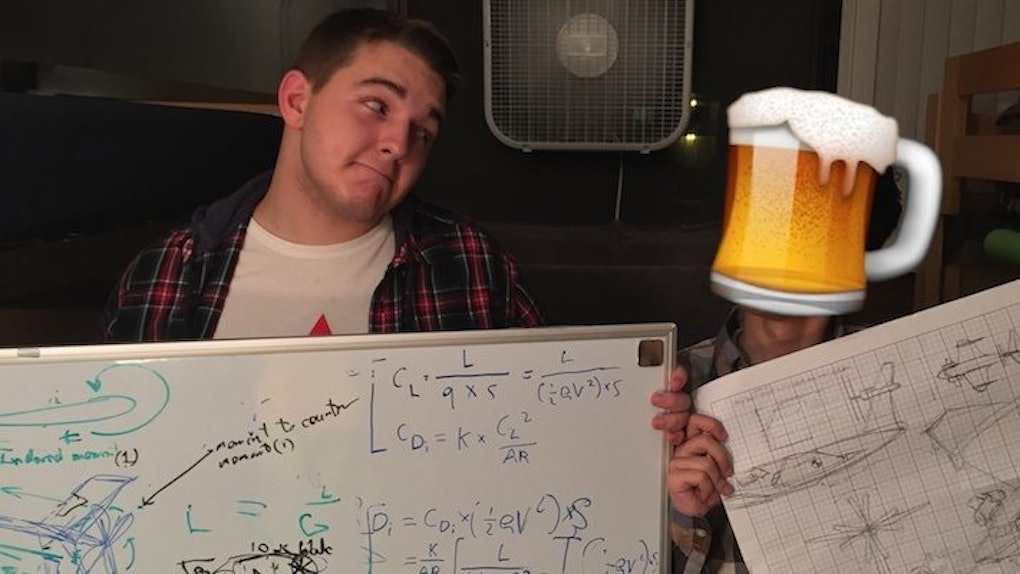 The guy who designed an entire airplane while he was drunk is way better at being not sober than you are.

Everyone deals with alcohol in different ways.

After taking a few drinks down, some people can change into more interesting versions of themselves at parties. Other people turn into wildly aggressive yet confident fight machines.

Some humans will even consistently pass out on the futon in my living room after pouring an entire box of Cheez-Its on the floor.

Then, there is Keith Fraley's roommate, “Mark,” a mechanical engineering student at Michigan Tech who spends his drunken nights designing entire airplanes.

If you're confused, don't worry about it. You should be confused because that sentence makes no sense.

Keith told The Guardian, “Mark,” who is trying to remain anonymous for some dumb reason, designed and worked out the math behind an entire aircraft one night, woke up the next morning, sketched out what the plane -- which is actually an ekranoplan -- would look like, while still completely smashed, and then fell asleep again.

He then allegedly woke up an hour later with no recollection of what happened.

Keith uploaded images of his roommate's work to Twitter two days ago in a post that since went incredibly viral.

The story behind the events that led to the project are a weird mix of “A Beautiful Mind” and “Animal House.”

It all started around 11:30 pm. Mark burst into the room in a drunken sway, asking where his textbooks were and after greeting me he rushed back out of the room. From what the person who brought him up [to the shared accommodation] was saying, Mark had a ton of rum and vodka-mixed drinks. He then came stumbling back two minutes later to grab his giant whiteboard. I just laughed as I sat on the computer listening to his murmurs. Around 1:30 am, he came back and he sat on the couch with a worn look on his face. My friend Cody and I both looked at Mark as he then began to spew information about his whiteboard designed craft and the calculations behind it. Cody and I were in tears from laughter because the aerospace mathematics he tried telling us about sounded like a slurred robot. I did no encouraging towards the creation of this, but I did encourage him to continue talking because it was hilarious.

Basically, Mark is like if Will Hunting and Stifler had a baby.

There are no major plans to produce a full working version of the creation, but Mark is apparently looking to make a small-scale model of the ekranoplan with his colleagues.

Good job, Mark. Maybe you can invent something that can get Cheez-It residue off of my futon next. I'm a mess.

Citations: Meet Mark the crazy genius who designed an aeroplane while drunk (The Guardian)