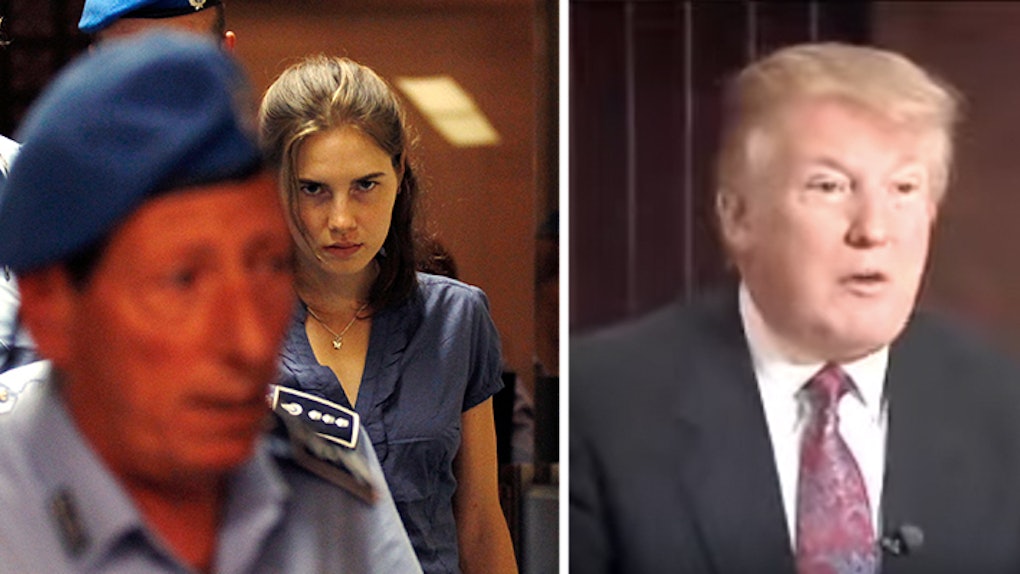 As if Donald Trump didn't have enough weird cameos to his name...

(By the way, if you haven't seen his appearance on WWE, you're missing out.)

Anyway, our possible president has now made a cameo in the new Netflix documentary "Amanda Knox." No, you did not misread that.

The documentary chronicles the unsettling murder of Meredith Kercher back in 2007 in Italy, and the subsequent trial of her roommate Amanda Knox. It's not exactly a place where you'd expect to see Donald Trump.

Why is trump talking in this Amanda Knox documentary — lauren (@cullins_l) September 30, 2016

And yet the documentary includes video from an interview Trump did, outraged that Amanda Knox had been convicted in Italy. I can only imagine he felt this way because she's, uh, too pretty to kill someone?

He literally called for a boycott of Italy until she was released.

Filmmakers Brian McGinn and Rob Blackhurst explain how excited they were when they stumbled upon the clip with McGinn saying,

We were quite big fans of that clip when we found it.

They also go on to discuss how the way the media reported the brutal crime has a lot in common with how it discusses Donald Trump.

Amanda Knox was dubbed "Foxy Knoxy" (which is an extremely weird thing to say about a convicted murderer, but is also very outdated slang for hot), and the media basically treated her like a reality TV star.

Blackhurst explains the similarity between the two:

In America, at least, we see a lot of these themes played out in our presidential election cycle as it's happening right now. The media is far more interested in reporting on the number of times that Donald Trump makes some sort of salacious statement and yet the majority of the media isn't largely worried about the facts of what he's talking about or his policy or is he a viable candidate.

The quote they put in the documentary comes from the interview below. As Sydney Morning Herald points out, it's eerie just watching this video of Donald Trump before he had serious aspirations in politics.

In it, he explains he had been watching the news about Amanda Knox and  said,

After watching it for a while, I thought: This is not a guilty person.

Wow, such wisdom, such rigor.

His reasoning for his defense of Knox:

I'm good at judging people. I study people, and I became rich because I understand what people are about.