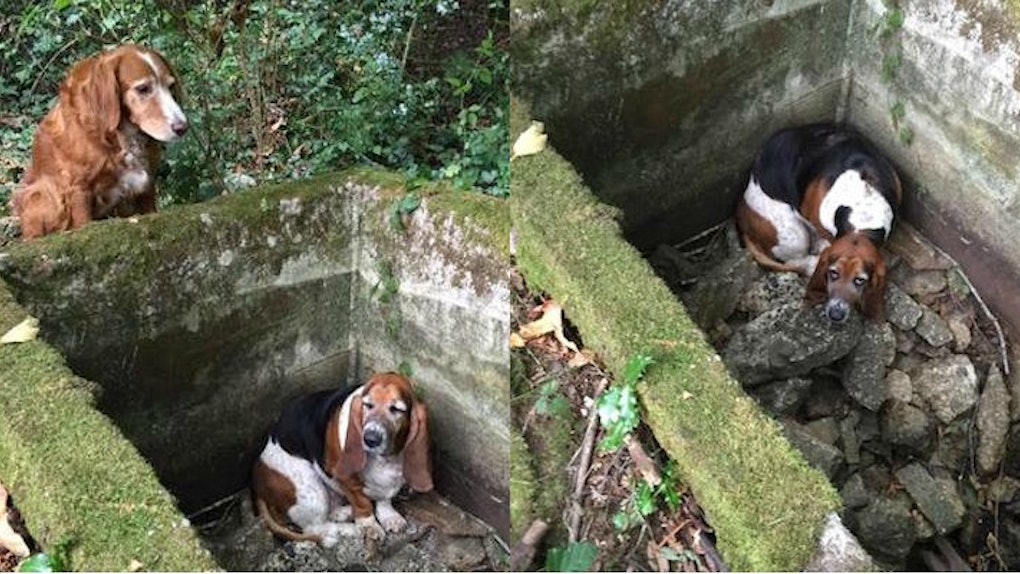 Surviving a week in the woods with no food or water is a difficult task for even the most resourceful human. For a dog, it's near impossible.

That's why some folks are calling the successful rescue of two pet dogs from the Washington wilderness a "miracle."

It's not clear how Tillie, a setter, and Phoebe, a basset hound, got lost in the wild. But at some point, Phoebe fell into a deep concrete ravine and was unable to climb out — and that's when the situation went from bad to worse.

With no humans around to help them, Tillie stood watch for an entire week to keep her pal safe. Then, on September 14, the setter's canine instincts took over and she set out to find help.

Volunteers for nonprofit animal rescue Vashion Island Pet Protectors received a call from nearby homeowners who said a reddish-haired dog --  later identified as Tillie  --  had repeatedly come onto their property and run up to them, before turning around and heading back into the woods.

Volunteers dispatched to the scene found Tillie, who led them straight to Phoebe. Still trapped in the ravine, Phoebe was hungry and visibly shaken  —  but, incredibly, alive.

Both dogs were rescued and are doing well.

It's rare for stories like this to have such a positive outcome, and if it weren't for Tillie's tireless efforts, the ending may have been much different.

A round of applause is in order for all of those involved in this miraculous rescue.