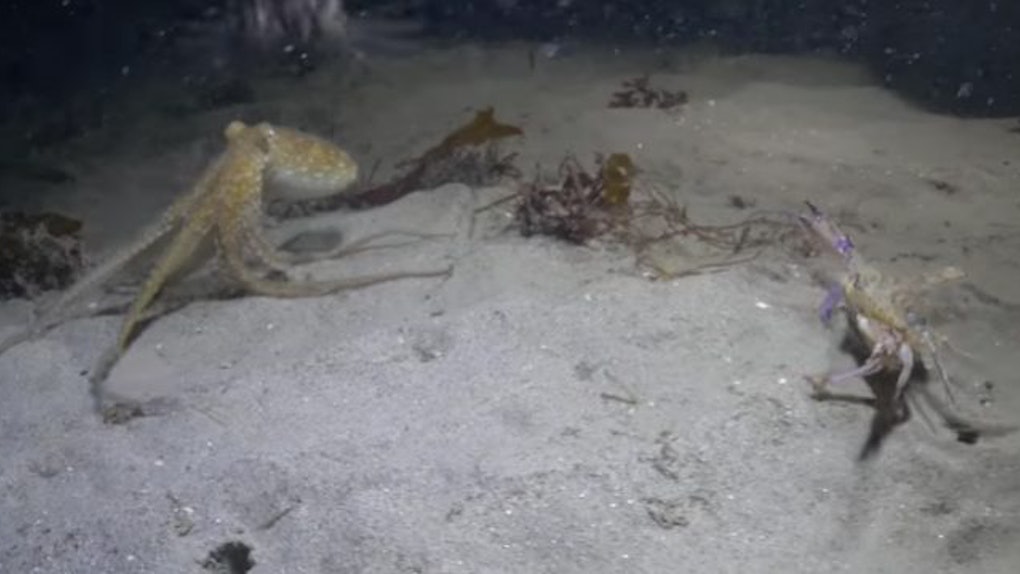 This Crab's Epic Battle With An Octopus Has A Twist Ending

Every time I watch a nature documentary or a short clip on the internet (because who has the attention span?), I think to myself, "I am so glad I am a human."

My anxiety as a human is already bad enough.

Now, imagine if I were some other animal who was lower on the food chain.

My fight or flight instinct kicks in whenever there's an unknown number calling my phone. I would be constantly worried about someone higher up eating me.

At least, it's not some creature with eight tentacles coming at me like I'm a delicious meal like this crab.

On February 10, 2017, scuba divers were filming a battle between a red octopus and a swimmer crab.

The 'pus was obviously going to come out victorious until a third player joined in...

A seal, which the divers nicknamed Whiskers, recognizes the divers from their past trips and often uses their light to help hunt for fish.

While diving, we were surprised by our friend, 'Whiskers,' the harbor seal, who often shows up when we dive at night. Whiskers has learned to use our dive lights to help hunt fish, and having Whiskers show up is not an uncommon occurrence. After a while, Whiskers was gone and my eye caught some action going on to the left, and I realized that a red octopus was chasing a swimmer crab around the sand. I immediately split off to go investigate and film, and Patrick followed. It was a great battle until Whiskers showed back up.

Look at these weird dogs that are wet all the time.

They're basically me when my mom shouts that supper is ready.

Citations: This Battle Between An Octopus And Crab Comes Complete With A Hollywood-Style Twist Ending (Uproxx)