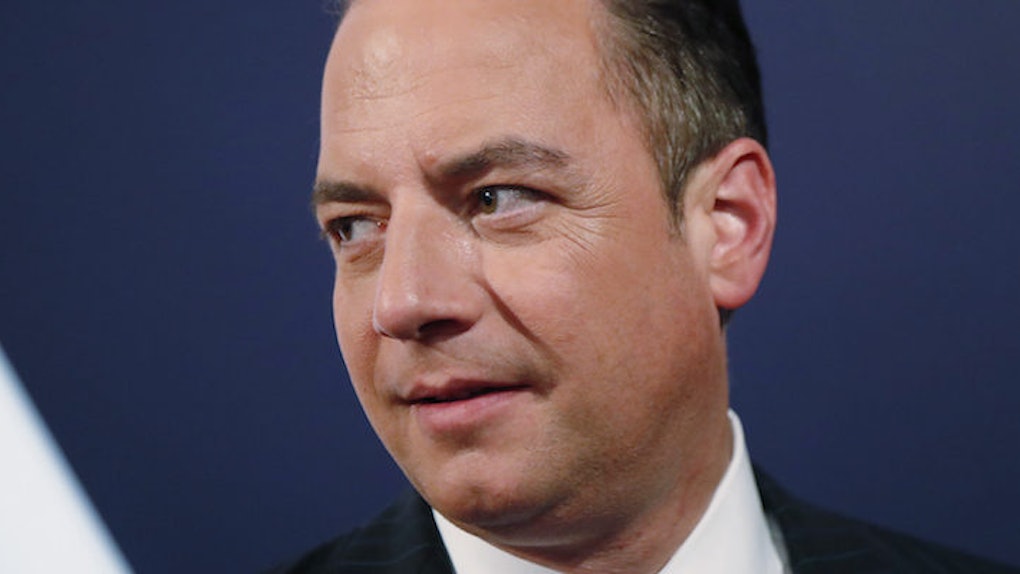 OK, if you don't know what the White House chief of staff does, he's this guy from "The West Wing":

If that doesn't help — because you only like shows with vampires holding smart phones — the chief of staff is the highest-ranking employee in the White House.

As ThinkProgress points out, some believe it is the “second most powerful job government," according to James A. Baker III, who held the job under Ronald Reagan and George H.W. Bush.

The reason is that the chief of staff is essentially tasked with doing part of the president's job for him (or, one day, her).

So when Donald Trump's chief of staff, Reince Priebus — a name which we can all agree sounds A LOT like a Syth lord in an unsanctioned "Star Wars" book — says that the president-elect's “default position” on climate change is that “it is a bunch of bunk," it means a great deal.

Now, apart from the fact that perhaps the second-most powerful person in the country says things as uncool as “bunch of bunk,” this only reiterates, beyond any reasonable doubt, that Trump will spend the next four years neglecting the environment.

Of course, the most significant display of Trump's complete disregard for the environment is the fact that he has appointed a climate change denier as the head of the Environmental Protection Agency, which is literally like appointing a Scientologist as the head of a psychiatric hospital.

Now, I know that the very word “environment” is drenched in a liberal odor at this point — which is, of course, hilarious, considering that we all live in the “environment” — but think about it like this: Environmental science is one of the ONLY places where, for non-religious reasons, huge parts of the population, and basically half our government officials, think, “Eh, screw science.”

Let me put it like this: Would you trust a president who openly said that taking medicine when you're sick is “a bunch of bunk”? If you would, you are probably in a cult.

Seriously, it is no different. Nearly every scientist alive says that we are having a negative impact on the environment, and there will, and have already been, major consequences of this.

Consequences not just to human lives and misery/pain/heartbreak/death and other liberal stuff like that (sorry, Republicans, I couldn't not throw that burn in there), but fiscal consequences as well.

FISCAL CONSEQUENCES! DO YOU HEAR THAT TRUMP? MONEY!

Look, to be honest, I think Trump is generally a very smart person.

He's not an idiot, and neither are many of the Republican leaders. They aren't scientists, just like I'm not. I would not presume I know better, in the same way I would not presume to know how to correctly perform heart surgery in front of a doctor.

The issue really is that global warming's effects are really going to kick into fifth gear a generation from now. This is something all parties need to recognize.

By ignoring the issue, they're sacrificing well-being of a bunch of people who have probably not even  been born yet.