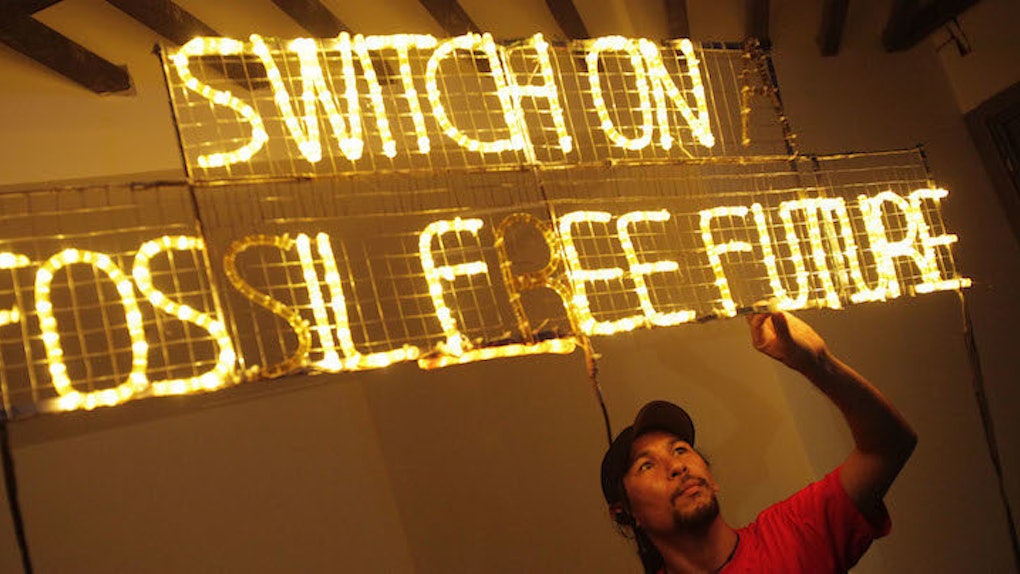 How The Clean Power Plan Helps The Divestment Movement

On August 3rd, President Obama and the Environmental Protection Agency announced the Clean Power Plan, which is a crucial and historic move in cutting carbon pollution and our country’s contribution to climate change.

In a video posted to the White House’s Facebook page, President Obama narrates the problematic issues we’re facing due to climate change.

The Clean Power Plan helps to reduce our country’s contribution to these imminent consequences by cutting carbon emissions. The plan sets achievable limits on carbon pollution for power plants, along with specific goals for each state, reflecting each state’s energy mix.

Although the plan says nothing about divestment from fossil fuels, I think grassroots divestment efforts should use the Clean Power Plan as leverage for convincing universities and institutions to divest from fossil fuel investments, helping to cut the power of carbon-polluting companies.

Why does the plan matter?

Power plants in the US are the nation’s largest source of carbon pollution.

By setting new standards for modified and reconstructed power plants, implementation of the Clean Power Plan will cut significant amounts of carbon pollution and the pollutants that harm health via soot and smog.

The standards include flexibility and time allowances specific to each state, which will optimize pollution reduction without jeopardizing reliable and affordable electricity supply.

On a global political scale, this puts the Obama administration and the US in a more positive light in anticipation of the UN’s December meeting on climate change mitigation in Paris, the COP21.

The administration had already pledged to cut overall carbon emission 26 percent to 28 percent by 2025, compared to 2005.

The Clean Power Plan sets cuts at 30 percent to 32 percent by 2030, with incentives for states that reach targeted levels earlier.

It was previously predicted that to reach these target cuts, it will cost $8.8 billion annually.

However, the Obama administration vows these estimated costs will be greatly outweighed in savings from fewer asthma attacks and other health benefits, not to mention growth in renewable energy industries.

Does the plan cut fossil fuels?

Well, of course. The plan aims to reduce carbon pollution emitted from power plants that burn coal, natural gas and oil. These are converted into energy we use like electricity.

This being said, fossil fuels will continue to be critical components of the nation’s energy future. The plan just ensures that fossil fuel-fired power plants operate more efficiently and cleanly.

Divestment is a general term for the opposite of investment, like pulling your cash from an account, or getting rid of stocks, bonds and investments in a particular economic sector that is unethical or morally ambiguous.

Relevant to climate change, divestment from Fossil Fuels is an important movement sweeping the world and gaining traction everyday, as climate change worsens every day.

Organizations such as GoFossilFree.org encourage campaigns for larger institutions and universities to divest their endowments from fossil fuel investments, which compile large portions of many multibillion-dollar entities.

Sit-ins, protests and vehement letters from students urging their universities to divest from fossil fuels have been ramping up in intensity over the past year, from Swarthmore and Tulane to Yale and Harvard, where one student was arrested for refusing to leave the administration hall while protesting.

And it's not only students. "Even prominent politicians and public figures are supporting the need to leave coal, oil and gas in the ground through divestment," says 350.org cofounder Jamie Henn.

Institutions including the World Bank, the International Energy Agency, the Bank of England and HSBC have attested that to mitigate climate change by capping the rise of global temperatures at two degrees Celsius by 2050, roughly 80 percent of known fossil fuel reserves must stay underground.

The Clean Power Plan doesn’t even mention the possibility of the US divesting from fossil fuels, as it’s impossible for our country to do this right now.

But as members of the Millennial generation, we must see our country’s ultimate goal as divestment. It may not happen in our lifetime, as fossil fuels will remain key energy sources for decades longer, but the amount of fossil fuels used is still up for debate.

As a member of Princeton’s Divestment campaign and witness to the debilitating, slow and uninspiring responses from the investment administration to hear our group’s pleas, I left Princeton feeling disheartened that my alma mater will take a long time to divest from fossil fuels.

I thought that obtaining Professor Peter Singer’s signature for Princeton’s Divestment campaign would be a critical leverage point for discussing the possibilities with Princeton’s endowment and finance administration.

But, at least I know the most respected experts on the issues of climate change and ethical divestment, including Professor Singer, are pushing ground-roots efforts of university divestment.

Over 2,000 researchers, professors and scientists of Academics Stand Against Poverty attest:

"It is unethical and untenable for universities, that seek to advance global development and health, to invest in the fossil fuels that cause climate change."

Despite this, there’s still a lot of work to be done by students. Prominent figures and experts can only do so much.

That being said, the movement is growing nation and worldwide, and with the Clean Power Plan, I hope there’s more incentive to jump on the bandwagon of a clean and better future by divesting from fossil fuels.

Look into your school’s divestment campaign, or start one if it doesn’t already exist.

Who’s excited to see what our country’s carbon emissions are in 2030? I sure am.