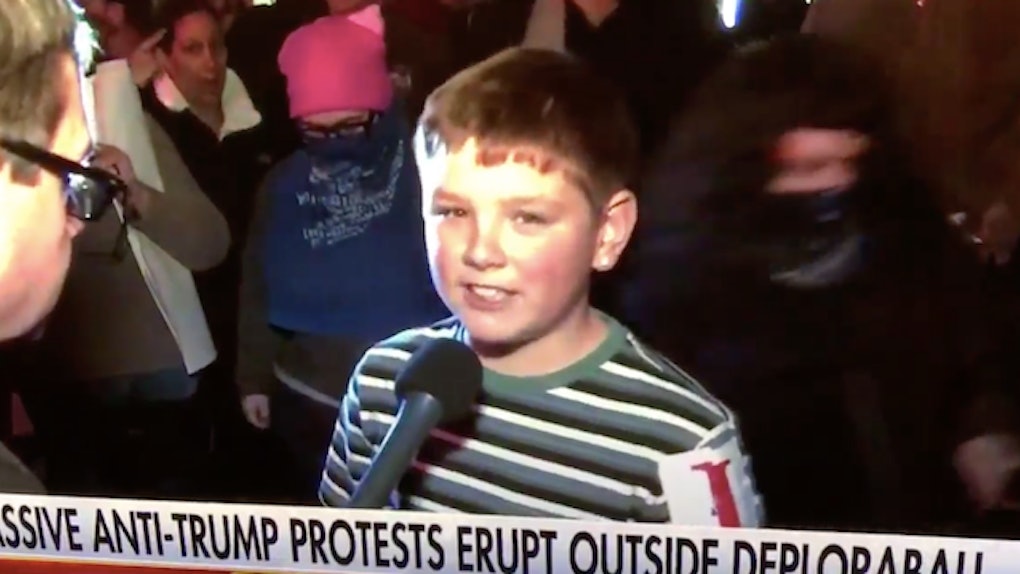 Boy Shouts "Screw Our President" About Trump On Fox News

Guys, you might not have heard, but there's a pretty massive and historic event happening today.

Millions of Americans will be celebrating Donald Trump's inauguration as president -- but for just as many, today is a day of fear, uncertainty and sadness.

And, in a brilliant TV interview, one kid has managed to sum up all our feelings of frustration and anguish with three simple words,

It's so simple, right? Screw. Our. President.

The new motto of Inauguration Day came when Fox News went along to an anti-Trump protest so they and their viewers could get angry about it.

Some of the people protesting had set fires -- making Fox's reporter even more angry -- and while I don't condone setting anything alight, it did lead to this hilarious moment.

I'm not sure why the reporter decided to interview the boy live on camera. I mean, it seems like the kind of thing that can only go badly for him.

This is what happened:

Here's how the interaction went down.

The reporter kicks things off by saying, “This young man, you were participating in the fire, what's your name?”

The kid replies, “My name is Connor and I actually kind of started this fire."

Everything's going fine at this moment. Sure, it's a little tense, but it's good TV without anyone embarrassing themselves.

But that changes when the reporter gets the boy's name wrong. Rookie mistake.

This is where our hero really comes into his own. With a sassy eye roll, he says, “It's Connor," before WAITING for the inevitable apology.

It comes, and the reporter repeats his question,

Sorry, why'd you start that fire?

Because I felt like it and because I'm just, er, saying, 'Screw our president.'

I'm going to put it out there -- that one sentence alone will probably be more eloquent and, well, just better than Trump's address in DC.

Citations: This Boy Who Started A Fire During An Anti-Trump Protest Has Gone Viral (BuzzFeed)