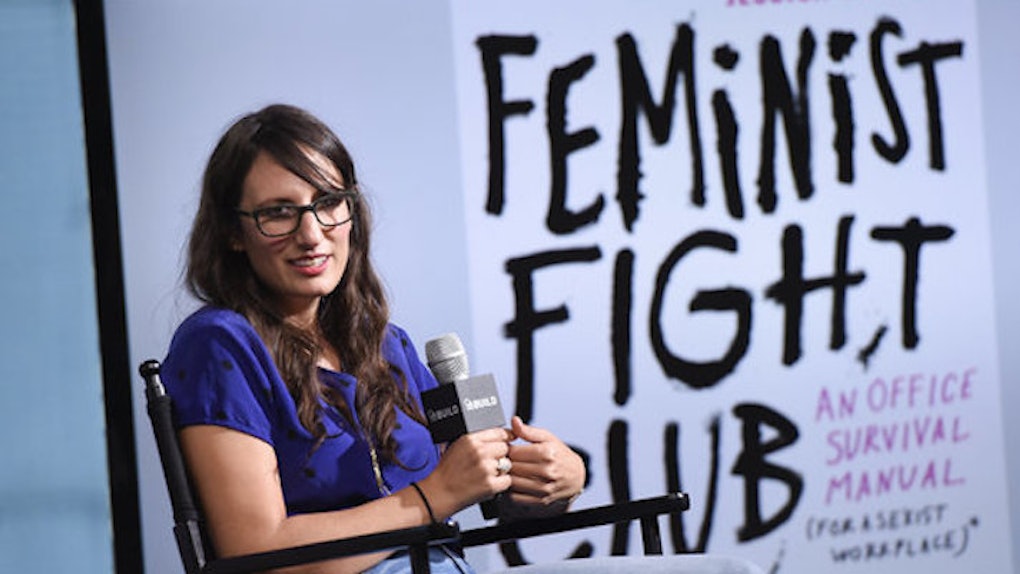 What To Do If Your Boss Is A Sexist Prick, As Told By 'Feminist Fight Club' Author

She was working as a staff writer and found when she pitched ideas, they would often get shot down.

But then her ideas would show up in the publication -- written by a man.

It's an issue women across industries face in the workplace, along with men interrupting women frequently, overlooking women's contributions and countless other problems.

What do you do when you're not listened to and don't get credit? When can you identify something as a pattern of sexism and not just a mean boss?

To answer these questions, Bennett formed a Feminist Fight Club.

She's been meeting with a group of women since she started her career about a decade ago.

Together, they discuss solutions to problems in the workplace specific to women and help each other in the office.

Bennett put those solutions in writing in her new book "Feminist Fight Club."

She told me she wants this book to be like a reference for young women in the workplace. If you come across a problem at work, you can check the book to see what "tactics you can use in the moment to fight the bullshit."

There's been a lot of talk about sexism in offices and how women can lean in to rise up.

But those discussions are often about identifying problems -- and tend to be written for women in upper management and later stages of their careers.

Bennett wanted to give solutions to young women. She said,

There's always discussion about a lot of the problems, but not necessarily the solutions.

Above all, Bennett wants young women to work together, not compete apart. That's how we can make changes -- by doing things like identifying patterns of behavior to see if an environment has issues with gender, as well as helping each other rise together.

Bennett also spoke to Elite Daily to answer questions from our readers about some workplace problems, including combatting "bropropriation."

She talked about solutions to common problems, like men calling women "honey" and other terms in the office.

Sexism isn't limited to offices, either. Women in classrooms have to deal with this, too.

I asked Bennett, overall, what steps every woman should take to combat workplace sexism.

As "Feminist Fight Club" explains, you have to start with three simple steps.

First, you have to treat women as allies, not enemies, Bennett said.

It used to be women competed because there were limited opportunities for them in the workplace, but as we're heading toward more equality, we're not competing for the one space allotted for us.

As opportunities expand, we have to stop working against each other.

Second, you have to find a boast bitch.

This is a person at your office who speaks up for you, calling out your achievements. Bennett explained this agreement helps both of you. She said,

When a woman self promotes or brags on behalf of herself, she's viewed as being boastful and we don't like her. But if someone else boasts on your behalf, she's seen as a good friend and colleague.

Third, you need to form your own Feminist Fight Club.

Work together with your fellow women to identify and beat back against sexism in your office.

And it's not just women who should be striving to make workplaces more equal.

We need men to be involved, too.

Bennett said she expected some backlash, especially from men, who may not believe these issues of sexism are real. That's actually why she included so many references in her book to studies -- to preempt any of those arguments.

But that backlash hasn't particularly presented itself (outside of Twitter trolls, as I can attest); Bennett said men have even been showing up to her book tour stops and getting copies for themselves.

Men and women need to be thinking for themselves about how they can make offices more equal. Bennett told Elite Daily,

Learning to just check ourselves in the moment is so important.

Together, we can make work a better environment for everyone.