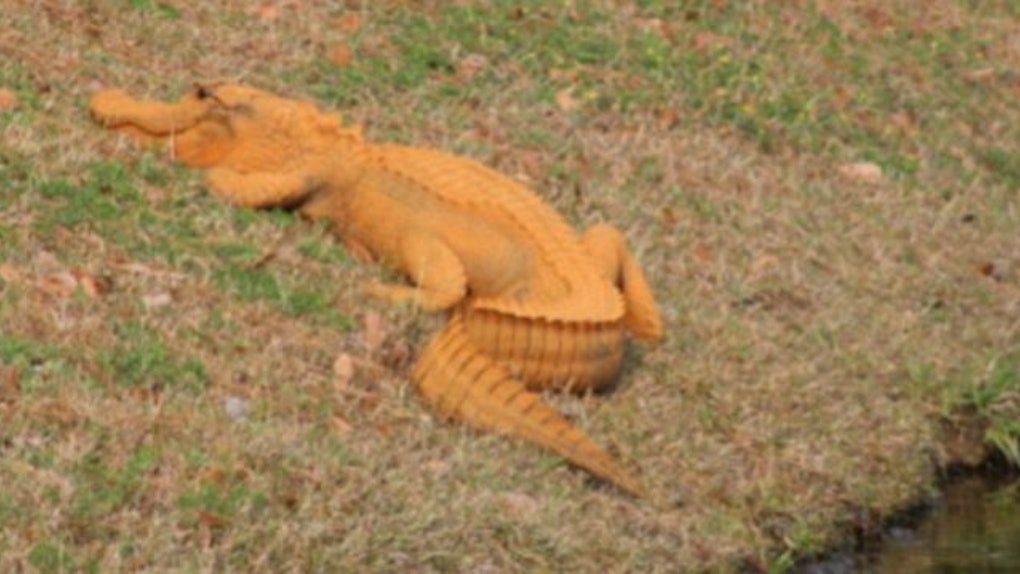 A bright orange alligator was seen climbing out of a pond in Hanahan, South Carolina on Tuesday, and it sparked everyone to make the same exact joke.

The joke is of course in reference to President Donald Trump and his uncanny orange skin. He goes to his spray tan person and asks for the "Cheeto Dust" hue.

People can't help but draw the correlation to the orange gator, which also looks like it had been spray-painted an unnatural tone.

While "Trumpgator" isn't an overly clever name, it seems to work well enough.

The orange tint is probably from the clay on the river bed or an overgrowth of algae pollution.

Personally, I still like to think this alligator gets his tanning done at the same place Trump goes to.

And since the internet is always searching for their viral hit, someone gave Trumpagator/Trumpgator its own Twitter account.

Locals say the alligator is between 4 and 5 feet long and totally orange.

There are no reports on whether it has large hands or not, but if it's like Trump, we're going to go with no.

Stephen Tatum, the man who first spotted the gator and took a picture, told Post and Courier,

I just thought, what the hell is that?

This is also the same thing I thought when I saw Trump was running for President, yet here we are.

Kent A. Vliet, an alligator biologist at the University of Florida, said the gator is not naturally this color, and its hue is probably due to the riverbed. Alligators can be albino or other colors like red-orange, but only in patches.

I have no doubt that animal is stained somehow. He's the color of rust.

But that hue is also not Donnie's original color, either, so...