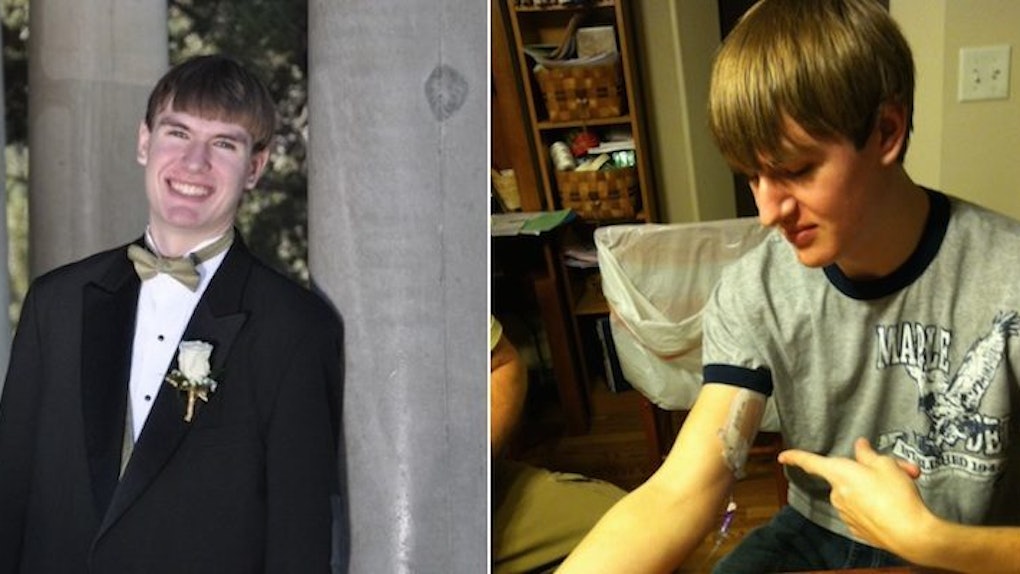 According to Daily Mail, the 19-year-old is allergic to the proteins in food and, therefore, gets his nutrients from a high-calorie formula sent through a tube connected to his stomach.

In an interview with People, he said,

I can't even put something in my mouth just to taste it, and that's hard because I remember what food tastes like. The sight of food and the smell of food -- especially something I used to love -- can make me crave it. But I don't want to feel miserable.

Alex would experience nausea in addition to bone and muscle pain after meals when he was a toddler.

His parents, Kevin and Jodie Visker, began to seek a diagnosis when Alex reached the fifth grade and was suffering from stomach convulsions.

Doctors were bewildered, however, and could only offer constipation and anxiety as possible answers.

It was around this time when the family came upon Dr. Gerald Gleich, a Salt Lake City dermatologist.

The medications were a big help, but Alex was still forced to miss over 300 days of school and is still plagued with torturous bouts of hunger.

He managed to keep up a 3.6 GPA, but he was quite fatigued. It doesn't help that he can't go anywhere with strong scents or chemicals – they cause a reaction. In the 10th and 11th grades, he pretty much lived in bed.

He remains optimistic, however, and is looking to take online college courses in computer programming now that he recently graduated from high school.

Alex, whose condition is yet to be given an official name, even volunteers to cook for his friends.

I don't want anybody to feel bad about eating in front of me.

Friends and relatives set up a GoFundMe page with the goal of raising $30,000 for Alex's education as well as treatments insurance does not cover.

Citations: Teenage boy told he can never eat again after learning that he is allergic to ALL food and just one bite can send him into anaphylactic shock (Daily Mail), Utah Teen Discovers Hes Allergic to Food I Remember What it Tastes Like That Will Have to Be Enough (People)