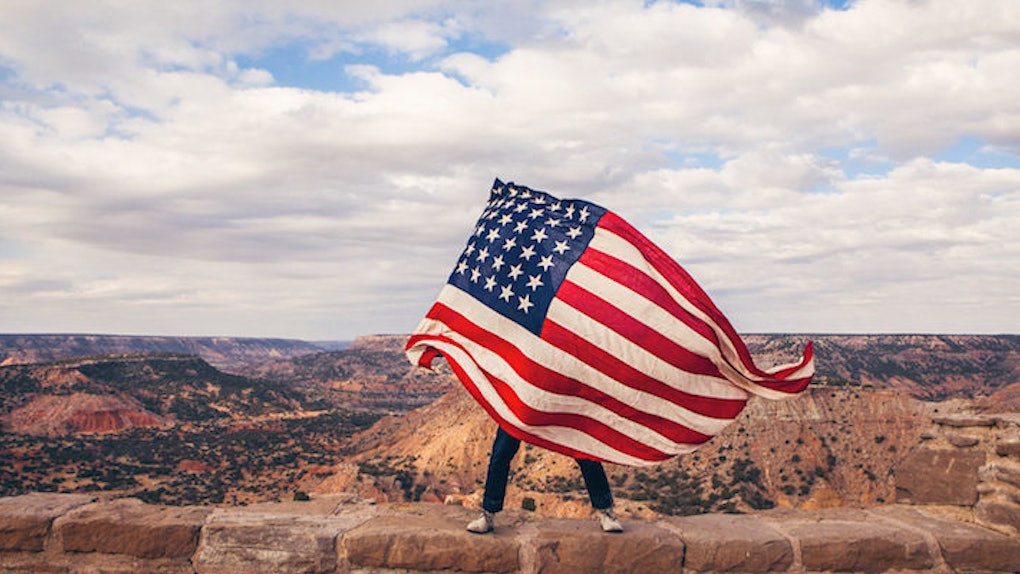 Coming Of Age: How 9/11 Accidentally Helped Shape This Generation

I often feel guilty about how easily I can avoid thinking about it; how effortlessly my subconscious protects me from latching onto those images, sounds and feelings.

But, then, the anniversary creeps up each year and I work up the nerve to remember; to accept the grief of that tragic day.

The fact that it's been 14 years since the attacks on September 11, 2001 makes me feel — among other, more complex reactions -- very old.

This is the first monumental world event I've lived through, one my niece and nephew will eventually learn about in social studies class. It will exist for them only as a section in a text book or the subject of a research paper. It will be distant, static.

They will know it's important, sure, just as we know the importance of JFK's assassination and the attack on Pearl Harbor. But, it will feel resolved to them; it will be intangible.

Social studies is where I was, in fact, carelessly swinging my legs as I sat at a desk in a bright classroom. I was 12 years old, and wearing what I considered very impressive "flood pants" from Old Navy.

My braces matched the hot pink t-shirt and flip-flops I laid out the night before, and my hair was in a high ponytail.

We were giving presentations in class that day on our individual histories, on the stories of our lives thus far. Everyone was sitting around and settling into their desks, talking about what sentimental items they brought in to discuss.

A friend and I plotted to convince our moms to take us to the mall that weekend. In true New Jersey fashion, we planned to walk around, maybe sample scented lotions at Bath & Body Works and get cinnamon pretzels.

So when the principal’s nervous voice suddenly came out of the speaker box, most of us in the classroom were sufficiently uninterested.

It was suburban New Jersey, just a couple dozen miles from New York City. A lot of people’s parents worked in Manhattan, some even in the Towers themselves.

So, it would have made sense for us to react in some sort of intense, instant way, but we didn’t. Everyone just carried on talking about the presentation, and how badly we didn’t feel like changing for gym later in the day.

“A plane has flown into the World Trade Center.”

Of course, we heard what was said. We knew what the WTC was; we knew something was wrong.

But maybe, we assumed it was an accident. Maybe, on some collective level, we were protecting ourselves, biding just a little more time before we were forced to confront the piercing reality that was upon us.

We wouldn’t really start to absorb the news until the next announcement a couple of minutes later.

The principal told us to go wait in the gym with the rest of the students and teachers until our parents picked us up, and that grief counselors were available for anyone who might need them.

September 11 belongs to (broke the hearts of) all Americans.

But the events of that day struck a particularly raw, tumultuous nerve in the Northeast.

Not being able to contact or confirm the safety of tri-state area neighbors, colleagues and relatives created a palpable, real-time panic that resonated with even our most aloof local residents.

It had only taken the short walk over to the gym for us to overhear faculty members talking; we finally began to grasp what happened.

One fellow seventh grader, a boy I considered stoic before I even knew the word existed, sat huddled into his knees on the first row of bleachers, sobbing uncontrollably.

Classmates gathered around in an attempt to comfort him, but he just cried more and began shaking his head. His father worked in the Towers at the time. Everyone immediately assumed the worst; it was hard not to.

When he returned to school the following week, he brought with him the first good news anyone had heard in days. His dad’s car broke down on the way to work that morning; he had been on the George Washington Bridge, waiting for a tow truck when the first plane hit.

Many Millennials were in middle school in 2001.

We were concerned with little more than what our next AIM away message should be, or if our fourth period teacher was going to call on us about last night's reading.

These unprecedented terrorist attacks dismantled an entire country that day, and with them, for better or worse, they helped configure an entire demographic.

Maybe, Millennials were always destined to become a balance-hungry, passion-prioritizing generation; or maybe, the events of 9/11 soberly bound us to each other and, out of emotional necessity, to the world around us.

Adults clumsily carried on living in the days and weeks that followed the attacks, helplessly trying to understand, retreating again into hopelessness upon learning each disturbing development.

Suddenly, our already-protective parents became even more fiercely, anxiously determined to shelter us from potential harm.

Students were now allowed, even encouraged, to bring cell phones to class as a safety precaution. Up and down the East Coast, annual school trips to Washington, DC were canceled. Education administrators started implementing website and email notifications to alert families of emergencies.

There was a lot of scrambling and a lot of uncertainty; no one really knew how to proceed.

Even the most benign interactions with colleagues, store clerks and neighbors were shrouded in caution.

A family friend was featured in Time magazine for heroically helping his coworkers down to safety from the 60th floor. But, several others in my town lost spouses who had simply left for work that morning, and children who were enthusiastically starting their careers in Manhattan.

There was no safe way of knowing just how broken 9/11 left someone, how deep or raw the wounds were.

Even as children, this was the first time most Millennials had felt unsure of anything, ever, let alone if and/or how to approach a somber Barnes & Noble employee. We were no longer safely coddled within the confines our cul-de-sacs and our extracurricular activities.

Our parents no longer had all the answers, and I think that revelation served us as much as it initially frustrated us.

My mother sat on our couch with tears in her eyes, while the news played what seemed like a horrifying loop.

I couldn’t believe they showed footage of people jumping from the burning towers. It was the most disturbing, chaotic, terrifying thing I had ever seen.

Local radio stations stopped playing music for a couple of days; even our dog seemed depressed.

I looked at my mom as she watched the television, desperate for whatever explanation she could offer, but her tears just intensified when we locked eyes.

Millennials watched our parents retire the brave faces they usually wore for us. We watched everyone in the United States experience the same kind of swift, powerless confusion.

A sort of nationwide support group emerged, a fiercely patriotic, determined collective that moved slowly but surely toward some version of resilience.

For our country, that kind of grief hadn't been felt since Pearl Harbor. But for Millennials, this was the first time most of us had ever, in our lives, come face-to-face with high-stakes vulnerability, with fear.

On top of all the grief-laden clambering that followed 9/11, a slow-boiling hate also surfaced, the likes of which I had only ever read about in history books and novels.

Some people decided that clinging to ignorance, casting ill-informed, superficial blame was somehow justified because of the universal pain around them.

That was another lesson Millennials learned, I suppose. Human nature can sometimes be disappointing, and people can be illogically cruel. Even when you expect them to seek out and offer kindness, many will do just the opposite.

My friend and neighbor started getting bullied on the bus for continuing to wear her hijab to school after the attacks.

Policy makers, desperate to provide answers, made the dangerously uninformed mistake of turning the Muslim-American population into a political talking point.

I like to think that for Millennials, though, witnessing that reckless, confusion-fueled rhetoric ultimately just contributed to our heightened sense of empathy and appetite for tolerance.

As a means of adapting to a post-9/11 world, and as the result of ever-increasing access to social technology, our generation's worldview is not surprisingly filtered through a lens of collectiveness, of global and emotional awareness.

We have an unwavering desire for the growth of ourselves as individuals, yes, but we also demand the success and improvement of the larger community around us.

Years have piled on since the Towers came down. Those seventh graders have become tax-paying, life-living adults, and thousands of grieving families have slowly pieced their lives together again.

For some, the idea of "9/11" has been reappropriated into just that: a shapeshifting ideology, a buzzword.

While its specific intentions vary depending on those utilizing it, its mention generally seems to seek a a unified, emotional response attached to either a call-to-action or larger-scale policy change.

For Millennials, though, it didn’t always seem so political, so broad.

To us, the disorienting experience of 9/11 remains personal. It represents our first encounters with vulnerability, with unpredictability, with triumph.

That day stayed with us as we came of age, as we formed opinions, as we decided what we would value, scoff at, be afraid of and overcome.

At first glance, many dismiss our generation as a fickle, impulsive, contradictory group.

We book last-minute trips with money we don’t have yet; we abandon anything that leaves us uninspired; we document and share as many of our memories, as much of our life's evolving story, as possible.

But, these so-called flaws of ours are at least partially rooted in the abrupt reality we were met with on that sunny Tuesday 14 years ago.

Before September 11, most Millennials had never seen physical or emotional wreckage with our own eyes, felt the fear with our own hearts, seen the evil impact our own backyards.

When the Towers were attacked, most of us weren’t done growing up, not by a long shot.

In the midst of that malleable time, we were bombarded by the harsh truth that sometimes, the human experience can be senseless.

Sometimes, violence and heartbreak are arbitrary. Sometimes, out of nowhere, every single thing you know changes.

Each year, I let myself reflect on what happened. While I know that sifting through my seventh grade journal and rereading sob-inducing news articles won’t make me suddenly comprehend the still-perplexing nuances of that day, it’s become something of a comforting habit.

September 11 took a lot from us, but it also gifted us — Millennials, especially — with a unique responsibility.

With no warning, in the middle of our otherwise-charmed childhoods, we saw behind the curtain of the human experience. We were suddenly privy to how drastically and devastatingly things could shift.

That sense of urgency that lives within our generation? Maybe, it's not accidental; maybe, it's supposed to serve as a reminder.

Maybe, we live our lives with borderline-delusional courage, unconventional work ethics and a ferocious need to customize our futures.

This is not because we have no regard for the gravity of life, but because we are all-too-familiar with its fragility.