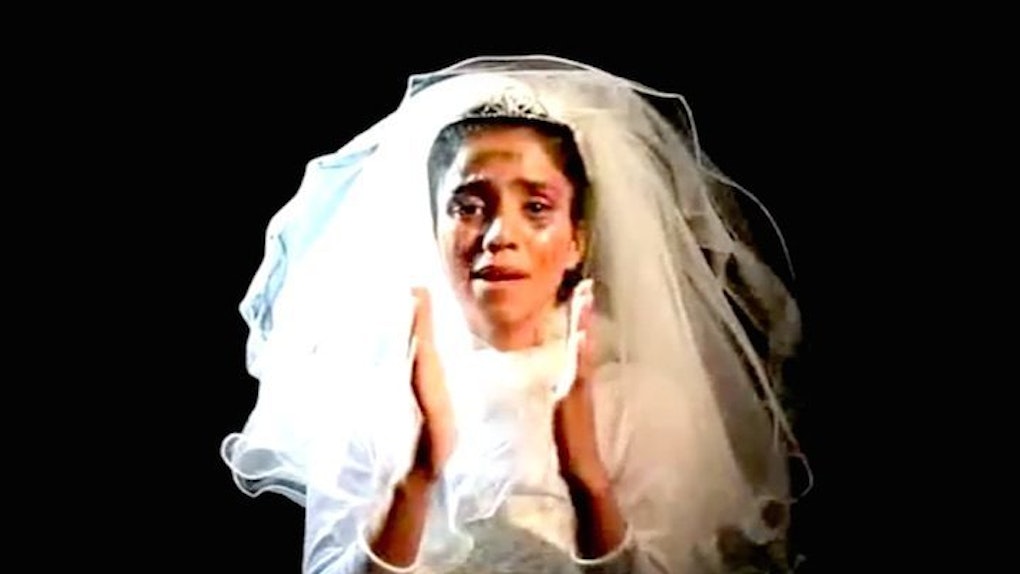 When Sonita was just 10 years old, she says her mother had already started discussing deals to sell her to a man to be his wife.

The practice is common in Afghanistan, even among girls who plead with their parents to let them make their own decisions on how their futures will play out.

Sonita says when she was back home she watched many of her friends get sold off to be married to older men when they were as young as 12 years old.

This is where the inspiration for her song “Brides for Sale” comes from.

Her family eventually made the decision to flee from her home country to Iran in the hopes of escaping the Taliban's rule. Sonita recalls at the border, soldiers ordered her family to pay and threatened both her and her sister with kidnapping.

She says this was the first time she felt as though she could be classified as property.

It wouldn't be the last time, though.

CNN reports after moving to Iran, Sonita had no ID, so she wasn't able to attend school and thus ended up cleaning bathrooms at a non-governmental organization as she attempted to learn how to read and write.

In her downtime, she would watch TV and found comfort in listening to rappers like Eminem and Yas, who is also Iranian, slowly internalizing the musical nuances and stylings built into the medium.

She started to write her own music and managed to rap in secret, which is expressly illegal for women to do solo in Iran, after convincing a series of equally rebellious music producers to let her record in their studio.

Several years later, her mother, who had moved back to Afghanistan, showed up to visit Sonita for the first time in three years. What started as an emotional reunion slowly turned into a more somber occasion as she found out her mother was there with the intention of selling her off to a man who was looking to acquire her.

The reason for the sudden attempt at selling Sonita was because the family apparently needed $7,000 for a marriage dowry for her brother, and they thought the $9,000 Sonita would most likely secure for her own dowry would be enough to fund her brother's marriage plans.

When she found this out, Sonita went to writing and beat out lyrics for the song that would become "Brides for Sale."

She wrote the following lyrics:

Let me whisper to you my words So no one hears me speak of selling daughters My voice shouldn't be heard, as it's against sharia Women must remain silence, this is the tradition of our city

The video posted to YouTube gained a small following and came across the desk of the Strongheart Group, an organization geared toward helping people dealing with various social issues tell their unique stories.

She had passion and drive. We knew we could help her achieve her dreams to get an education, develop as an artist and be a voice for girls being forced into marriage.

With the group's financial and legal help, Sonita was able to leave the country and take a full scholarship to Wasatch Academy in Utah.

Though she says she doesn't hold anything against her mother, she admits she didn't originally tell her the plans to escape Iran because she was afraid of what her mother would think.

Eventually, she did inform her mom she had moved to Utah, and she says it took a little while for her mom to get on board with her choices.

That all changed, though, after she sent the check from her first concert back to her family.

Her family now encourages her music. She says,

They're even waiting for my new song.

Sonita has high hopes for her art, telling CNN,