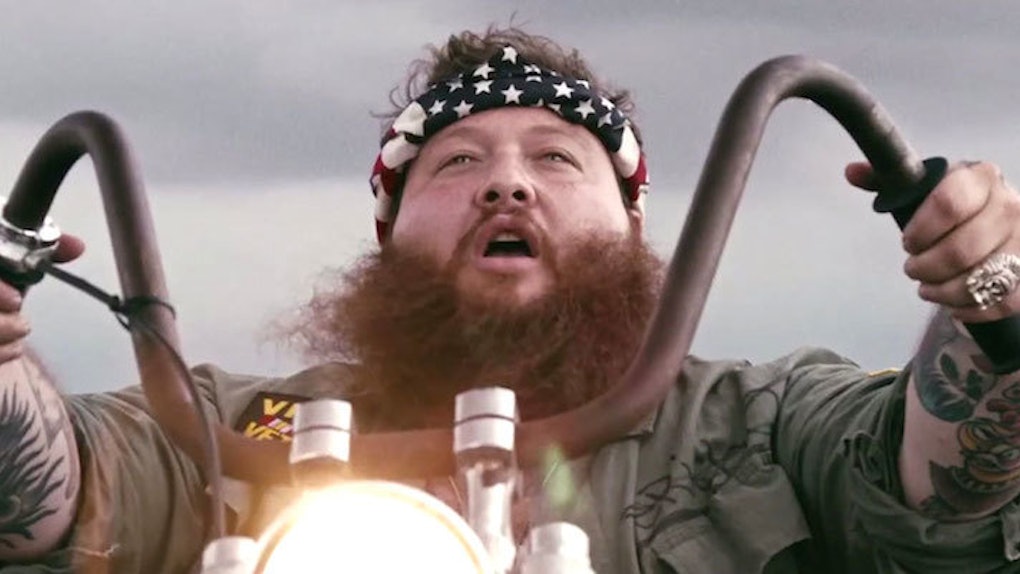 Mr. Wonderful: The Odd And Intriguing Fame Of Action Bronson

It is easy not to take Action Bronson seriously.

He is Kendrick vertically, and early Rick Ross horizontally.

He waddle-struts everywhere he goes. He smokes pounds of pot.

He has the blue eyes of a Renaissance cherub and a well-formed, curly, red beard that fills half his face. His branding is dominated by psychedelic Internet weirdness.

There is a specific vulgarity to his rhymes. Bronson spits about things most people try not to think about, but he doesn't look for shock value like a young Eminem.

Instead, he is boasting, taking care while slathering the caramel of his raspy Queens bass over boom-bap nouveau beats.

With hot lines on Mr. Wonderful like, "Pedicured foot slide in the slipper/Tryna do the remix with Pitbull/Tell the pilot to land at Schipol/Play the violin with the dimples," and, "Uh, we took acid for 10 days straight in the mountains/started running with the stallions/Playing frisbee in the West Indies/ I did the tango with my kidneys."

He raps like he is on a carved mahogany throne on an island nation that treats him like a deity, presenting the fruits of his imagination with a casual disbelief, like he's used to things he can barely understand.

He's a comic-book kingpin. He does dirty things with loose women, rides through cities like a conquering emperor and always eats the freshest exotic cuisine.

Bronson does not look like this, nor could he ever. But, he blurts the line with a sputtering confidence.

Since Bronson exists exclusively online to millions, he can remain unseen while using his all-time voice to build an image of pure, unchecked excess. His lifestyle takes on any comfort, no matter how fleeting, damaging or expensive.

Bronson says he does what he wants, and he raps with such bravado, you have to take him at his word.

After a few songs, you can no longer resist the what-could-this-guy-possibly-look-like curiosity. Then, you come to find a sweating, bellowing, swaying man with a beard and glazed eyes, and it makes sense.

Whether he's swan diving from a sailboat, or leaping off stage and rapping through the crowd like an evangelical preacher, Bronson carries himself like he never tells a lie in his lines.

His cognitive dissonance remains authentic. This aura of unfathomable opulence is his identity.

Imagining this tiny, but massive man doing these mythic activities is infinitely entertaining, but also -- I'm not sure this is the right word -- inspiring?

As he says, "Since I was young I had the husky gut, but I was gorgeous." These things aren't mutually exclusive; you can be chubby and still be the man. If I were a plump, ginger middle-schooler, I'd have his posters all over my walls.

Bronson is too weird (long experimental interludes) and too nasty ("the specialty is white snake in underwear sauce") to ever really go huge. And, he released his new album in the easily overlookable gap between Kendrick's To Pimp a Butterfly and Kanye's So Help Me God.

But, Mr. Wonderful is a delight. It builds nicely on Action's already-strong mixtape discography with long, 70s-rock digressions, loads of outlandish boasting and beats that play in the rarely used areas of the sonic spectrum.

Despite his drawbacks, Action Bronson is rare, luscious and infectious.

He's not lying when he calls himself wonderful.