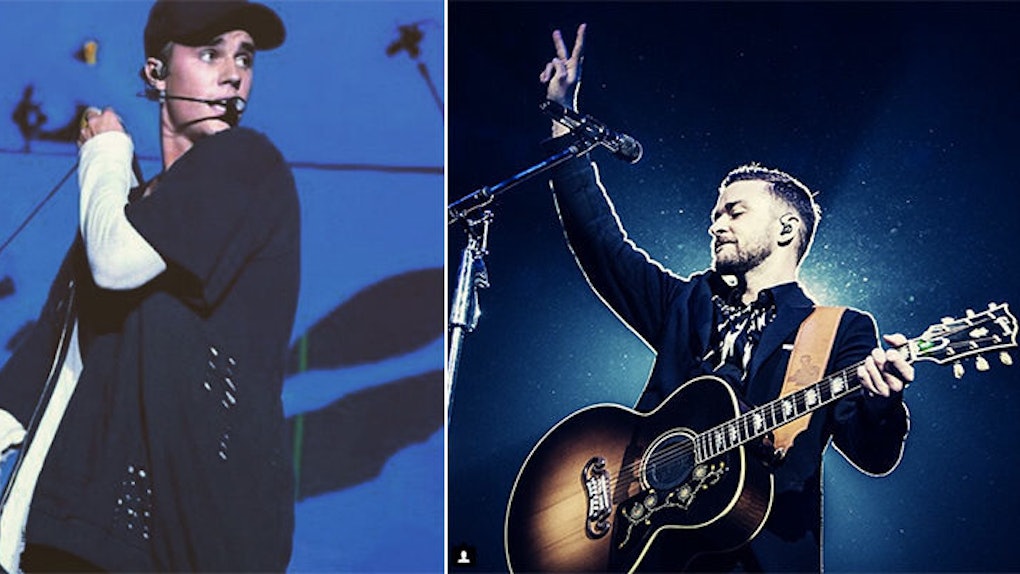 If only he could control his temper tantrums, 2015 would be the year Justin Bieber truly redeems himself.

This past week has been #BieberWeek on "Ellen," and he's been nothing but charming, super talented, funny and well-received.

He's not the little runt who was speeding all over Miami or urinating in public. He's a 21-year-old man looking to save face for the sake of his audience.

Justin Bieber, who was discovered online and became an overnight sensation, has been a part of the American lexicon of tweens, teens and adults alike who can't stop speaking about him.

He is incredibly talented, but his one consistent flaw is he doesn't know how to handle the pressure he is under 24/7.

It's hard to grow up in the public eye when you're a massive superstar in the 21st century.

Many have compared Justin Bieber to another teeny bopper turned gentlemen, the one and only Justin Timberlake.

JT, as I like to call him, started off on the Mickey Mouse Club, singing and acting along some other musical legends of my generation (Britney, Christina, JC Chasez).

He then was wrangled into the uber-popular boy band phenomenon known as *NSYNC, and of course, he became the breakout star.

Justin and his bandmates were featured on every magazine possible.

But, the information about their private lives was controlled by the label, their management and their publicists through the magazines, not through any moron with a camera phone and a social media account.

His tabloid relationship with the Queen of Pop, Brit Brit, helped him channel his inner scorned male in his 20s with his 2002 debut album, Justified, which included countless hits such as "Like I Love You," "Senorita" and the infamous "Cry Me A River."

He was tabloid fodder for many years, with paparazzi constantly following him and his romantic escapades.

There was truly no social media and online following that the Beliebers have today.

Justin's fans were hungry for information, but Justin could control what was put out about himself.

Justin's more adult, R&B sound help solidify him as a crossover act, one that had massive commercial appeal to men, women and the mass Top 40 audience that would play his music on repeat.

Of course, being the artist that he is, he took off a bit and brought "SexyBack" in 2006 with his collaborator Timbaland.

FutureSex/LoveSounds was a true album.

Each song led into the next, telling a story about moving on, heartbreak and being who you are.

He became a well-respected, sought-after musician and frequent collaborator on many club-bangers, including 2007's "Give It To Me," which was essentially one put-down after another toward the haters.

Justin Bieber doesn't need to release music to send a message to his haters.

He can do it through his various social media outlets or find the nearest paparazzo and tell the world how he's feeling.

His relationships, his hardships, his struggles and his frustrations are out there for the world to see (as well as his nudes), and he has no real control over it.

During JT's journey into adulthood, he took some time off, did a lot of movies and independent projects and focused on his fashion line, his restaurant, his philanthropic endeavors and his relationships.

He re-emerged in 2013 with his first album in seven years, the two-part 20/20 Experience, which really brought back the feel of an album, not just singles.

Bieber, on the other hand, has not had the same luck.

While he hasn't necessarily taken a long hiatus from music, Bieber has become more known for his antics than his music.

That is why Justin Bieber is on the #RedemptionTrain in 2015, putting out quality music, evolving his style and making the fans and the haters talk only about his music.

Justin Bieber had the chance to work with Diplo and Skrillex, two of the hottest house/EDM DJs in the world, and together they put out the most infectious song, "Where R Ü Now."

Not only did Justin Bieber truly bring credibility to the already massive genre, but he also showed everyone he was ready to move on to the next phase of his life.

He needed to find a mature way to evolve his style, and he did what no one was expecting him to.

His first single from his new album Purpose is the fantastic, sultry, yet questionable "What Do You Mean?" which has converted more individuals into Beliebers.

His lyrics are more adult, and they include lines such as, "When you nod your head yes, but you want to say no."

They shift the focus away from Justin as a young boy, and to a bonafide sex symbol (paired with his Calvin Klein ads). Justin Bieber has grown up in front of our eyes, and he is doing it his way.

Yes, Bieber and Justin were both teeny boppers who essentially blew up overnight, but their paths to adulthood and the second stages of their careers are much more different.

They're both talented musicians, and I do hope that someday in the near future, they can perform a duet together.

It will be the "passing of the torch" from one generation to another.

No need to say, "Sorry," Justin. Keep doing you.