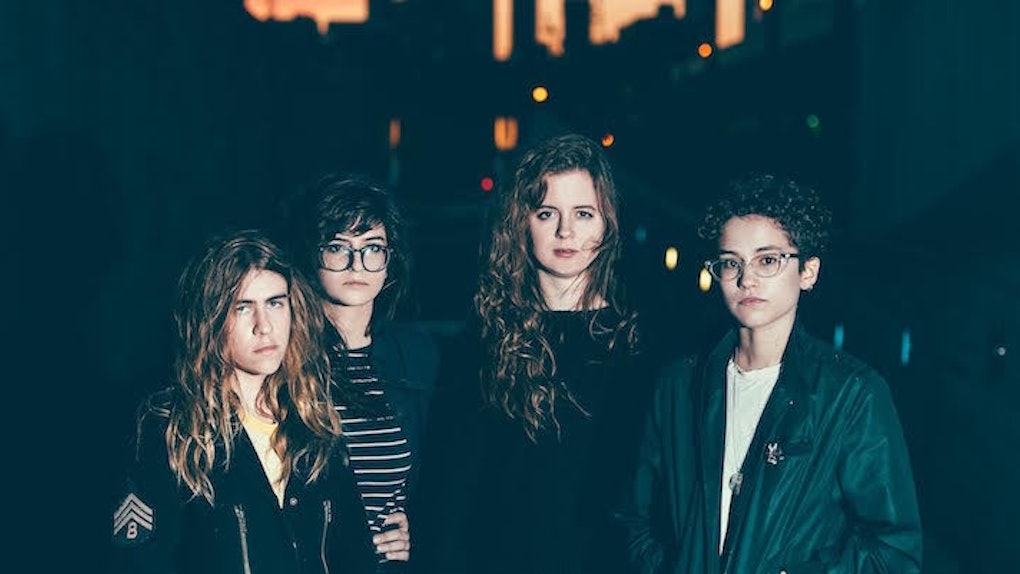 Take It From An All-Girl Punk Band, Being An Artist Is All About The Hustle

In preparation for the Levitation music festival, Elite Daily had the honor of speaking with Natalie Hoffmann, the lead guitarist for the truly badass punk band Nots.

Their current formation -- an all-girl foursome that includes Natalie, drummer Charlotte Watson, bassist Meredith Lones and keyboardist Alexandra Eastburn -- has been together for a little over a year, most of which they've spent on the road.

When asked what influences their sound,Natalie's answer was honest and refreshing, as she explained,

I would say driving in the van has influenced us all a lot... You totally listen to a lot of punk music when you're touring, but... eventually, I'm like, no, I love playing [punk] music, but I want to listen to CAN for three hours.

Let's pause this interview for just a sec and take a moment to appreciate the brilliance that is CAN.

With German experimental rock band CAN as a main influence, Nots' music has a layered quality that defies your standard definition of punk rock. That's not surprising considering Nots has been described as "weird punk" and a "nuevo no wavo" band -- i.e. a new interpretation of the late 1970s No Wave movement, which was partly an avant-garde rejection of the popular New Wave music of the time.

And on the name of the band itself, Natalie wishes it had come from a single on the B-side of a Milk 'N' Cookies album, something one fan had guessed in an email she received. Alas, she said,

The real story is that I had made a collage with a Twister spinner years ago, and the drummer said 'It ties you up in knots.' And the drummer and I, who've been playing music together for a long time, were both trying to come up with a name and I said, 'What about Nots?' while looking at the collage. And she was like, 'Hell yeah!'

And so Nots was born. Because they are an all-female band, and that seems hard to find in the music world, let alone the punk scene, we had to ask Natalie if that was a conscious choice or an organic one. As she said,

It was a conscious choice in some ways, but also, we've all been friends in some capacity since I moved to Memphis nine years ago... So yeah, it was conscious but it wasn't like it was hard, like pulling teeth asking ourselves 'Do we ask this dude or do we ask her?' Because we were all friends... and magic definitely happened once we started jamming because I think we all have a pretty similar mentality.

When asked what her day-to-day is like, Natalie explained,

All of us love to tour, but we are unfortunately not quite to the point where it's sustainable to just be a working musician, which would be the sh*t. If I could wake up everyday and work on songs, that would totally be the sh*t.

But the reality for Natalie, like many young artists, involves hustling to make ends meet while also devoting time to her art. She added,

I work in two restaurants that are incredibly understanding about my lifestyle, which is really cool. They basically let me leave and tour and come back to work for them. That being said, I would love to not work in restaurants, as cool as they are. I would love to just pursue the thing that I'm really thinking about all the time. So, typically for me, and all the other members of the band, too... you have to work these kinds of basic jobs... None of us can really have a nine-to-five designer job. Cause I'd be like 'Oh yeah, I'm going to be gone for two months, that's cool, right?'

While catching restaurant shifts isn't ideal for any artist, working around their nine-to-five jobs has had an interesting effect on Nots' process. As Natalie explained,

We practice in a storage unit. Which is a story in itself, but it's open 24 hours so we pay them, I think, five extra dollars a month to have access to the electricity.

Meeting up in the evening to practice has also posed some unique challenges, since it happens to be primetime for other bands in the building.

There are plenty of characters in the storage unit [facility]. We compete with a lot of really horrible, all-dude metal bands, like screamo bands full of thirty-year-olds... There's also a mariachi band that practices on the fourth floor.

Honestly, we could talk to Natalie all day just about her storage unit travails. But there were other things to find out about her and the band, for instance, how she manages to juggle all of her commitments without getting discouraged. (This comes from the person who's started and given up on writing a novel approximately 1.3 billion times.) Her advice for aspiring artists trying to stay motivated when times get tough?

I would say persistence. That might sound lame, but I taught myself how to play guitar on About.com. It was really silly, and I was like, I'm never going to be good at this, I can't figure out these chords all these people are doing. And then I started playing music with other people and I was like, oh sh*t, this is amazing.

Natalie also cautions not holding yourself to "some imaginary standard" of what an artist should be. If the passion is there, then there's really no other choice but to buckle down and just do it. Not to sound like a Nike ad, but if Nots' growing success proves anything, there are no other options beyond committing to your dreams.

Be sure to catch Nots playing this Saturday in the Levitation Tent right around 4:20 (heh, heh). And stay updated on all things Nots by following their Facebook page.