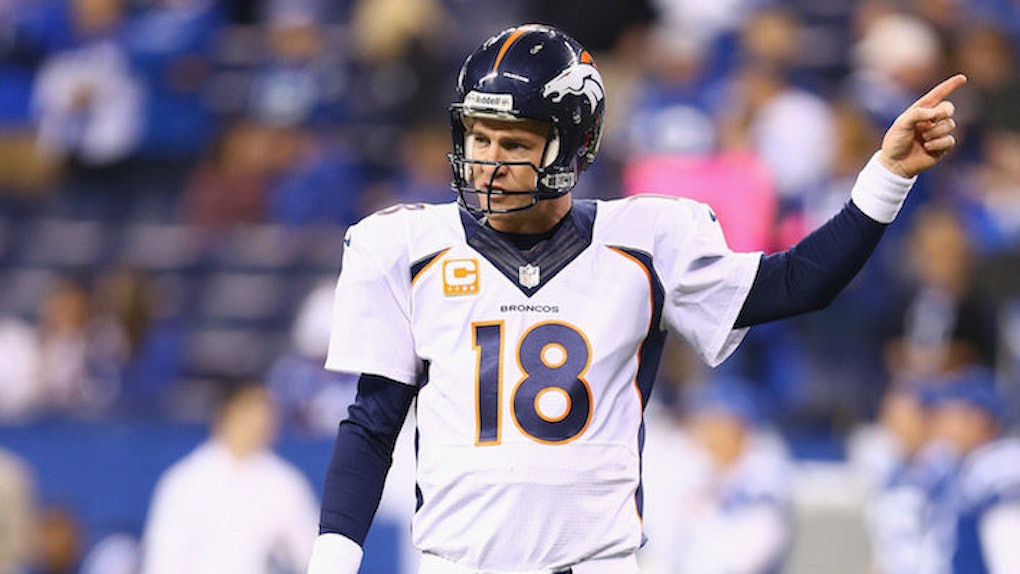 It was the first game of the season and Peyton Manning, one of the greatest quarterbacks in the history of the National Football League, already had a chance to set another NFL record.

Late in the fourth quarter with the ball on his own 22-yard-line, Manning stepped up to the line of scrimmage and surveyed the defense.

Just before snapping the ball, he noticed something.

The Baltimore Ravens defenders were moving around in front of Manning, preparing for the play, but something didn’t feel right.

After the game, Manning would simply say that he “saw something.”

Baltimore was going to blitz and Manning knew it. He took a step forward, spread his arms to signal a new play call and yelled out the play, “Alley! Alley! … Alley! Alley! Alley!”

The Broncos snapped the ball. The Ravens, as expected, blitzed. Manning threw a perfectly planned pass to wide receiver Demaryius Thomas, who ran 78 yards for a touchdown. The Baltimore defenders never laid a hand on him.

It was Manning’s seventh touchdown pass of the game, tying the NFL record.

And perhaps even more impressive, it took Manning just four seconds to step up to the line of scrimmage, analyze the location of all eleven defenders, compare their coverage to the play he had called, recognize that they were preparing to blitz and then call a new play. All that, in just four seconds.

Let’s talk about how Peyton Manning can do that and how you can develop expertise in the areas that matter to you.

In a variety of studies, researchers have shown that website visitors have learned to ignore the common areas of webpages loaded with advertisements.

In many cases, the readers breeze right past the advertisements like they aren’t even there. Known as “banner blindness” this phenomenon essentially says that as you read more articles online, you learn to ignore the irrelevant or unimportant pieces of the experience.

This basic idea, that you can focus on one part of an experience and ignore others, is a cognitive psychology concept known as selective attention.

It’s also called the “cocktail party effect,” which is named after the idea that your brain can pay attention to a single conversation while standing a crowded room full of people talking.

Selective attention helps you filter out the noise and focus on the signal.

Selective attention is what allowed Peyton Manning to instantly assess the Baltimore Ravens' defense and change his play call accordingly.

Manning has put in thousands of hours playing the game, studying film of opposing defenses and learning from his mistakes.

As a result, his brain instinctively knew what the signal was and what was just noise. He knew what to focus on and what to ignore.

The result is that Peyton Manning can make snap decisions that are based on thousands of hours of experience. While a young quarterback might see a dozen possible options for what will happen, Manning can narrow it down to a few options — perhaps even one — by paying attention to the right factors.

The result is increased success, and it’s a major difference between amateurs and experts.

The Truth About Hacks

It seems that the world is obsessed with quick fixes and performance hacks. I get it, I’ve felt that way, too. We all want to “hack” our bodies and brains to find hidden solutions to mastering our mental and physical performances.

The thing is, when you look at how the top performers in the world operate and examine what is really happening in their minds and bodies, you often see the complete opposite of a hack.

You see repetitions and consistency.

When LeBron James wants to increase his recovery and physical performance, he sleeps for 12 hours. When Kobe Bryant wants to improve his skill set, he shoots 800 times. When Peyton Manning wants to see holes in the defense, he puts in thousands of hours in the film room.

Sure, these athletes are blessed with one-in-a-million genetics, but chalking their success up to innate talent ignores a very big piece of the puzzle.

I’m willing to bet that their tireless approaches to mastering the fundamentals and unwavering commitment to consistency would pay dividends for nearly anyone in any field, regardless of genetic talent.

The Secret To Selective Attention

That said, Peyton Manning does have one distinct advantage over most people looking to develop expertise: statistics.

Why is this important? Because he has proof of whether or not he is making progress in his life and work. Because he is measuring these numbers, he is also looking to improve these numbers.

And when he does something new and the numbers go up, that is a clear signal to him that this new behavior is working.

The only way to figure out what works and what doesn’t is to measure your results. If you repeat this cycle for 20 years, you end up becoming very good at focusing on the things that matter and ignoring the things that don’t.

If you want to get better, then practice consistently and measure constantly. Use that feedback to figure out what is working and what isn’t. Then, spend your time putting in more reps rather than searching for another hack.

Experts spend more time focusing on what works. And, the only way to know what works is to put the time in.