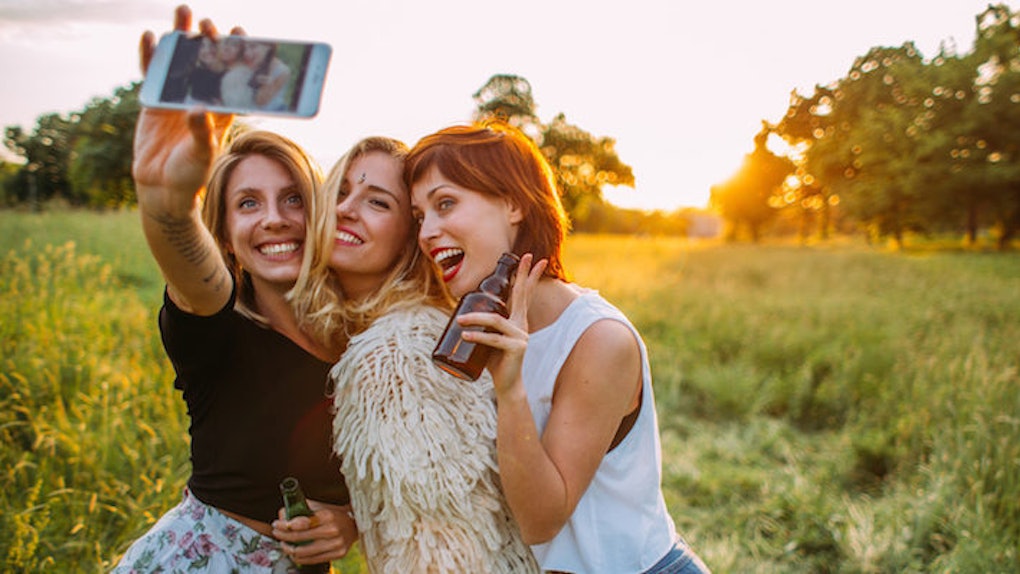 Like any 20-something, I enjoy drinking. I love an ice cold beer at the dive bar or a strong cocktail after a long, stressful day (even though I know that, scientifically, alcohol does nothing to actually quell anxiety).

As much as I like alcohol, I also know that it makes me do really stupid sh*t. It makes me lose things, say things I don't necessarily mean -- and, perhaps most embarrassingly, blast ridiculous social media posts all over the Internet.

In the throes of an alcohol-induced emotional bender, or even just because Drunk Me had a thought and needed the world to know it, no matter how banal or irrelevant it was, I've found myself making brooding tweets that I thought had meaning, Facebook statuses that I thought were the perfect levels of passive aggressive, and Instagram uploads that I somehow thought were funny.

This, for example, is a drunk tweet I posted after having spent a night at a bar in New Jersey. Some bros were talking to me and my friends about a hashtag campaign they were doing called #SaveMeg. I don't remember what it was for, but I tweeted it to show my support, I guess.

This isn't even the worst of it, I'm sure, since most of my other drunk social media posts get deleted the morning after, when I realize that any insightful Facebook statuses I posted were more hackneyed (and probably more misspelled) than they were insightful.

I know I'm not alone. I've received Facebook notifications at 3 am, and I've seen incoherent tweets on my timeline, indicating to me that someone, somewhere, had a terrible night that only social media can fix.

Luckily for us, a few of those people were brave enough to show me some of those posts, so here are 10 people on their worst moments combining alcohol and social media.

1. I hope the seagull at least said thank you.

I'm a polite person, and I don't think alcohol changes that (most times). It would absolutely be my instinct to hold the door open for anyone -- or anything. It's also my instinct to prove my chivalry/stupidity to the world. Also it was just f*cking hilarious.

I remember when I tweeted it, I was walking alone down the street looking for Rocket Joe's. And it was important enough to tweet as I drunkenly roamed. I'm pretty sure I called them too just to make sure.

I found a dog butt and a piece of talc. I don't remember why I posted the talc.

4. This is an accurate observation.

I really have no idea the genesis of this, but it's by far my most out-there tweet.

This is from my brother. Instagrammed it, didn't remember it. He was fighting with his roommates over how he puts more cream cheese on his bagels than most people, and he wanted to show other people that he likes a lot of cream cheese.

I don't know what this is, but I was drunk

Cont. BAE redeems himself after not sending me the dick pic I requested: pic.twitter.com/s0GiC39IFH — GigiEngle (@GigiEngle) July 13, 2015

This describes that pivotal moment in the night where the choice needs to be made to go home and binge eat or keep raging on, and clearly I was not willing to sacrifice a pint of Ben & Jerry's for a couple of extra hours in "da club."

So I was drunk scrolling through Instagram when I noticed my friend posted a cute picture with her boyfriend. I click on her profile to check it out, comment on the picture and continue to scroll through. At some point during this process I forgot that I was scrolling through her profile, not my own feed, and was ALARMED by the number of Instagrams she was posting to blow up my news feed like this.

--Candice (her comments are outlined in red)

9. Just incase she dies, someone will find her.

I was tired of relying on other people to fill in the blanks of my drunk night-outs, so I started checking into all the places I visited on my pub crawls so the Internet could help me piece together my life the next hungover morning. And plus, when I inevitably lost everything in my pockets, I had a very clear treasure map back to my belongings.

I was at the Boston Comedy Festival, and Boston has so many Indian restaurants.

An Indian restaurant called "Curry The F*ck Up." — The Levine Machine (@Eitanthegoalie) September 13, 2015