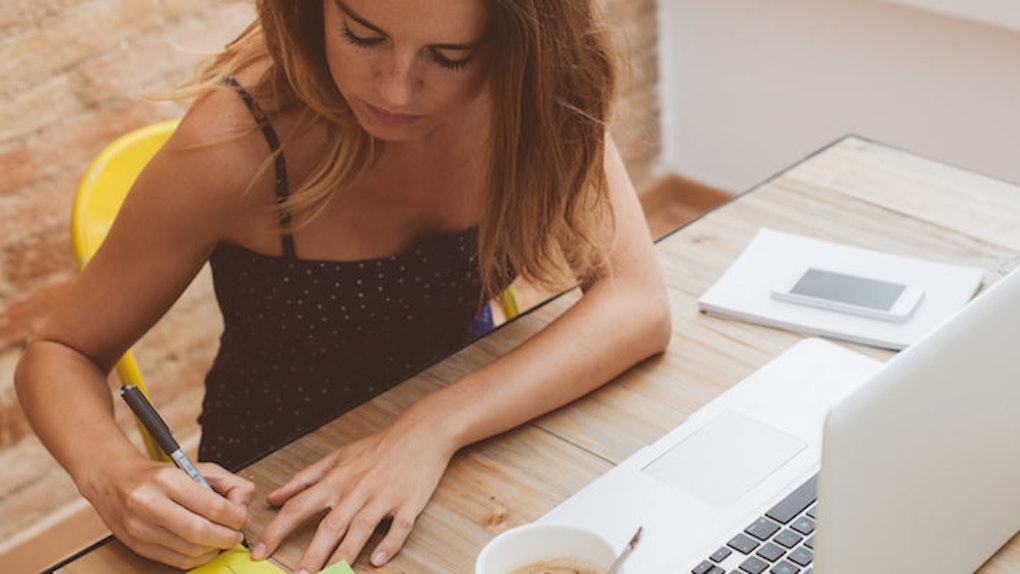 Look, ladies: We have an assertiveness problem. Whether it's never telling the guy we're hooking up with that we want to be exclusive, our inability to politely request the manspreader on the subway remove his knees from our personal space or failing to let a friend know her kale salad is parked all up in her teeth, our gender backs away from hard conversations all the time.

Here's the thing: You'll get off the subway soon, the manspreader will be in the past and you won't need to live with the consequences of not telling him to GTFO for more than 10 minutes. But in the workplace, where some of the toughest conversations need to take place, it's time for women to say enough is enough with the laissez-faire attitude about our futures.

Fun fact: Dudes are already doing everything on this list, and they're succeeding because of it. So buckle up, put on your big girl panties and remind your mom she didn't burn her bra on the quad for nothing.

A recent study found that 57 percent of male Carnegie Mellon business school graduates negotiated their starting salaries at their jobs. Female CMU business grads — the ones with the exact same skills and education — were much more hesitant to do so, with only 7 percent negotiating for a higher wage.

Various reports show the average dollar amount left on the table over your career when you fail to negotiate your salary is somewhere between $1 and $2 million. That money could go toward a lot of Birkin bags, Teslas, Jimmy Choos or as I like to think of it, enough money to pay off my student loans 20 times over.

So, why aren't we doing it? The answer actually has less to do with the asking itself and more to do with the backlash we receive when we do it. When women negotiate, we're seen as aggressive, cold or just straight-up bitches to men.

In turn, men become really uncomfortable and react poorly. When that happens, we clam up and back down, probably because the world has been telling us to be demure and non-combative since forever.

But remember: The job offer is already on the table. You're the best candidate for the position. Enough people already think you're friendly, dynamic, a team player and all the other buzzwords, and your skills have already qualified you for the job.

So, who cares if you come off a little icy when you ask for the salary you deserve? If your employer is a latent sexist, that's not really your fault now, is it?

Nobody is good at everything. We all have our skills and our shortcomings, and working as part of a team means there's probably someone else around who can help us in the areas where we're less capable.

Women, however, tend to internalize our problems. If we're struggling with something or are too busy to get to a task, we keep it to ourselves and soldier on, ultimately leading to unnecessary frustration. We don't want to seem weak or incompetent, and as a result, we make ourselves look worse by failing to meet deadlines and producing sub-par work.

So, use your phone-a-friend option, guys. When was the last time some dude asked if you could do something for him, even if it was just making more coffee in the break room? It was probably recent, and you probably did it for him.

There's nothing wrong with helping someone out as long as you're cashing in on the return favors. So, pop your head over that cubicle wall and ask Jim if he has a second to grab you a soda. How refreshing.

3. Tell people how awesome you are.

You, my friend, are a bad bitch. Whatever your accomplishments, no matter how small they might seem to be, it's important to make sure the world knows how great you are.

You know how you post photos of yourself having a really great time on Instagram with a bitchin' filter and #FridayVibes? You're broadcasting to your social circle that you have an active social life, people like you and you're pretty.

So, if you can tell the 200 random people you knew in high school how wonderful your personal life is, why do you find it so hard to tell your co-workers and superiors when you've done something great at work? Bravado doesn't come as naturally to women, but it's an easy hurdle to get over.

Next time you have some great sales numbers come in or a PR piece you wrote gets picked up somewhere big, post the hell out of it on your company message board and mention it to your boss next time you awkwardly run into each other at the coffee machine. Because what's the point of accomplishing anything if you're not getting a gold star, amirite?

“I was thinking that, maybe, if it wouldn't be too much of a problem, and if you guys were on board with it, we could possibly try…” Yeah, you've started a sentence that way. I'm not judging you for it; I totally have, too. But have you ever heard a man talk like that?

Chances are, probably not. Men do this fun thing where they just say what they think or want. It sounds revolutionary, but it's actually a great way to make people trust and listen to you more.

When you're scheduling a meeting, enough with “Does 4 pm work for you? If not, I can totally shuffle some things around. Also, if I need to not go to the opening of my best friend's show, that's totally fine. She'll definitely forgive me.”

Being direct lends you a sense of authority, and not being too flexible lets others know you're decisive and experienced. Plus, people are way more likely to agree with whatever you say, and that's a win-win in my book.