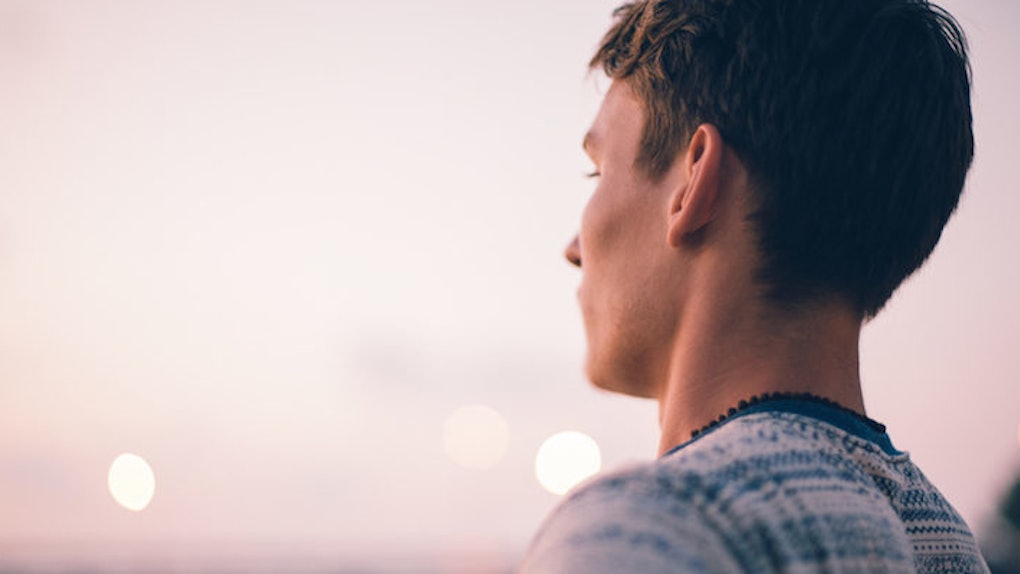 I’ve been “out” for going on nine years or so.

I work part time at a gay bar in Hell’s Kitchen, NYC, wearing a crop top for tips.

It doesn’t get any gayer than that.

Yet, I can vividly remember every heartbreaking, terrifying and downright depressing emotion I ever felt when I was closeted.

I was a late bloomer, I’d say.

I didn’t really start feeling anything sexual until I was, like, 15 years old.

When I did, though, it hit me like a ton of bricks.

It was the show "Queer as Folk" on Showtime that really started making me question things.

I would sneak off and watch it every chance I got.

The whole show, I would sit there and just feel things I had never felt before in my life.

Some were good feelings, and some were bad feelings.

The bad feelings I felt were mostly those of shame.

I was ashamed of being gay.

I was embarrassed that I was feeling something completely different than everybody else.

I didn’t want to let my family down.

Every mother has a dream for her child, especially for her son.

She wants her son to have the wife, two kids and the white picket fence.

I was ashamed because I believed I would never be able to give my mom that.

I would have to let her down.

I went to high school in a small town in Alabama.

My graduating class only had 19 people in it.

It was a very small town with small-town ways.

I used to show up to school every morning at 7:05 a.m, way before any other kids or teachers started arriving.

I did so because I was afraid I would be ridiculed or called a “fag” in the hallways.

But the crazy thing was, I was a pretty popular kid in high school.

Yet, fear really kept me from making the most out of my high school experience.

I told my friends and family it was because I wanted to become an actor.

The truth is, I wanted to act like myself and be who I really was.

One of my most embarrassing moments in LA was when I went to this 18 and over club and picked up a beautiful girl from Barbados.

I even tried dating her for a week, but I made various excuses as to why I wouldn't have sex with her.

Being 19, I wasn’t able to go to gay bars yet, and I couldn't explore the gay lifestyle.

So, I went to West Hollywood almost every day.

I grabbed a coffee, walked around and simply just tried to fit in.

Walking up and down Santa Monica Boulevard were some of the scariest, yet most liberating moments of my life.

It wasn’t until two years later that I came out to my mom, my family and the rest of the world.

Life wasn’t easy when I was closeted.

Hell, at times, it was downright hard.

I could have used a little pep talk from someone or a few choice words to let me know it was going to be OK.

Here’s the short, sweet and simple letter I would write to my closeted myself:

Dearest Donny, You're an extraordinary young man. You're beautiful both on the inside and the outside. Do me a favor, kid. Walk with your head a little higher. There’s nothing to be ashamed or afraid of. The feelings you have are normal, and you are normal. The road’s going to be a little rocky, but you’re going to come out on the other side. You’re going to not only succeed, but you’re going to thrive. Your family loves you for who you are, and they will accept whatever you throw at them. What will make everyone around you happy is seeing that you yourself are happy. Walk with a little more confidence because you’re a leader, and you will have a lot of followers. Last, but certainly not least, when that friend of yours approaches you in the gym that day with a proposition, please, don’t say no. Lots of love, Donny

It sounds weird, but those few little words could have changed a lot for me growing up.

It’s hard to think that there are thousands of young boys and girls all around the world struggling with the same feelings I had as a closeted teen.

If you’re one of them reading this, take those words to heart, and know that the old clichéd line, “It gets better,” is so true.