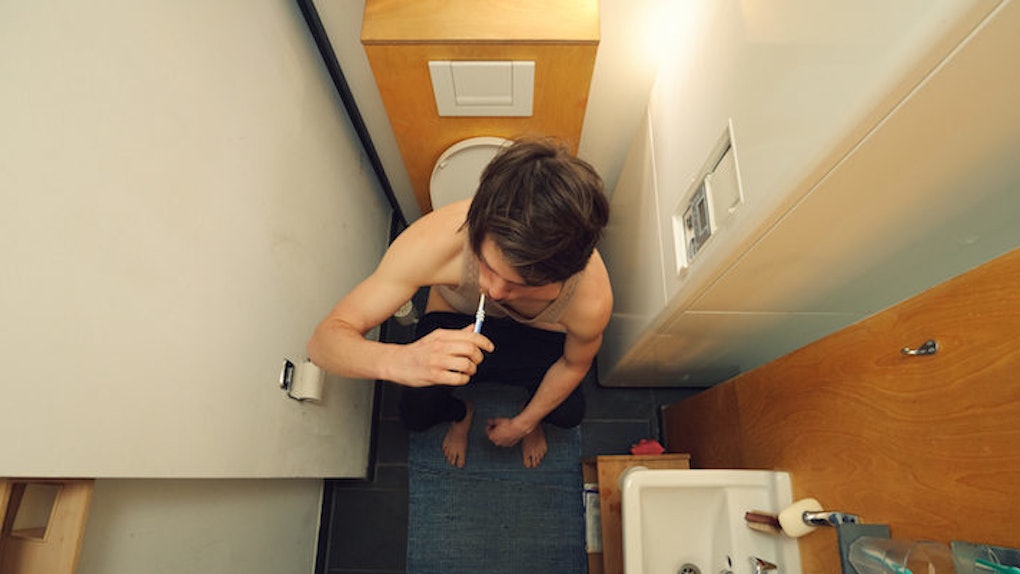 Why Do Men Love Pooping So Much?

Throughout my life, I've noticed that the pooping experience for men is vastly different than it is for women.

It's not uncommon for the men I know to revel in the process of taking a massive sh*t. For men, pooping is a soothing, relaxing time when they lock themselves in the bathroom for upwards of half an hour, engage with a variety of reading materials and simply chill the hell out.

Pooping is not just a time to physically relieve themselves -- it's a daily requirement without which they'd be emotionally and spiritually stunted.

This is not the case for women. First of all, women will do their DAMNDEST to not poop in the first place, especially if we're with other people. But if we really have to, we just want to get in and get out. And when we're done and we emerge from the bathroom, we won't breathe a dramatic sigh of relief or joke about how you'd "better not go in there, haha!" No. We'll just hope you didn't notice how long we'd been gone.

What accounts for these stark gender differences in poop enjoyment? I needed to understand why men seem to love pooping so much more than women. So I decided to investigate.

Connor Toole, humor writer at Elite Daily, started me off with an interesting theory.

In a way, this makes sense. A man will never experience the magic of pushing a child out of their genitals, so I suppose the next best thing is pushing a turd out of their ass. Kids can be serious pieces of sh*t anyway.

But this didn't feel like enough. There had to be some other explanation.

When I asked my boyfriend why men love pooping, he told me that it "just f*ckin' feels good." This concept, though perhaps not quite as insightful as Connor's, seemed more legitimate, even though pooping feels good for everyone. A release of tension will feel great in any capacity.

Yet as I delved more into the idea of pooping feeling good for men specifically, I found out that pooping can stimulate a dude's assh*le in a way that women don't have the luxury of experiencing. And it's all because of the prostate.

The prostate is a walnut-sized gland located at the base of the penis. It's basically like the male G-spot. You can't touch it directly, but you can stimulate it by putting pressure on it via the anus.

One user on Reddit asked if pooping feels better for men because they have a prostate that gets stimulated when they sh*t. Lots of men weren't sure, since they've "only ever pooped as a guy," but this one response piqued my interest:

Comment from discussion Does pooping feel better for men because they have a prostate?.

Another male user confirmed this perspective, claiming that he feels a "slight, sexual twinge" after pooping. However, he claims he doesn't particularly enjoy that feeling. It's just a thing he notices.

Comment from discussion Does pooping feel better for men because they have a prostate?.

Pooping is not a sexual experience for women. Beside the obvious fact that women don't have prostates, we are twice as likely as men to have gastrointestinal problems, which means we're more likely to suffer from conditions that make pooping a less pleasurable experience. To women, pooping is the opposite of sexy.

There's also the fact that men tend to feel more comfortable than women discussing poop because they don't have to worry about being LADY LIKE (*eye roll*). Guys have this uncanny ability to talk about the steamy dump they took this morning and still attract me to them. (Masculine gender roles, amirite?)

But anyway, perhaps I'm just perceiving this ease with which men discuss their sh*ts as a declaration of enjoyment. Perhaps pooping is as nonchalant of a topic of conversation for guys as the weather or sports, and I should simply accept it as such.

For whatever the reason, if you ask a male friend how he feels about pooping, I guarantee his answer will lean towards the positive. And frankly, I'm jealous. I wish I could bask in the simple pleasure of taking a sh*t without all the added anxieties it causes me.

Then again -- and my femininity is about to take a huge hit for this one, so whoops in advance -- I'm definitely known to have clogged a toilet or two and felt proud of my accomplishment. Just call me one of the guys, I guess.