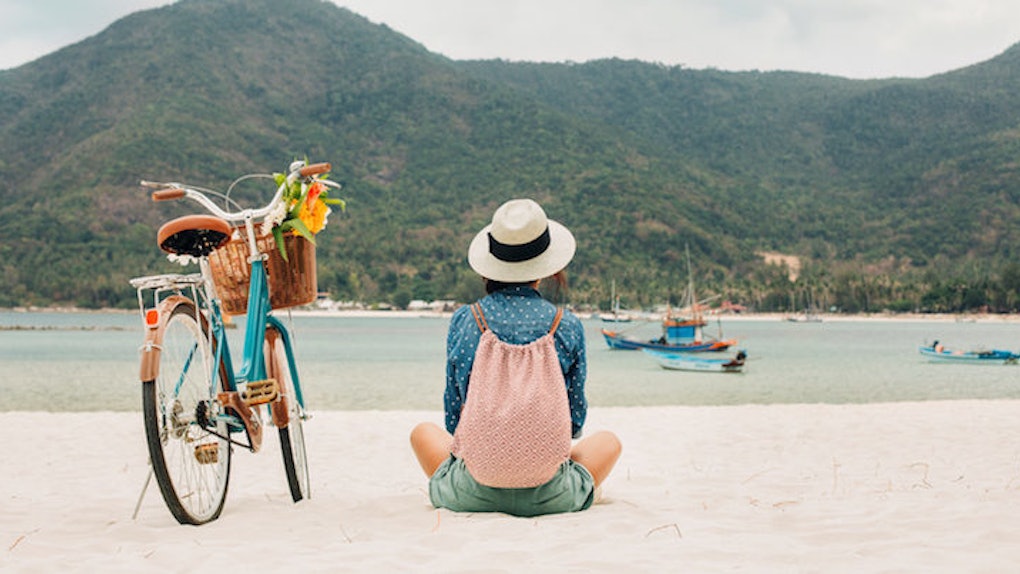 I've recently been bitten by the wanderlust bug. It never occurred to me that wanderlust could be this intense and visceral, but here it is, rocking me to my very core and making me Google "flights from New York to California" at least once a week.

I just graduated college, so I have lots of friends who are spending their post-grad days backpacking across Southeast Asia, taking road trips to Seattle or flying out to Europe.

They don't have jobs yet, but they're filling their time by somehow having enough money to explore the country and the world. And for that I am incredibly jealous.

While I'm lucky enough to have a wonderfully fulfilling job immediately after having graduated, there's a part of me that feels empty because I can't travel.

I can't just drop everything and go, travel the world, do whatever I want -- and it's because of this that my wanderlust is the biggest pain in the ass ever.

Here's how you know yours is, too.

You are broke as f*ck.

All of that advice everyone likes to give about dropping everything and traveling without worrying about money is BULLSH*T.

You HAVE to worry about money when you travel. That is a FACT. Anyone who implies that I don't have to worry about it just angers me because of how unrealistic they are and how uptight they make me seem in comparison.

I can barely afford to eat in my own city, so what makes you think I can afford to explore my wanderlust as whimsically and spontaneously as you suggest?

If I want to travel, I have to plan a whole entire budget for that sh*t, and even then I probably still wouldn't be able to accumulate enough. The struggle is far too real.

You're not present because you're always thinking about where you could be.

When I walk through the streets of Manhattan, I can't help but imagine what it would be like if I were in San Francisco instead.

Recently, I can't even count the number of times I've fantasized about saying f*ck it, booking a plane ticket and going on a weekend adventure up the West Coast.

I'm dying to see Los Angeles, Portland and Seattle -- to experience their bluer skies, their taller mountains and their more relaxed lifestyle.

That's the thing about wanderlust. It makes you think that everywhere is better than where you currently are.

You try to satisfy your wanderlust within your own city and fail.

If I'm feeling particularly wanderlust-y one day, I might (lamely) order Thai food or take a walk somewhere that doesn't resemble any other part of the city.

I'll try to immerse myself in a totally different environment within my current one -- but it won't work.

Sure, the Thai food will be delicious and exotic, and the walk will be refreshing and different. But it just won't satisfy the wanderlust.

Social media is to people afflicted with wanderlust as a bakery is to someone with Celiac disease: You want everything, but you can’t have anything.

Whenever anyone shares artsy pictures of their wild adventures on Facebook and Instagram, envious rage bubbles in the pit of my stomach and I need to look away immediately. I know it's all in good sharing fun (well, kind of), but f*ck does it make me jealous.

You have an instant dating deal breaker.

Dating becomes instantly harder when you're afflicted with wanderlust. Any man I come in contact with who doesn't have an itch to travel is not someone I want to date.

It almost doesn't matter how great he is otherwise -- if he's complacent with never leaving the confines of his environment, I want nothing to do with him. He'd prevent me from living my truth, and I can't handle that.

You're particularly attracted to foreign people, all of whom think Americans are nuts.

When I studied abroad in Madrid during my junior year of college, I quickly befriended a diverse group of foreigners, forgoing a lot of my friends from school who I'd traveled with.

I felt a special connection to my new Dutch, French, Spanish and Korean friends, and I yearned to learn everything about them, to soak in their accents and their cultures.

Despite diving into my new foreign friendships, I was easily dismissed as a "silly American" anytime I did something slightly ridiculous.

My accent, my personality and the very core of my identity were all so abrasive compared to all the chic Europeans, and I could tell they probably thought I was insane a lot of the time.

In fact, this Dutch guy I hooked up with said he wasn't looking to date anyone while studying abroad, but then two weeks later, he started dating a Spaniard.

And I'm more than positive that this happened because I was an American and she was not.

You have outfits exclusively for your hypothetical trip that you'll never wear.

You know that flowy skirt you have hiding in your closet? That's your “Greece skirt.” It'll look great on you as you explore the island of Santorini one day.

It'll flow in the wind, catch the sunlight perfectly and attract everyone to your whimsical spirit, and you'll wear it with gold bangles and turquoise rings.

But, no, you can't wear it now. It just won't look the same if you wear it in your boring town, to that boring bar you frequent or to the boring grocery store. So you never wear it. You just spend time fantasizing about it instead.

You're too practical to travel alone.

Besides my friends who are currently traveling, nobody else feels similarly about wanting to explore the world -- everyone is either pursuing their masters or PhDs, in the midst of their new jobs and don't want to take vacation days yet or just don't care about traveling at all.

And yeah, sure, I could travel alone, but I'm too practical for that sh*t. I know that traveling would be significantly cheaper, significantly safer and significantly more fun to go with someone who I enjoy spending time with -- like maybe my best friend, who is currently getting her master's degree in accounting and has no money or time to travel, or a boyfriend, one of whom I don't have.