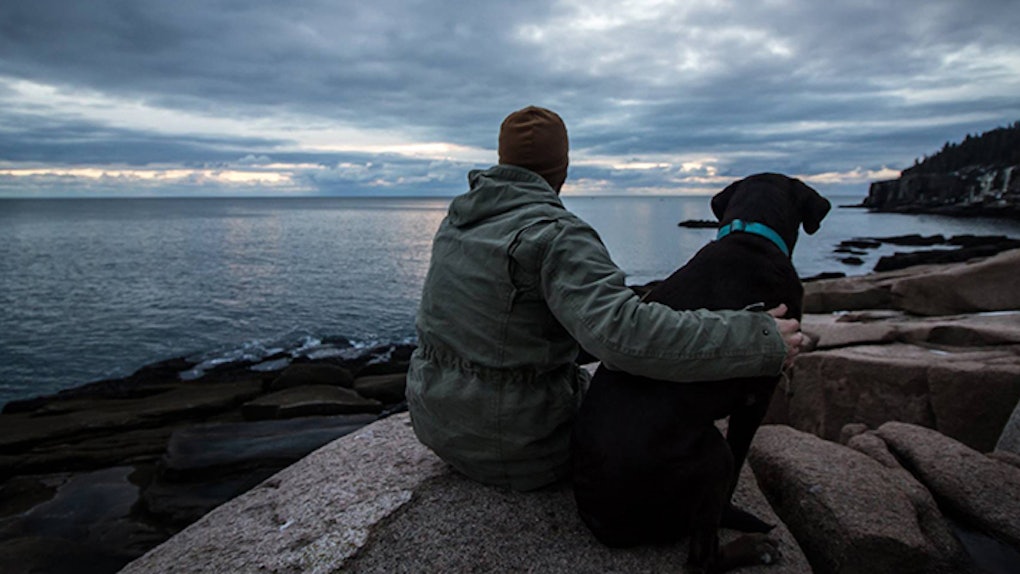 “Bella is the strongest connection I have ever had with another living being, and I don't care that she's a dog,” Rob Kugler told me as he was getting ready to sleep in his SUV in a rural parking lot with his terminally-ill dog.

Rob has been on a 14-month epic cross-country journey with Bella. She was diagnosed with osteosarcoma (bone cancer) in May 2015.

The vet told Rob she was going to die very soon if they didn't amputate her front left leg. After giving it some thought, Rob decided to proceed with the surgery.

He was then told Bella had another three to six months to live.

Rob, 33, was born and raised in Nebraska. He is extremely outgoing, talkative, animated and has a great sense of humor.

He is a retired marine and was going to school in Nebraska during the time of Bella's diagnosis.

The decision to embark on the journey came gradually. "I didn't want to come home one day and have her be gone." Rob said.

I didn't want to come home one day and have her be gone.

He also added, "The best thing you can do for anyone is be there for them, and letting them know someone cares about them."

Shortly after Bella's surgery, Rob was visiting a friend in Chicago and decided to pack a few extra things just in case.

After that, he spontaneously decided to keep going and continue documenting his trip on Instagram and Facebook Live.

Eventually, he made the decision to terminate his lease, pack the rest of his belongings in storage and leave everything else behind as he and Bella set out into the unknown.

An artist and former actor, Rob writes about his new experiences with Bella every day, often coupling his breathtaking photography with a contemplative caption.

Soon enough Rob's Instagram account skyrocketed past 100,000 followers and continues to get massive support and engagement. “I never could have fathomed how many people would be affected by our story,” Rob said.

The journey began attracting the attention of local news and websites, all of which barely scratched the surface of the meaning behind this trip.

Rob said, “It was always the same superficial story... 'Hey, look at the man and his dog, how cute.' But it's more than that!”

The more time I spent with Rob and Bella driving up and down the east coast, I, too, began to realize the heavy meaning of this trip.

Rob would talk about his past depression, his recent divorce, PTSD and suicidal ideation.

Rob lost a brother in the Iraq War and is very active among war veteran communities. He wants this journey to inspire people to live in the moment and recognize how precious and wonderful being alive is.

And Bella is the one who demonstrates this to him more than anybody.

A lot of people envy Rob because they see a guy with no obligationst living the ultimate definition of freedom. Every day is a new adventure.

However the journey hasn't been all sunshine and rainbows. Rob lives modestly. He subsists off protein bars, nuts and a cooler of water. He sleeps in his SUV often, bathes with baby wipes and uses a lot of Gold Bond body powder.

After being in the military for 10 years, Rob has made a lot of friends across the country. He knows someone is almost every state, so every once in a while, people have been kind enough to let Rob and Bella stay with them as well.

Rob does have some doubts, however; in his introspective moments he says, “Sometimes I think I could use some structure in my life. I ask myself, 'Is this good for me?'"

Rob is single and doesn't have a solid career path at the moment, but truly feels this chapter in his life is leading him to a new purpose.

As for Bella's condition, they're taking it day by day. She has outlived her initial diagnosis by eight months and the vets are astonished. They believe this trip must be keeping her alive.

Rob's followers want him and Bella to keep going and keep inspiring.

Rob is a pure motivator and someone who inspires. You simply cannot quantify the amount of positivity and joy he and Bella have been giving to people all across the world.

Just witnessing the love and support they have galvanized proves there is still a lot of good left in the world.