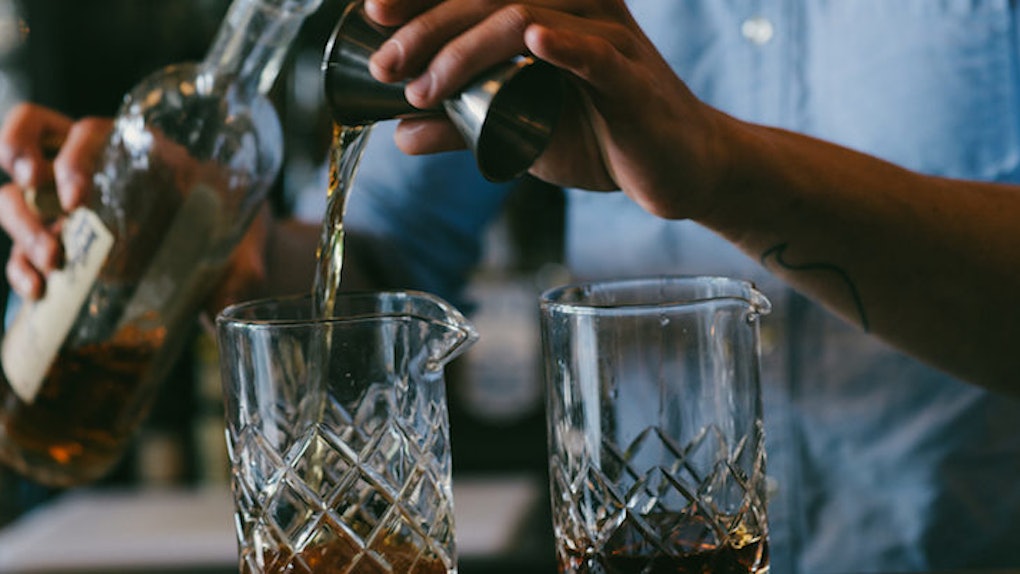 You are in love — the type of long-term love that you've always dreamed about. You're seeing a future together. You're committed.

But eventually, you get that itch. You want a fling! You want to freshen things up! Let's face it: You want to cheat.

Your signature cocktail has been by your side season after season. It's been in your hand through some pretty awful dates, and toasted other glasses when you got a promotion.

Yet the problem is always the same: You inevitably get restless and want to try something new. You want to take advantage of the time of year and have something seasonal. You want to imbibe the type of drink that will make you exclaim “Ahhhh” after your first sip.

It's not that you want to break up with your signature drink. It's just that unique cocktails like the eight we found below will make you wish you had an open relationship.

1. If you like Whiskey Gingers, try this twist on the classic.

The first time I tried a whiskey mixed with ginger ale, I knew it would be my go-to cocktail. I started ordering it every time I was in a bar, stoked that I had finally found my signature drink. That being said, it is a drink that gives off the vibe of “down and dirty.” It isn't appropriate for every occasion.

So when I'm looking to appear a little more upscale and mysterious, I upgrade to a whiskey and ginger beer. Start with dark rum and mix in ginger beer and lime juice in a tall glass, stir and enjoy.

2. If you like Vodka Cranberries, try a Cran-Apple Soda.

Vodka Cranberries are the perfect go-to when you aren't in an adventurous mood. But when you're chilling on a rooftop and it's beautiful weather, who wants to resort to a backup cocktail? You want something that's both easy to make and more tasty and fancy than that vodka cran.

To kick the Instagram-worthiness up a notch, add fresh cranberries and apples. It's a great way to blend the best parts of summer into one glass.

3. If you like Margaritas, try a Pineapple Chi Chi.

Nothing sounds better in the summer than grabbing tacos and making a blender of Margs. Well, nothing except substituting those Margaritas for something light and tropical like the Pineapple Chi Chi.

First off, let's acknowledge that just saying Pineapple Chi Chi is amazing. Now that we've done that, let's figure out how to make it. The great thing about the Pineapple Chi Chi is that it still has a nice dose of lime juice, just mixed with equal parts pineapple juice and gluten-free Smirnoff Sourced Pineapple Vodka. Simply add mint and top it off with a slice of fresh pineapple, and you'll soon forget about that Margarita all together.

4. If you like a Vodka Sodas, try a Ruby Red Grapefruit Soda.

The Vodka Soda is a cocktail staple, but sometimes you need to mix it up. When that time comes, replace standard vodka with Smirnoff Sourced Ruby Red Grapefruit and pour in a grapefruit-flavored seltzer water. Add some fresh lemon juice and you'll have a gluten-free drink that is guaranteed to hit the spot.

Martinis are always a good choice when you're looking to class it up. But when you want something classy AND fresh, switch it up with a Gimlet.

Shake equal parts lime juice and rum, and garnish the glass with a sprig of mint for that cool flavor.

6. If you like Gin and Tonics, try a Bramble.

Gin and tonic water are a natural pairing, but did you know that gin and blackberries are as well? They are all combined to perfection in a drink called the Bramble.

It's made with gin, crème de mûre (a blackberry liqueur), lemon juice, sugar and fresh blackberries. The best part? It's guaranteed to impress your friends when you order this at your next squad hang.

7. If you like Red Sangria, try a White Sangria Sparkler.

Though classic Red Sangria is served over ice, you probably don't immediately think of red wine when you are searching for a light drink. But that doesn't mean you have to ditch the idea of Sangria all together — just make it a White Sangria Sparkler.

Mix one bottle of Sauvignon Blanc and one bottle of seltzer (flavored if you'd like), and add in tropical fruits like kiwi and mango to punch it up a bit.

8. If you like classic Mimosas, try a Grapefruit Mimosa.

If your brunch cocktail option tends to lean more citrus than tomato, you're probably more inclined to order a Mimosa than a Bloody Mary. But if you're looking to jazz it up, you can take that citrus to the next level by using ruby red grapefruit juice instead of orange juice.

To really add some zing, mix in a little Smirnoff Sourced Ruby Red Grapefruit (again, gluten-free). It's the perfect way to start your Sunday Funday.