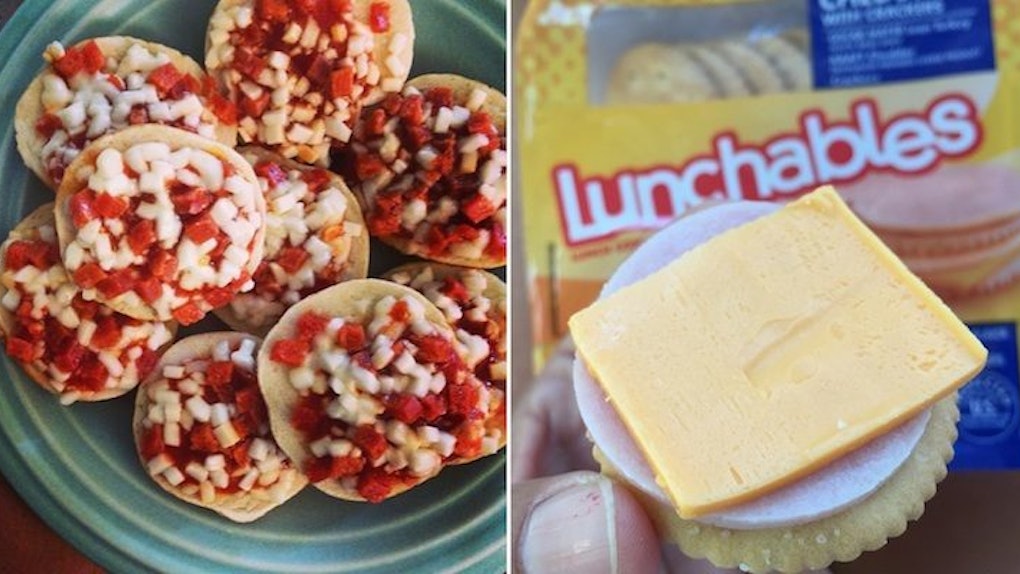 Childhood Ruined: Just How Unhealthy Was All The Food We Ate As Kids?

Every time I walk past a kid slurping on a pouch of organic, vegan, gluten-free, sustainable, locally-grown, cruelty-free vegetable puree, I thank my lucky stars I grew up during the glorious '90s.

Today's children will never know the joy of consuming all sorts of nutritionally useless garbage without a care in the world.

The '90s were a simpler time when "juice" was synonymous with artificially-dyed sugar water and colored cornstarch was molded into the shape of Scooby Doo characters and passed off as a respectable snack.

Really, it's no wonder so many of us were diagnosed with ADHD during our childhoods.

They just don't make snacks like they used to, but then again, that's probably for a good reason.

As most Millennials know, being a health nut wasn't as trendy as it is today, and the things our parents put in our lunch boxes prove they were either trying to kill us, or the whole healthy eating thing just wasn't a big concern back then.

We decided to take a trip down food memory lane and ruin your childhood by telling you what's actually in all those snacks you loved so much as a kid.

The fact that you can't pronounce half of the ingredients on the back of this box should probably clue you in on how this poor excuse for a meal is unhealthy AF.

There are 16 grams of fat, 580 grams of sodium and 17 grams of sugar in the ham and cheese pack, as well as lots of preservatives and artificial food additives.

The pizza Lunchables, aka cardboard disks topped with liquid tomato-sugar and fake cheese, aren't any better.

One 16-ounce can of this radioactive-green-colored soft drink contains 230 calories and, brace yourself, 56 grams of sugar!

If chugging carbonated sugar water isn't enough to give you a serious "surge" of energy, don't worry, this drink also has caffeine in it. Seriously, it's pretty much a heart attack in a can.

With 120 calories, 1.5 grams of fat and 12 grams of sugar for each 3/4 cup serving, this cereal should have been classified as a balanced part of your dessert rather than breakfast.

Plus, you know you ate more than one serving and you probably filled that sh*t up to the brim with whole milk to boot.

With all of that salt, it's no wonder this stuff made you bloat into the shape of an "O" yourself.

A 4-ounce container of this yogurt contains 120 calories, along with 20 grams of sugar and a measly 5 grams of protein.

Sugar is actually the second ingredient listed in these things, followed by fructose syrup (which is basically liquid sugar) and corn syrup (again, more sugar).

Let's face it, the best way to eat anything remotely healthy is to dye it fun colors and smother it in sprinkles, right?

It's probably a good thing your beloved Ecto-Cooler Hi-C was sent to the grocery store graveyard, because each little 8-ounce box was basically 120 calories worth of water sweetened with 31 grams of sugar, artificial flavors and a splash of juice concentrate.

This "juice" drink wasn't much better than its Hi-C competitor.

It had fewer calories (probably because it was only 6.75 ounces) and was basically a liquid carb concoction that contained 100 calories of colored water mixed with 6 teaspoons of sugar and lots of artificial crap.

Gushers and Fruit By The Foot

Opening your lunch bag and finding either of these treats was like hitting the jackpot as a kid.

It shouldn't come as a surprise that little cookies covered in frosting are pretty terrible for you.

Each 1-ounce pack is loaded with enriched flour and corn syrup and contains 120 calories, 4.5 grams of fat and 13 grams of sugar. No wonder this sh*t had you bouncing off the walls like the Aussie kangaroo mascot.

A serving of four of these heavenly little bagels contains about 200 calories, 5 grams of fat and 32 grams of carbs, so they aren't exactly the healthiest thing in the world. But they're definitely better than eating one of those horrendous pizza Lunchables.

You were usually one of the lucky kids if your parents sent you to school with Cosmic Brownies in your Power Ranger lunch box.

But like most delicious treats, these things were pretty horrible for you, since one brownie had 280 calories, 11 grams of fat and 24 grams of sugar. But damn, did those things taste good.

I basically lived off of Pop-Tarts as a kid, so I was pretty horrified the first time I bothered to flip the box around and read the label.

A single pastry has 200 calories, along with 5 grams of fat and 17 grams of sugar.

Plus, no one in his or her right mind ever eats just one Pop-Tart at a time, so you can double that to a whopping 400 calories.

This breakfast cereal contained approximately 112 calories, 2.4 grams of fat, 21.5 grams carbs and 11.5 grams of sugar for every 3/4 cup (and let's be real, you weren't making it through a Saturday morning episode of "Ninja Turtles" unless you had at least twice that amount).

So you can double those numbers off the bat, then add on all the calories and fat from the whole milk you drench them in.

Real meals? With 430 calories, 18 grams of fat, 500 milligrams of sodium and 54 grams of carbs, they probably should have written "real-ly bad for you meals" on the label instead.

These gummy sea critters had 90 calories in each pouch and were loaded up with 13 grams of sugar. They're pretty much fruit juice concentrate and corn syrup that's mixed with dye and molded into little sharks.

In fact, these things should really be called sugar snacks instead of fruit snacks.

As a rule of thumb, you should probably assume any type of snack that's designed to explode in your mouth isn't going to be healthy.

These things were basically just packets of sugar, mixed with more sugar and artificial coloring. Yikes.