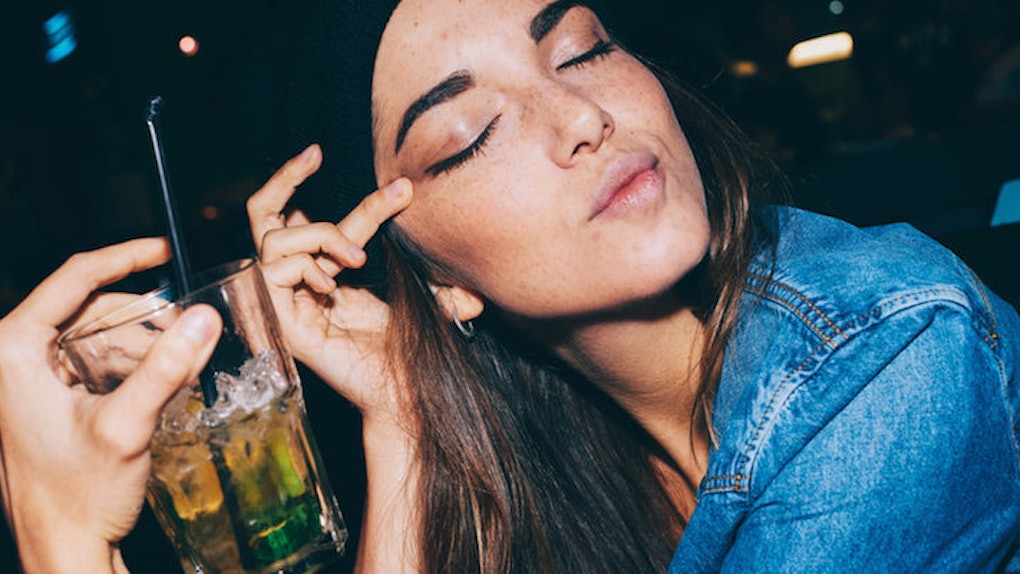 It was one of those deliciously beautiful, early fall, sultry September evenings. That two-week, quickly fleeting sweet spot that rests in between the suffocating humidity of a New York City summer and the bitter-cold pitfalls of an urban winter.

I was gazing into my reflection in my gold-gilded mega mirror, polishing my face with makeup whilst anticipating a fabulous night out in the Wild West Village.

As I expertly dusted the apples of my cheeks with a delicate smattering of shimmery peach blush and coated my lashes with just the right amount of black mascara, I found myself feeling unusually confident and self-assured about the pending evening.

Normally I'm one of those impossible, irritating girl creatures who becomes hot and sweaty, frustrated and defeated, temperamental and aggravated when getting ready.

I was overcome with a lovely sense of C-A-L-M this Wednesday evening. Maybe it was the way in which the leaves that peppered the streets of my quiet Upper East Side block were turning a brilliant golden yellow.

Maybe it was because I had just arisen from a peaceful two-hour nap, and I felt gloriously fresh and marvelously well rested.

My eyes felt like they were sparkling with an energetic glow. They do say you look as good as you feel, after all.

And I felt nothing short of f*cking awesome.

I threw on a pretty, pastel-pink, floor-dusting maxi dress and a fashionably distressed white denim jacket before embarking down the stairs of my six-story walkup.

Not even the five-inch mega platform boots strapped to my feet were enough to keep me from floating with the grace of a prima ballerina down the narrow, hollow stairwell (okay, maybe I'm exaggerating a tiny bit, but you get the idea).

I was meeting my dear friend Cara for a fall friendship cocktail. I met her on the corner of West Seventh and Bleeker, and before I knew it, we were sitting pretty in an adorable downtown courtyard bar, basking in the Southern California-esque 73 degree, humid-less weather.

The courtyard was an electric blue sea with the most exquisite array of attractive New Yorkers my keen eyes had ever had the utmost honor of bearing witness too.

The crowd was as gorgeously eclectic as it was stylishly fierce: buff gay men with muscles seemingly carved from marble, ethereal runway models with endless legs up to their ears, boyishly handsome post-college grads sporting tasteful yet sweetly crumpled button-downs and downtown fashion mavens clad in charcoal harem pants.

Cara and I spoke excitedly about our plans for the upcoming winter. After a disappointing summer of cutting cynicism and irrepressible bitterness, we were two giddy, hyper-excitable girls on this salacious September night.

We were lit from within from the comforting thoughts of cooler weather, deeply humbled by the shift in seasons. A reminder that everything is always ever-changing, even when you feel stifled and stuck.

The night was off to a perfect start. Even the display of stars bedazzling the polluted city sky glowed illustriously.

The waitress finally arrived at our table seeking our cocktail order. She was a hard-looking woman, her hair up tightly in a no-nonsense bun. I silently wondered if she had a headache from all the bobby pins poking into her brain.

She was the kind of woman whose hands appear 10 years older than her face.

"I will have a glass of the house white wine," Cara proclaimed, providing the scowling waitress her most winning, sparkly white, heart-exploding smile.

The waitress stared at her with expressionless, unimpressed eyes.

"I will need to see some ID first," our sweet little waitress barked at Cara, with an unnecessary clip to her voice.

Cara batted her luscious, brow-bone grazing lashes and with doe-like eyes, pulled out her driver's license.

She's 32 years old, a good three years older than little ol' me. The waitress quizzically studied her license with the suspicion of a cop at the Mexican border.

"And I will have a vodka soda with two limes," I said, pulling out my driver's license. The waitress rolled her eyes.

"I don't need YOUR ID, honey," she croaked, emphasizing the "your." She clicked her steel-toed boots and stomped away with an attitude typically reserved for privileged teenage runaways.

I look notoriously young for my 29 years of existence, and CARA, who is three f*cking years older than me, is getting CARDED?

I was suddenly overcome with a slew of anxious thoughts that invaded the surface of my formerly blissful brain:

1. Who the f*ck does this bitch think she is?

2. Is it the fine lines underneath my eyes? Have they turned into crows feet?

3. No, I don't have a DAMN wrinkle on my DAMN face. That waitress was jealous of my youthfulness.

4. Jealousy really is an ugly trait. I feel sorry for the poor waitress. Life clearly hasn't been kind to her.

5. Wait a minute, I'm a REGULAR in the WEST VILLAGE. She knows me! That's why she didn't card me. I thought she looked familiar.

6. Except I've never been to this bar, ever.

9. Is it because I smoked cigarettes when I was a teenager?

10. Is it because I tried acid once in the tenth grade? Did that do permanent damage to my skin? OH GOD DRUGS REALLY ARE THAT BAD.

11. Or maybe the manager told her NOT to card me because I am, after all, a very important person, and it would be rude as F*CK to card someone as prominent as me. She was only being polite.

12. I'm sort of a celebrity. My apartment smells like rich mahogany -- people KNOW ME.

14. Maybe they're just not used to such sophisticated attire and connect my natural classiness with old age.

15. OR she probably assumed my ID was a fake and didn't want to have to kick me out of the bar.

16. That's it. She probably knew it was a fake ID and didn't want to have to kick me out because she's attracted to me and is waiting to ask me out. I did get a total lesbian vibe.

17. How awkward for her. I should give her my phone number just to make her feel better.

23. What the f*ck am I doing with my LIFE, going out in the middle of the workweek?

24. No wonder I'm not getting that promotion.

25. That's exactly why I look so old anyway, because I'm always drinking at bars in the middle of the f*cking workweek. WTF is wrong with me?

26. Look at Cara, she's not drinking her face off every night (unlike yours truly), which is why she looks under 21, and I look over 40.

27. I need to invest in Botox. I wonder if my best friend Owen would go in on a vial with me.

28. I don't need a WHOLE vial, just like a little bit of "preventative" Botox.

29. You know what, Cara probably has preventative Botox. That little bitch's forehead didn't even move.

30. Except I can't afford even half a vial of Botox because I'm always wasting my money on BOOZE.

32. And after the master cleanse, I will go back to this bar and get f*cking carded and show them who the f*ck is boss.