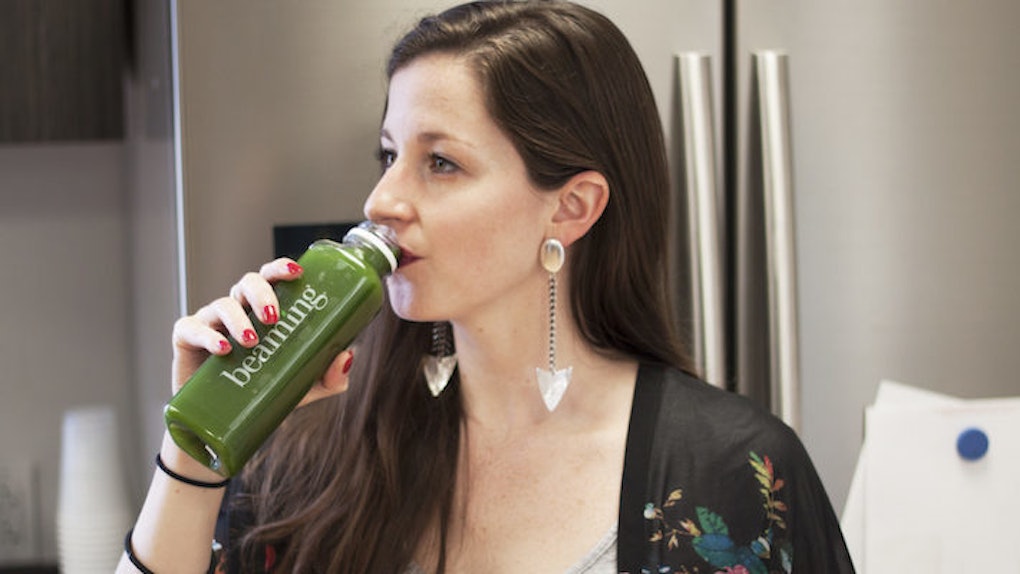 So, juicing is where you drink nothing but cold pressed, expensive AF vegetable and fruit juice for a few days in an attempt to undo/compensate for all the times you said "F*CK IT" and ordered the whole pizza for yourself. Sound familiar? Me too.

Juicing is the worst thing in the world. So when the chance to try the Beaming cleanse came along, I was like, "Y tho?"

I was seriously apprehensive AF. I once made my own tea cleanse and f*cked my life up. Seriously: It was a cautionary tale, kiddies. You don't want to spend the better part of two days peeing out of your ass like your Auntie Gigi.

But thankfully, this was no ordinary cleanse. This was a juice AND raw food cleanse.

That's right. This was a cleanse that included eating. Beaming says that it doesn't believe in starving the body of nutrients and calories (the way an ordinary juice cleanse does).

With the promise of a hotter bod and the hope of zero hunger-induced suicidal thoughts, I embarked on a three-day quest of 1,200 calories a day.

Day 1: The call to adventure

Here is what my day looked like, according to the Beaming chart.

They literally lay the whole thing out for you. For some, this is reassuring, but for me it was annoying. I have PTSD from this time I quit coffee and ended up dying of a caffeine headache, so I had to have a cup of coffee with raw almond milk before beginning the cleanse. I'm a diva when it comes to discomfort. So I f*cking hate this cleanse already.

Naturally, I had to inform Facebook of my juice-cleansing antics.

Also, no one on social media let me forget the infamous tea cleanse.

But still, I continued .... and WAIT. Juice one was delicious. And somehow also green. WHAT?

It was probably a combination of the coffee and the juice, but I was energized AF. But when I was on my way to work, my stomach started grumbling. It looked like juice was energizing but NOT filling.

When I am hungry, I am the worst person ever. I'd rather be burning to death in a desert than be hungry. So I decided to make this thought public by aggressively tweeting:

Nothing like a juice cleanse to remind you what an angry person you are — GigiEngle (@GigiEngle) April 7, 2016

I was counting down the seconds to my 10:30 am protein shake. But I was also simultaneously dreading it, because it looked like vomit. Luckily, it ended up tasting delicious. It was full of almond butter, strawberry and avocado. I am not gonna lie -- I almost didn't make it to this shake, but I'm glad I survived.

I was even kind of full. That's super unheard of.

The “soup” was up next. It was completely raw, so I couldn't heat it up. Looking at it, I thought I was going to hurl. It looked like sloppy, green baby poop.

But lo and behold, I was really into the soup, too. It's just zucchini, celery, olive oil and other healthy sh*t. I was really down with it.

Here's the thing about cleanses: They mean consuming an ass-load of liquids. I literally peed 178 times in one day. My fifth juice was essentially as close to grazing I ever hope to get. This conversation basically sums it up:

By 4 pm, I was starting to get hungry again. My theory was that the juices were pushing everything right through me.

At 5 pm, it was time for my last juice of the day, the ~Superfood Elixir~. It was SPICY! My insides were burning, but in a low-key, good way. It was like drinking liquid fire.

But the thought of consuming more juice after this was f*cking nauseating. Jesus, so much juice.

The salad I had for dinner was the bomb, but maybe that's because I couldn't eat until 8 pm because I was cycling underwater like a goddamn mermaid.

By the time I got home, I was ravenous. Managing to work out on a cleanse is some feat. Most of the time, you're so close to death that you can barely stand without blacking out on a juice cleanse.

A juice cleanse is definitely not the healthiest thing in the world. I don't think you're supposed to wonder if you will or will not pass out. My dad has always chastised me for giving into fads. But maybe a cleanse with food involved is healthier. IDK.

I was ready to start my second day strong.

I drank a ~Vitality Shot~, whose promises are probably bullsh*t. The ritzy names on these juices are good for PR, though. But it tasted spicy, so it gave me a jolt. It's lemon, ginger and turmeric.

OK, back to being positive. Beaming really changes up the taste of the juices, and the variety makes you not want to die with every sip.

Since I was working from home that day, I had my protein shake and hit the gym. I did 3.5 miles on the elliptical and still felt amazing. But then I had to go to Popeye's and watch my boyfriend eat fried chicken while I had a water. That was an ultimate test of strength.

Other than that hell, it hasn't really affected my mood too much. And I haven't been super cranky.

"You're pretty relaxed, I would say. I expected your energy levels to be lower," my boyfriend told me.

I know what you're all thinking: Auntie Gigi, I'm sad you were hungry, happy you could work out and tickled by your overall enthusiasm. But did you poop a lot!? The answer, my dear chickens, is YES! I was quite the regular lady! I think we all know how much I enjoy sh*tting. It was three times a day and feeling good all around. Goodbye, toxins!

By the end of the day, I was uncomfortably hungry, once again. I cheated. Well, kind of. I had a scoop of organic, raw almond butter after my salad.

No joke -- it was literally just a bowl of cabbage, and I was dying. But again, better than just ANOTHER juice on any other f*cked-up cleanse that's designed to ruin your life.

The third day arrived. The final day. The last day of my cleanse. Only ... I wasn't really miserable at all anymore. My body had FINALLY adjusted.

I drank all my juices, ate my soup, took my vitality shot AND THEN CLIMED a 4,180-foot mountain. Yeah, I did a two-hour, five-mile hike while on a juice cleanse. BOOM, B*TCH.

OK, so maybe this wasn't the best idea, but I like to live in extremes. And I lived to tell the tale.

I felt great. All of these amazing superfoods, elixirs and green juices really upped my energy and made me feel -- *gasp* -- pretty healthy.

The whole day went smoothly. Even my salad-for-rabbits at dinner was all right.

These are my final thoughts: You cannot undo months and months of abusing your body with a three-day cleanse. It's also really f*cking expensive to cleanse.

With that said, all of these fantastic, healthy, raw foods are really good for you. And if you bought organic and made your own juice for three days, it would likely be just as pricey.

If you MUST cleanse, this raw food and juice thing is seriously the only sane way to go. Sure, I was pretty consistently uncomfortable for the first 48 hours, but not once did I want to cry/die/jump off a cliff. For a juice cleanse, that is REALLY saying something.