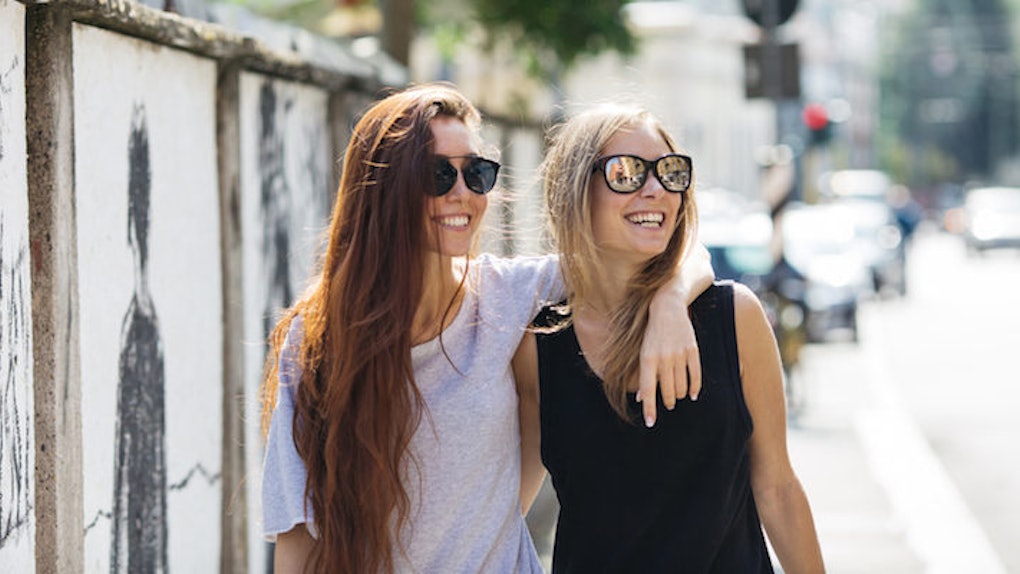 Last week, I was engaging in my typical pre-morning routine: Scrolling through Instagram in pink and white striped pajamas before climbing out of the blissful of abyss of my bed.

I was mindlessly thumbing through a gentle meaningless sea of fashion pictures, mildly amusing memes and boring #FoodPorn (does that term make anyone else wildly uncomfortable?) when I was suddenly caught dramatically off guard. I came across a quote on Dr. Laura Miranda’s (DPT, CSCS/fierce fitness-expert, health-enthusiast) Instagram that bestowed wise words upon my brain:

Be who you needed when you were younger.

A nerve was instantly struck. As I stretched my arms and graced my bare feet on the cold wooden planks of my bedroom floor, I couldn't shake off that damn quote.

It wasn't a negative quote (in fact, it was quite beautiful), but for reasons unbeknownst to me, it began to haunt me. It haunted me in the shower. It haunted me as I brushed my teeth. It haunted me as I adorned my body in tights and a dress. It stayed with me, lurking in the surface of my brain on my five-mile walk across Manhattan to work.

Why did a seemingly simple quote that I momentarily laid my tired eyes upon whilst fumbling through Instagram have such a cutting impact on me?

As of late, I've been experimenting with a new concept: Instead of stuffing the triggering things down, I confront them. I've spent far too much of my 29 years on planet earth chasing temporary highs and turning toward self-destructive (often dangerous) methods to numb uncomfortable feelings, so now, when emotion rears its head inside of my heart, I stare the demon down. Even if it's scary (which it usually is).

They say the only way out is in. So I looked within.

I thought about who I was just shy of 10 years ago. I was in a physically and mentally abuse relationship with myself, and I let in bad seeds, toxic entities who only further chipped away at the fragile glass of my self-esteem. I was an insecure teenage girl who hated her body, restricting and monitoring everything I let inside of it. I lived off cigarettes and lettuce leaves.

At that age, I needed a rock.

But what if, now, I worked toward becoming the rock that I needed back then? What if I did it not just for anyone else, but for myself? For the damaged teenage girl who still takes residence within me?

Not only would I be a better friend to the people I love, but I would be able to fill my own empty spaces.

I felt suddenly empowered. I could be the parent, the sister, the grounding force and best friend that I so sorely needed a decade ago (and still need).

Think of how much better society and our own mental health would be if WE could embody everyone we needed as a kid:

The cool badass older sister who speaks her f*cking mind

We all dreamed of having that super badass big sister who was acutely fearless, that not a single punk ass on the planet would ever dare to mess with.

Imagine if instead of feeling competitive with the people who are younger than us, we instead mentored them in an older-sister-like way?

We could be that fierce force of nature that inspires a young, frail girl to stop letting boys treat her body with the frivolity of yesterday's laundry. We could be the game changer to a self-destructive girl whose been abused so many times that she abuses herself. We could be the person the young girl swallowing a dangerous secret could open up to.

Most importantly, we could find our inner badass who doesn’t take sh*t from anybody.

Oh, God. When I was a teenager and first coming into my sexuality, no one ever explained to me that sex was as much for my own pleasure as it was for my partner's. In fact, sex meant one thing and one thing only: get boy off.

I don't think my experience is at all unique. Imagine how much further along we would be in the sex game if we knew that sex was absolutely supposed to feel good? That if it didn't feel good, something was wrong?

Imagine if we had a person we could talk openly about sex with. Ask all of the questions we were trained as little girls to never ask. Have a safe person to talk to about confusing feelings and traumatic experiences.

If only we had that one person who we could open up to about a touch that made us uncomfortable or an inappropriate comment that made us afraid to go to school. What if we'd had a sexual advocate?

What if we became our own sexual advocates?

The teacher who believed in you when no one else did

When I was younger, I was anything and everything but an academic girl. I couldn't focus on numbers and didn't see the purpose in investing my energy in something I inherently knew I would never use.

I wasn't into sports. I wasn't into after school clubs. I didn't give a f*ck about the yearbook. I never really found "my thing," so to speak and ever-so-easily slipped through the public school cracks.

Until I met a teacher who believed in little ol' me.

I was invisible to my teachers. But this one saw a talent in me. She encouraged me to start writing and acting, and it turned out I was really good at it. I would have never known if she hadn't taken notice of me.

Suddenly I had a sense of worth, purpose and drive. Suddenly the girl who felt like she was merely sifting through school had a voice.

All it takes is one person to believe in you to save your f*cking life.

Be that person for a displaced, lost kid. Look inside of him or her. See something that everyone else overlooks. Everyone, even those who are lost, has something -- we just don't take the time to listen, watch and take notice of it.

And when you do so for someone else, you can start to do it for yourself.

The strong adult who tells you it DOES get better

When you're stuck in a sad, lonely or complicated place in your life, it's easy to feel like you're going to feel that way forever. But the beautiful thing is everything is temporary. Especially feelings.

Don't you wish you had someone who let you know that this sad moment would pass? That this wasn't your entire life?

Imagine how much more survivable life would have seemed if you just had someone, just one person, to remind you there was life beyond the steel walls of school, your narrow-minded small town or your unstable home?

What if you could remind yourself of that?

The parent who loves you unconditionally

But here is the beautiful part, kittens: Those who did not grow up with stable, loving parents aren't screwed. You aren't damaged goods. You're 100 percent capable of cultivating an unconditional love for yourself.

Be the parent you needed. Learn how to soothe yourself when life feels too jarring. Be kind and gentle and patient with yourself, just as a parent should be.

The most amazing part of learning how to parent yourself is this: You will never leave yourself. No matter what. No one can take YOU away from you.