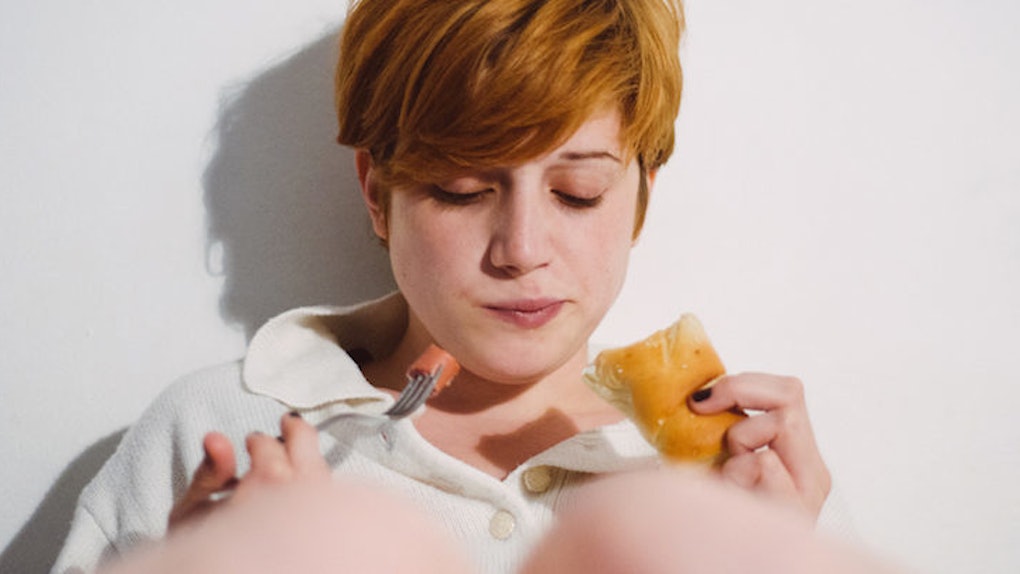 Quick: When that 3 pm candy craving hits, what’s the best way to respond?

Rather than giving into temptation, maybe you should try playing with clay, or firing up a game of Tetris on your phone.

Welcome to the wacky world of food cravings research, where we're unlocking some truly weird ways to maintain our health and weight loss goals.

Want to get in on the action? Here are a few bizarre tricks that could help halt your cravings in 10 minutes or less:

The video above might look like a whole bunch of nothing, but don’t write it off just yet.

When your brain looks at DVN, it has a hard time processing anything else (understandably).

In a study published in the journal, Appetite, researchers showed watching DVN on a smartphone successfully reduced food cravings, and it also decreased the chances of participants actually consuming their junk food of choice.

Stop and smell the…

Here’s your excuse to buy that fancy candle you’ve been eying recently.

One study found smelling something other than food can help reduce your desire for the Snickers bar you’re salivating over.

Participants with chocolate cravings were exposed to one of three different odors, green apple, jasmine or water. Smelling the non-food odor (jasmine) significantly reduced cravings more than exposure to the other two scents.

The researchers concluded sniffing non-food odors in general might be a useful way to mitigate cravings.

Keep some jasmine on hand, or experiment with other non-food scents to find out if scent-sory overload is a tool that works for you.

Don’t say your smartphone never did anything for you.

A recent study from the journal, Addictive Behaviors, found playing Tetris for just three minutes at a time can reduce food cravings.

One of the study's authors, Professor Jackie Andrade, said in a press release:

We think the Tetris effect happens because craving involves imagining the experience of consuming a particular substance, or indulging in a particular activity. Playing a visually interesting game like Tetris occupies the mental processes that support that imagery; it is hard to imagine something vividly and play Tetris at the same time.

The effect didn’t seem to wear off even after participants repeatedly played the game, so feel free to get kind of addicted.

Stopping those false hunger pangs might be as simple as pressing on your ear. (Yes, you read that right.) Acupressure is a form of traditional Chinese medicine that targets “pressure points” in your body.

The practice is believed to balance the body, relieve pain and alleviate headaches.

Studies suggest it might just help stop food cravings, too.

To try it out, simply pinch your nose or earlobes (not too hard!) for 10 seconds, and then release. Repeat the practice over the course of a few minutes, until that longing diminishes.

It's worth a try, right? (Intrigued? Here are seven more science-backed health hacks that actually work.)

Time to unleash your inner child.

In one study, participants who spent 10 minutes building shapes out of modeling clay experienced significantly reduced cravings, compared to those who simply let their minds wander, completed math problems or a verbal task.

Because it involves visual and spatial awareness, playing with clay occupies the brain space that would otherwise be focused on cravings, preventing you from fantasizing about tasty snacks.

Put this research to work for you by keeping some modeling clay in a desk drawer or your coat pocket.

Challenge yourself to build new and different shapes whenever cravings strike.

Of course, if you suspect your issues with food are linked to bigger problems, be sure to consult a medical professional.

But if you’re just looking to stop indulging in a few fistfuls of M&Ms after lunch every day, the answer may lie — weirdly enough — in playing games, smelling flowers or squeezing your own earlobes.

This article was originally published on Life by DailyBurn.