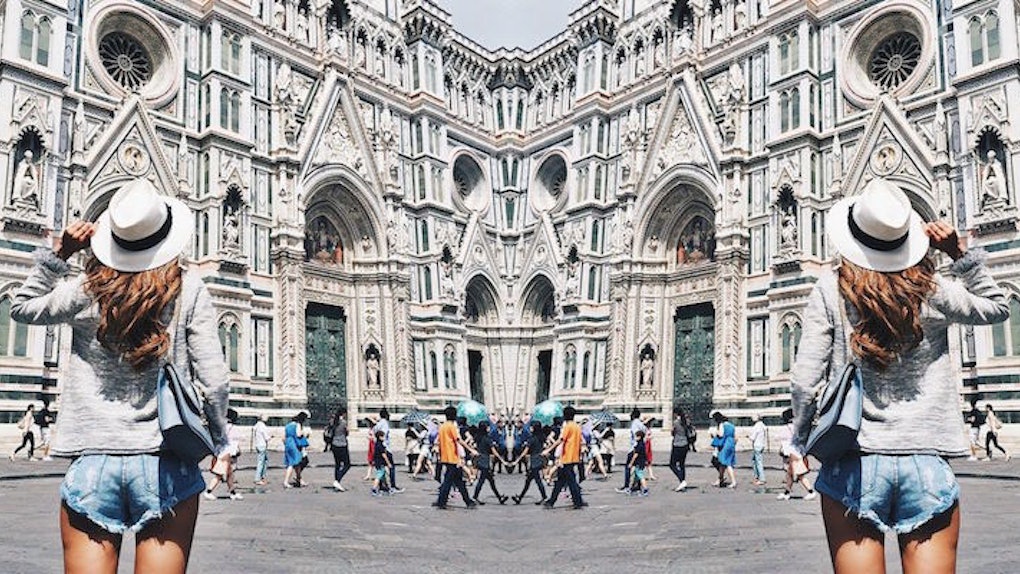 Save Money, Stay Connected, And Stay Smart While Studying Abroad

I’m going to precede this article by saying I don’t know everything about living abroad. Shocker? Not really.

The real shock is that I’m admitting it because most college students come back to the US after five months (or one, if they’re really naïve), and think they’re experts on all things abroad.

But, that doesn’t mean I don’t know a thing or two.

Fair warning: This isn’t going to be a list full of “embrace every moment,” or “be open to new experiences” because that's more clichéd than helpful.

I was fortunate enough to have friends returning home as I was about to depart.

As they were unpacking their suitcases, I was unpacking my endless list of questions on them, most of which were related to phones and phone plans.

I got different answers from various people, so in true meticulous-planner form, I started researching myself.

The options were endless, and getting straight answers from any of the companies was next to impossible. So, I decided to wait until I was on European soil.

In the end, I wound up unconsciously taking one of best friends advice and getting a Pay-As-You-Go SIM card for my iPhone 4S. (If this worked for me and my ancient phone model, chances are it’ll work for anyone.)

For €20 a month, I received an Irish phone number, unlimited data, free messaging to anyone on an Irish network and unlimited network calls.

I could use the GPS for directions and avoid carrying around a map, and I was able to keep in contact with my friends and family back home without international messaging.

2. Download Viber or WhatsApp Before You Leave The US

Both of these applications have the same features, the most significant being they allow you to message people over the Internet from your American phone number, thus removing the need for text messaging all together. Just remember to download and register the app before you leave the US.

If you don’t set up the app before you leave, and you decide to get a new SIM card and try to register your phone with Viber or WhatsApp, it’s going to register the app with your international phone number.

While the apps will still work, this means you’ll either: a) have to explain to anyone you message that this is the new number they have to contact you on, or b) remove the international SIM card, insert your American SIM card, register the app with your American number and switch the SIM cards back again.

Long story short: Make it easy for your friends, family and yourself, and just download the apps before you leave. It takes all of three minutes.

3. Get A Travel Rewards Credit Card With A Chip

In the context of things, this may sound like an extreme measure, considering only five months of your time will be spent abroad. But trust me; it’ll make those five months fly by flawlessly.

If I had to count on two hands the number of stories I’ve heard about people’s credit card information being hacked while abroad, I would need about two more sets of hands.

Though it may sound hard to believe, the US is years behind Europe in regard to credit card security.

For nearly a decade, European countries have lacked the magnetic strip that accessorizes the backs of all American credit and debit cards.

Instead, they opted for the EMV computer chip. In a nutshell, these chips more effectively protect consumer’s private information and greatly decrease the chance of fraud.

With a chip, you’ll also be able to use your credit card wherever cards are accepted. Out of all the people in my program, only a handful had credit cards with chips.

While I never had to give the acceptability of my card a second thought, those with the America credit cards always had to ask whether or not “swipe cards” were accepted.

And more likely than they hoped, the cards weren’t.

And as anyone who has spent any time abroad, whether for vacation, business or change of scenery, you know using a credit card comes with foreign strings attached in the form of transaction fees.

These fees, once called currency conversion fees, are charged by your local credit card companies on any purchases made in a foreign currency. However, with most travel rewards cards, there are no transaction fees.

In defense of all the people who have ever thought converters and adapters were the same thing, it’s not entirely your fault.

A lot of people tend to use these two terms interchangeably when they're referring to an adapter.

However, knowing the difference will be the deciding factor between whether or not your hair dryer catches on fire as you turn it on for the first time. (Sadly, I’m not exaggerating).

Given their names, the purpose of adapters and converters is seemingly easy to remember:

Adapters simply allow you to adapt the plug size and shape to that of the local country, while converters actually convert the plug’s voltage to US voltage.

Rule of thumb? Buy both, and always use the converter with adapter. It's better to be safe than sorry. And by sorry, I mean frying your beloved Chi straightener or tablet.

When you’re packing for four or five months, overpacking is inevitable. You’ve been imagining for weeks what the next semester holds in store for you, and without question, you’re going to look good doing it.

Depending on where you’ll be living and what time of the year, sometimes you have no control over the amount, or size, of things you’ll need to pack.

Winter in a cold climate is the most difficult of them all.

Trying to fit sweaters, scarves, jackets and boots is like one big game of Tetris. It's only made harder by the fact that their bulk renders them the size of two or three normally-sized items.

By Space Bagging all of your items (even the smaller ones), you’ll be able to pack double the amount of clothing without paying for extra checked luggage.

Europe is notoriously known for its pickpockets and — despite living in one of the countries with the lowest crime rates — I was very cautious about where I stored my personal stuff.

Apparently, my cautiousness paid off since I was very fortunate to have gone a full semester abroad without having anything stolen. But, the credit should go to my handbag.

Pretty simple in essence, my go-to was a black crossbody, envelope bag from Aldo that zipped and had a magnetic flap.

In order for anyone to pickpocket me, they would have had to somehow open the magnetic flap (that without fail always clicked and clacked upon opening and closing), and then unzipped the main compartment.

If they managed that without me noticing, then I probably deserved to get pickpocketed. It didn’t cost me hundreds of dollars, but like I said, it probably saved me just that.