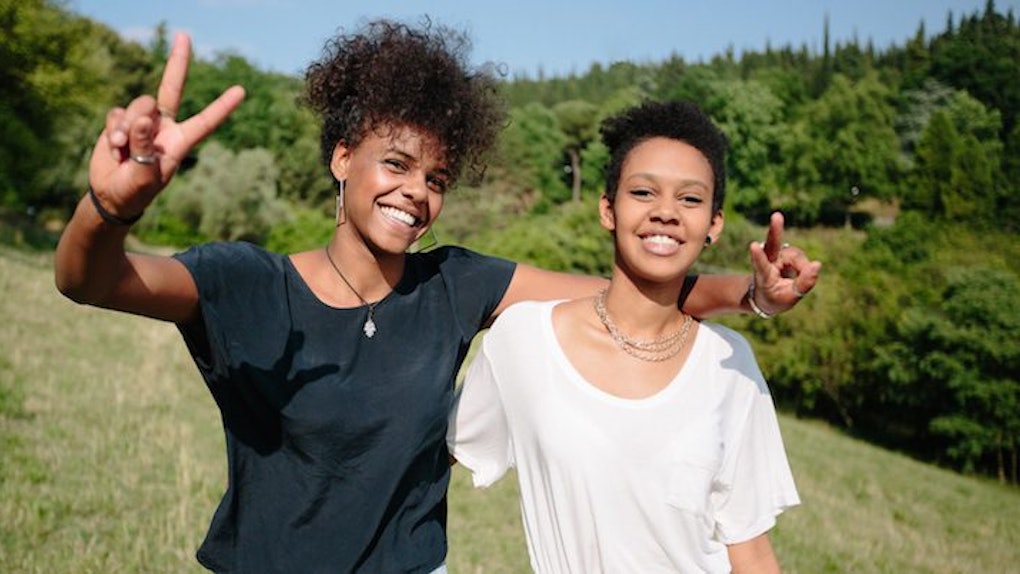 Specific Emotions Only Women With Sisters Can Understand

A few summers ago, my sister and I had been regularly hanging out with a group of friends. One of the guys in the group usually brought his brother out with us too, so we were a little surprised when said brother didn't show up one night.

We pressed our friend for an explanation, which he very obviously didn't want to give. But he finally conceded and said, "He thinks you two are a lot to deal with together."

Maybe the logical response would have been for both of us to be offended, but my sister and I laughed and were pretty fucking proud. Because, uh, yeah, we are most definitely too much to deal with when we are together. And it's awesome.

At any given moment, we're either fighting or finishing each other's sentences "Gilmore Girls" style, while more than likely making fun of the men in room. It's ridiculous.

Sisters are an amazingly terrifying thing, and the emotional roller coaster that goes with having one is not something that everyone can easily relate to.

So here are the four emotions you can't really understand unless you have a sister:

When you have a sister, it's impossible not to have some inner turmoil over why she got the skinny frame, the long, thick hair and the ability to compartmentalize.

Sure, we all experience that sense of longing when you see someone prettier or smarter, but nothing really compares to the rage you feel toward mom and dad for giving your sis the long legs. At least I got the curves. (Not that it's a contest or anything.)

2. Euphoria over your ability to steal.

The best part about having a sister is that you can realize all of your kleptomaniac tendencies without fear of repercussions. Well, I mean, she will get really mad, but that's pretty standard.

There's nothing I enjoy more than my sister visiting and her finding a sweater or necklace she had no idea I had. And let's be real, she feels exactly the same way. It's become a source of pride to see who can go longer without noticing that something is gone. It's a blast, and no cops have to get involved.

My sister and I have so many inside jokes, I wouldn't even know where to begin. Pretty much anything can trigger us laughing, and more often than not, it's completely stupid.

No one really understands the weird connection between our brains. It goes beyond best friends because our jokes can be about something insane our mom did when we were kids as easily as it could be about the jerky guy standing next to one of us at the bus stop.

(That jerky guy is usually standing near my sister, by the way. I don't take busses, and I punch when necessary.)

Friends can come and go. Some truly do stay forever, but it's a sister that you truly never expect to lose.

Fear of that loss can come in a variety of ways: a fight that really seems like no one will be able to move on, a dashing Mountie brainwashing them and taking them to Canada or something more severe. Because, surprisingly, there are worse things than the prospect of your sister moving to Canada.

The point is that when you have a sister (especially a younger one) you're scared you can't protect her and you're terrified you might lose her. Mostly, you're just very worried you'll fail at being there for her. My sister is without a doubt my best friend, my mortal enemy and my family. That's a lot of pressure.

I would never claim that my sister and I have a perfect relationship, but we have a lot of fun even when we are fighting and throwing clothes at each other.

Ultimately, despite all the craziness we put each other through, I know she will always be there for me. And she's already promised me that she will be right beside me driving the getaway car as I run from my hypothetical, but incredibly non-existent future wedding.