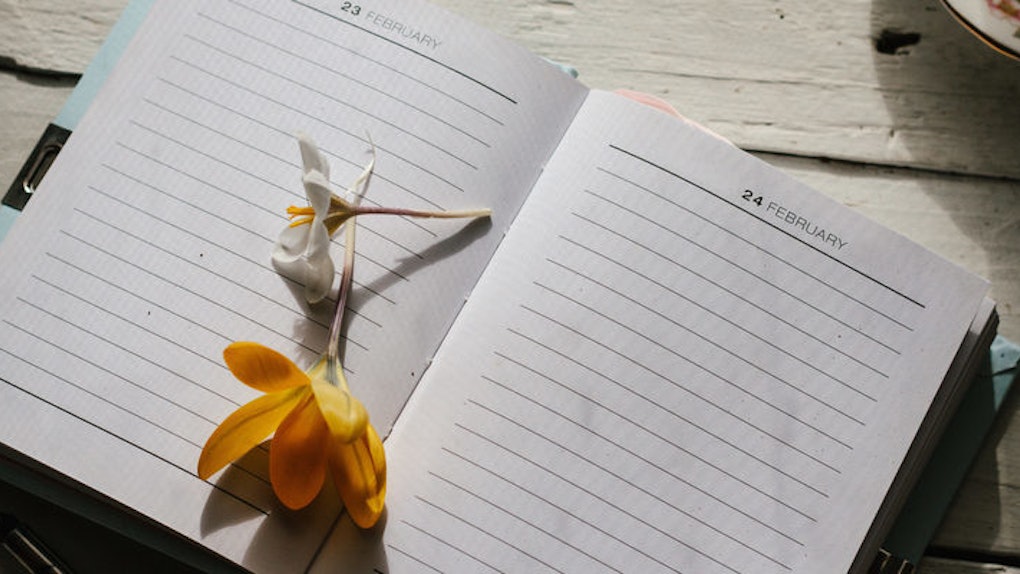 I Was Raped Nearly 20 Years Ago, But I Still Break Down On The Anniversary

I haven't been feeling right lately.

I've long struggled with the depression that snakes its way through the roots of my family tree. I know the warning signs that a bout with the disease is coming on, that my medication needs tweaking.

When I stop being able to get out of bed in the morning, when the thought of something as simple as a shower seems epically overwhelming -- when the basic tasks of undressing, stepping under the water, washing, redressing, drying hair and putting on makeup stack into something that feels literally impossible.

This feeling, the one that I've been feeling lately, is a little different, however. It's not the gray joylessness of clinical depression. That depression for me is more an absence of emotion, an inability to feel pleasure.

This feeling is an aching, a void I can physically feel between my breasts like the cold metal where a necklace would rest. A deep sadness I could drown in, a constant and inexplicable feeling of being on the verge of weeping.

"This tends to happen every year around this time," I explained to my therapist at our last session. "It's the end of winter, a lot of people have seasonal depression. I start to feel better when it gets sunny again."

"That's true," she agreed. "But is there something you associate with this time of year?" she asked. "Some event in your life that coincides with this time?"

And that's when I realized what my body had known before my brain did: It was the anniversary of my sexual assault.

I've  already written very publicly and on several different platforms about the violent sexual assault I suffered at the hands of several men as a young teenager. I went on NPR, and later read comments on my segment posted online from people who felt that my nervous laughter during the segment meant I couldn't really have been raped. I spoke about my experience on "The Dr. Phil Show," and received beautiful letters from people who identified with my story. I'm obviously aware, as are many other people, of the fact that I have been through a trauma.

But I have also done extensive work to heal from this trauma and its resulting effects (addiction, eating disorders, PTSD, anxiety, depression).

I didn't deal with this assault when it happened, instead blaming myself as so many young women do. But I have felt the feelings and processed the experience with interest in the last decade, through behavioral and psychodrama therapy and 12-step recovery programs, among other tools.

I rarely suffer pain related to these events anymore. I work hard at maintaining and managing my mental health, and it is well-managed. Increasingly, I realize that when I think or speak about the effects of trauma as they manifested in my life, I am truly speaking in the past tense. I am largely "healed."

I am stable and happy now. I have over 7 years of sobriety from alcohol and drugs. I am in a loving and intimate relationship. I am a mother. I have come a long way and recovered from events that could have killed me. I am proud of that.

But this despair that appeared so suddenly and so seemingly out of context made me realize that while I am not on a conscious level aware of this trauma "anniversary," my body is, and at this time of year I am flooded with old emotions and flashbacks. And it hurts. It hurts bigger than it feels like I can handle. It hurts like when I first started to let these feelings in.

At times like this, I do not feel like a woman who has overcome horrific experiences and flourished, although I know intellectually that I have.

Instead, I feel like someone who will always be damaged because of the thoughtlessly harmful actions of my perpetrators. I don't feel like someone who suffered horrible events and then used the only tools I knew to survive before hitting bottom and doing the hard work to pull myself back up.

I feel like the sheer volume of problems I've faced, the fact that this taboo, stigmatized thing even happened to me, makes me look like a freak or a crazy person. The events of my life, like rape itself, make people uncomfortable.

And I'm not alone.

According to the American Psychological Association, "Anniversary dates of traumatic events can reactivate thoughts and feelings from the actual event, and survivors may experience peaks of anxiety and depression."

Apparently this phenomenon even has a name: "the anniversary reaction." And it can last for weeks around the relevant date.

Further research let me know that this reaction is often associated with Post-Traumatic Stress Disorder (PTSD), which I was diagnosed with years ago. There doesn't seem to be a large amount of research into the topic, but an article on ptsd.va.gov describes a series of studies involving war veterans who suffer from PTSD:

"The researchers asked the Veterans and their wives to identify the Veteran's worst month of functioning in the past year. When the researchers compared the worst month identified to previously identified dates of traumatic events that occurred during the Operations Desert Storm and Desert Shield, they found that 38% of participants reported that their worst month coincided with the month in which their trauma occurred."

An article on symptomfind.com says the damaging memories associated with trauma anniversaries can produce a mix of mental and physical symptoms. Dr. Matthew J. Friedman, executive director of the U.S. Department of Veterans Affairs National Center for Post-Traumatic Stress Disorder, is quoted in the same article as saying, "A person who has been feeling pretty good all of a sudden feels sad, weepy, perhaps fatigued, and not motivated to do anything."

More personally, I questioned friends with trauma backgrounds to find out if anyone had ever experienced the setback of a trauma anniversary, even decades after the event, even when not consciously aware of the dates involved.

Not everyone who responded had been sexually assaulted, but they had also experienced emotional symptoms around the anniversary of a trauma.

"Mine is different trauma," one said, "but yes, time of year, seasonal changes ... your 'self' knows."

"Even when I keep my mind busy, my body remembers. I've started to use it as a time for self-care and retreat," from another.

"Emotionally and physically unwell in my experience. Hope you're OK."

"Your body has its own memory, and those traumas are not something it just lets go of, even when you're healed."

I am writing this intensely personal piece for those women, and any others who might have had this experience, who might be suffering today or tomorrow or next week from something that happened a long time ago, something they are, for the most part, "over."

I know I'll feel like myself again soon. In the meantime, I'll take care of myself. I'll rest. I'll feel my feelings when I can and distract myself when I can't. I'll take my son to the park and remember that I am doing my best to give him the childhood I didn't have. I'll just do my best, period.

And I will try to remember for myself and the others like me out there that we are not freaks. We are not crazy. We are survivors.