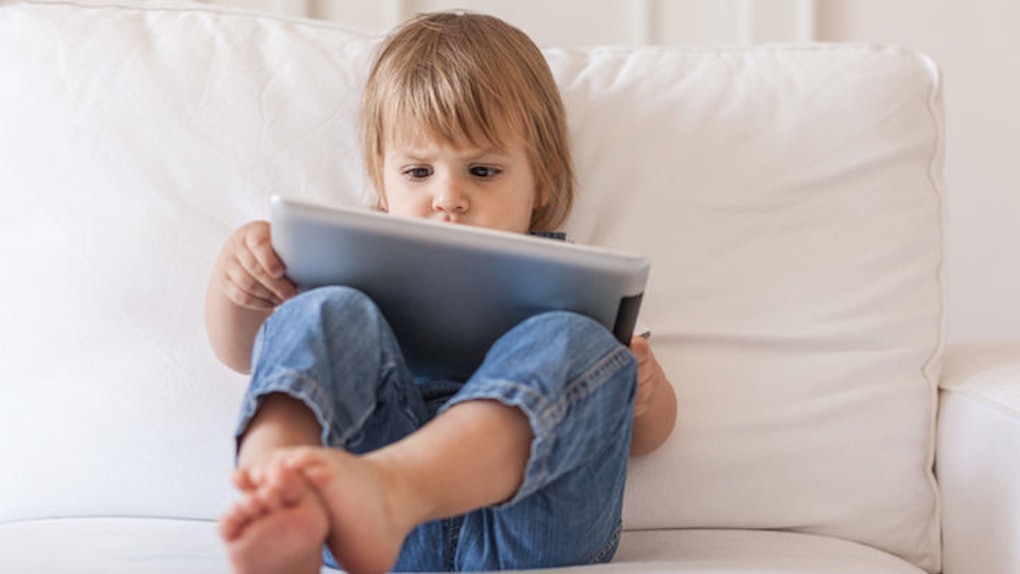 Plugged In: Why I'm Not Ashamed To Say My Toddler Uses A Tablet

As I type this article on my smartphone, my 22-month-old son is on his tablet, watching one of his favorite shows. Yes, my toddler has a tablet.

To be fair, I didn't pay for it. His grandparents chipped in and bought it for him, after seeing how much he enjoyed using my phone to play games and watch videos.

I really don't see this as a problem. It's not like he has the phone or tablet in hands all day long; he has plenty of toys and books to keep him occupied.

I know the American Pediatric Association doesn't recommend screen time for children under the age of 2, but come on. I find it unrealistic in today's world to completely cut off a child from screens.

Sure, it can be done, but like all things that are bad for you, moderation is key.

That being said, my son gets outside for at least two hours a day almost every day. He is incredibly physically active. Even when he's using his tablet, he's climbing on something.

As a mom who is home with her toddler all day long, I consider technology a godsend. Sometimes, I need 20 minutes without someone climbing on me or having to clean up spilled Cheerios.

Handing over my phone can stop a tantrum dead in its tracks.

My phone has come to my rescue in a variety of places: on the bus, at the hair salon and out to dinner. My fellow moms will understand the need for sanity by any means necessary.

Even though I may be quick to surrender to the technology, I still monitor what my son watches and plays. All of his apps are child friendly and age appropriate. They are usually related to the shows he watches on television.

He loves watching videos on YouTube, but they're usually episodes of "Mickey Mouse Clubhouse," or "Peppa Pig." He loves finding music videos by The Wiggles in addition to the occasional Taylor Swift track.

The best thing that happened is he found a wealth of educational videos. They teach everything from the alphabet to numbers, plus phonics and colors.

I had already been teaching him these things, but these videos have been great tools to reinforce the things I introduced. I was going crazy trying to find books and other materials to use as teaching tools, and I never even thought to check YouTube.

The Internet has amazing resources, and we should be able to use them for our children the way we see fit.

When I give him my phone while we're out in public, people often marvel at the ease with which he uses it. They're mostly people who are my parents' age, and don't really know how to use the smartphone they have. I explain that it's a generational thing.

Kids who are born now will never know a world without technology. They're already spoiled by the instantaneous nature of the Internet.

My kid isn't even 2, and he freaks out if the video he's watching takes more than 10 seconds to load. He has no patience for commercials, and he barely watches a video that lasts longer than a minute and a half.

In all of this, I have learned one thing: You can give a kid all the technology in the world, but that doesn't substitute human contact.

Sometimes, while my son watches his videos, I watch with him. This way, I can talk to him about what he's seeing. I play the games with him and ask him questions.