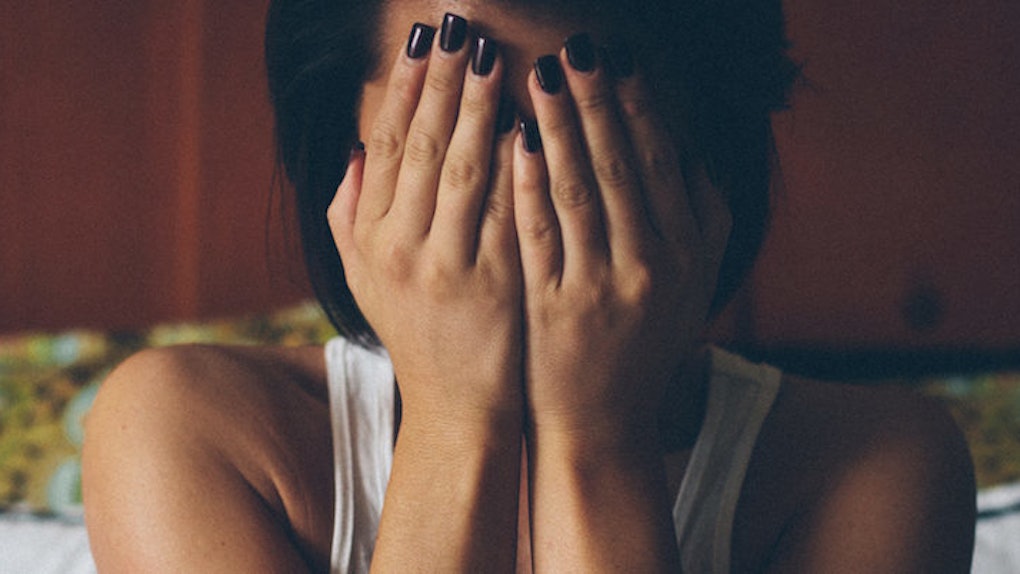 How To Respond To Misguided Friends Who Proclaim, 'Ugh, I'm So Fat!'

This article was written by Katherine Schreiber for Greatist.

Hanging out with a friend can turn from super fun to super awkward in a second.

Imagine this: You're standing in front of a mirror getting ready after barre class when she clutches the flesh of her midsection and begins lamenting its supposed hugeness. “Ugh, I'm so fat,” she says, as if requesting, in girl-code, reassurance that she's totally not.

Or you're grabbing a beer with your buddy when he glares down at his torso and remarks, “Man, I should really get to the gym more often,” perhaps beseeching you to chime in about your own insecurities.

Welcome to the world of negative body talk, where few of us ever really know the right thing to say.

What's with all the negativity?

First, let's dispel a myth: “Fat talk” isn't just the domain of teenage girls. Both genders participate; about 25 percent of men and more than 90 percent of women can't seem to stop putting themselves down, according to some research. And people of all ethnicities, ages and even weights participate.

This isn't good news since trash-talking our own appearance lowers self-esteem, increases social anxiety, and raises the risk of developing eating disorders. On top of that, hearing others disparage their physical makeup can prompt us to feel less satisfied in our own skin.

So why do we do it if it makes us feel so, well, crappy?

“We live in a society whose ideal of beauty is so narrow that few men and women fit into it, and most of us feel our bodies aren't good enough," says clinical psychologist Alexis Conason, Psy.D. “Expressing to others how terrible we feel about ourselves can be a desperate attempt to feel better.”

Women also may be voicing dissatisfaction in a misguided attempt to come off as likable to others.

"Women are primed by our culture to compete with each other,” says Dana Harron, Psy.D., a psychologist specializing in body image and eating disorders. “When you body-bash, you're also making a social statement that's saying, 'I'm not a threat. I hate my thighs too. So don't worry about me; I'm not going up against you.'”

Additionally, men and women alike are under the false impression that women prefer a gal-pal who puts herself down over one who says she's confident.

But studies show that most of us actually would rather be in the company of females who not only vocalize fewer qualms with their bodies but also exhibit confidence in them 3 .

Shame can be much more comfortable than pride for some people because it feels so familiar. Women in particular get the message that it's not acceptable to say 'I'm OK with my body,' so they focus on their mistakes, put themselves down, and become self-effacing, often thinking it makes other people more comfortable.

If we want to end negative body talk, it's important to be sure to continue positive body talk. Remaining quiet about the things we like about our bodies only reinforces the maddening norm that putting ourselves down is okay.

That's not to say we should lie about feeling good about ourselves when we actually don't. (In fact, studies show repeating positive affirmations when we don't believe their content can backfire, making us feel even worse.)

But when we fail to voice being honestly satisfied in our own skin — or whatever parts of our bodies we think are pretty awesome, thank you very much — we miss a prime opportunity to show a strong example to others who are on shaky ground with their appearance, Koenig says.

In general, when a discussion turns to criticizing bodies, you can always validate what you're hearing from your friend or companion and shift the conversation. Rather than engaging in how jiggly someone's butt is, you can observe, “Isn't it ridiculous that we're all so preoccupied with this?” and bring up a new (much more interesting) topic.

It's also perfectly fine to remove yourself from a situation that makes you uncomfortable or to make a solid commitment to avoid spending too much time with people who seem utterly fixated on their bodies' flaws, Koenig says.

For those common scenarios you can't seem to avoid, try these game-changing phrases to shut down the body-bashing.

The Scene: While lifting at the gym, you see a person you think is skinnier and/or fitter than you. Your first impulse is to itemize all the physical ways in which you fall short by comparison, either in the locker room or later that night over drinks with friends.

The Solution: Keep mum. No matter how negative your thoughts about yourself are, giving voice to them only reinforces their power over you, Koenig says. Better to bring these bad thoughts to a mental health professional who can help you sort out why they may be distracting you in the first place.

“Talking badly about our bodies can distract us from deeper, less conscious issues we don't want to face, putting the focus on something we think we can control,” Koenig explains.

The Scene: An acquaintance bemoans the (totally normal) deposits of fat on his or her triceps or stomach or [insert other body part].

The Solution: Rather than commiserating about with how bad you feel about your own bod, Harron suggests reframing the view of fat altogether. Try something like, “Actually, science has shown belly fat is normal and even beneficial. I was happy to learn it helps you process vitamins A, D, and K!” Then move on to the next, non-body-related topic.

The Scene: At a party, a friend pulls you aside to voice her disapproval of a mutual acquaintance's eating or exercise habits.

The Solution: Ask the disapproving friend, “How do we know what her body needs or doesn't need? Are we in her gut?” Conason says. Or steer away from the physical: “Well, I'm not friends with her because of how she eats or what she does at the gym. I love her because she's funny, smart, and loyal.”

And if your companion continues to talk smack, Koenig suggests these words of wisdom: “I'm uncomfortable focusing on what other people eat or weigh. It's really none of our business. I don't like to be judged on what I eat or weigh. Do you?” If your compadre still persists, deliver the real zinger: “Don't we have anything better to talk about?”

The Scene: Scrolling through your Twitter feed, you come across a friend's 140-character put-down about her physique.

The Solution: Send a private message along the lines of: “I saw your post on social media and it sounds like you are feeling down about your body. Let me know if you ever want to talk about it and I'm here for you,” Conason says.

The Scene: You've just wrapped up dinner out with friends, and one or more of them starts agonizing about having eaten something other than salad or “indulging” in “too much” dessert. “This will all go straight to my hips!” they say.

The Solution: Reply, “You know, we have been socialized to worry about these things and I, for one, am so done with it. I'm trying not to obsess about eating and weight, and I feel so much better when I don't. If you're eating, just enjoy it!”

Nixing negative body talk begins with you. It is (unfortunately) normal to feel uncomfortable in our skin. But actively putting ourselves down, playing into someone else's cycle of self-criticism, or commenting on people's weights and eating habits doesn't do anybody (or any mind) any good.

Instead, arm yourself to stay strong; make a pact with your close friends to shift the focus away from your bodies the moment complaints crop up.

Read up on all the ways advertisers manufacture “perfection.” (Photoshop “retouching” has gone off the rails.) And trust that there's so much more to you than how your clothes fit or how your torso, thighs, and arms measure up to someone else's.

This article originally appeared on Greatist.