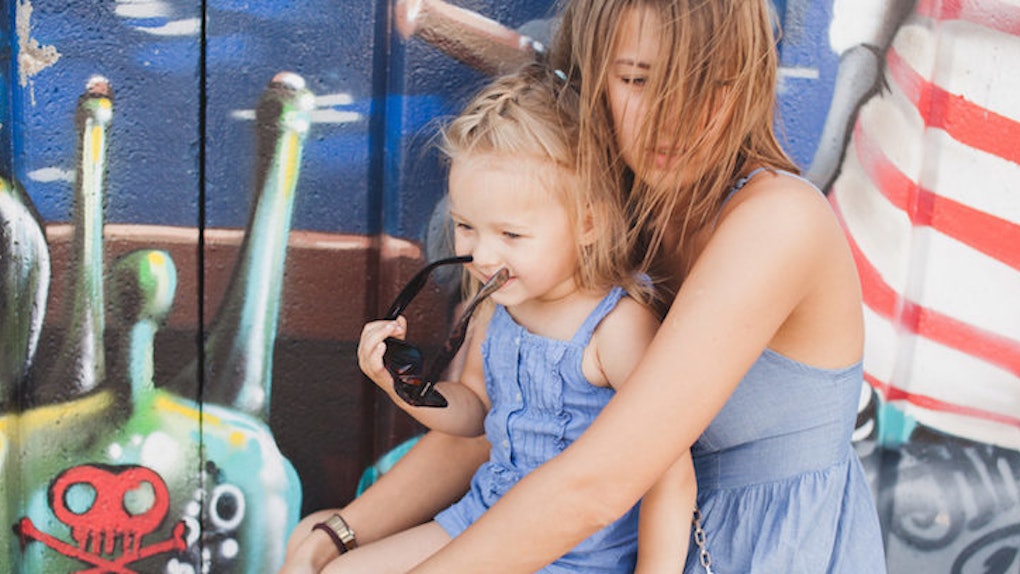 Single parenting: It’s one of those topics that has a tendency to conjure up stereotypes.

Those two simple words put together often project images of an overworked, single mom with five jobs who’s never home. The kid with the tattered shoes and no decent role models. The absent, deadbeat dad who comes in and out as he pleases, leaving a sh*tstorm every time he walks out.

Please. Times they are-a-changing, and those stereotypes (for the most part) are bullsh*t.

Single parents and single professionals are becoming more common than ever before.

As someone who unexpectedly found herself on the verge of single motherdom four years ago, I can relate to these stereotypes. I’ve been there, thought that and lived to tell (and disprove) this outdated tale.

1. Our kids are going without.

False. Most of our kids aren’t going without, and in fact, some of the single parents I know are quite well-off.

Yes, kids are expensive, and going it alone can be a financial strain. I’ve been through short periods of hardship myself, and I certainly don’t mean to downplay the single parents who do struggle to put food on the table.

But, the overwhelming majority of single parents I know are managing just fine. We don’t need your pity, and we certainly don’t need condescension.

Some of us don’t even ask for or depend on child support. Imagine that! Not all of us are dependent on the niceties or financial support of others to survive.

Many of us make a decent living, live in nice homes and support our children financially on our own.

2. Our children’s lives would be better off if the other parent were around.

In an ideal world, all children would have two loving, responsible and capable parents. Unfortunately, reality doesn’t always align with fantasy.

Growing up with an absent parent certainly can take a toll on a child. My heart breaks a little every time my son says that “D-A-D” word.

Having an absent parent can give rise to many unanswered questions, and in the worst cases, feelings of abandonment. But in many situations (mine included), the child is better off with an absent parent than an inconsistent or abusive parent.

The day I spoke with my son’s sperm donor, he told me to just tell my son he was dead. That was the day I knew my son’s life would be infinitely better without him.

I’d much rather answer the question of “Why isn’t my dad around?” than “Why did my dad let me down again?”

It saddens me every time I see one of my friend’s kids cry because his or her non-custodial mom or dad said something intentionally hurtful, or ditched them for something significantly less important.

During times like those, I thank my lucky stars my son gets to have only one parent who chooses to love him consistently, day in and day out.

3. We’re desperate to find a replacement mommy or daddy.

This one is so far off-base that it actually makes me laugh. There are always the outliers, but most of the single parents I know are more cautious about dating and finding a suitable mate now than they ever were pre-child.

We’re picky about who we bring our most prized possessions around. Settling for less than the best just doesn’t work anymore because we have someone else to think about.

If a suitable partner comes along that fits into that family dynamic, then great. But, we sure as hell don’t have the time (or the desire) to be out actively hunting for a replacement mommy or daddy.

I dare anyone to challenge me on this one. I dare you. No takers? Okay, good.

When I found out I was pregnant, I had just lost my home, been screwed over financially by a business partner and was sleeping in a twin bed at my dad’s house.

I chose to build a business instead of sentencing myself to a life of mediocrity and a job I hate.

It was a long road chockfull of taking my infant son on long plane rides, toting him along to two-day business meetings and working from home for over two years.

But less than four years later (and finally enrolling him in preschool), here I am. We live on our own in a nice area of town; my business has increased in revenue and size year after a year, and I’m about to embark on a 13-month travel journey with my son because I’m location independent.

Tell me again how single parents can’t be successful.

The idea here is not to sound like a self-absorbed snob. The point is my story is hardly the exception anymore.

Is it harder to build an empire while taking care of a child single-handedly? F*ck yes! The days are long, and the temper tantrums are frequent.

Some days, it would be far easier to just bury our heads in holes. But, we don’t give up that easily. Single parents are movers and shakers.

Long story short: Next time you’re talking to a single parent, maybe the image you conjure up in your head should be a little different.

Queue the victory music from "Rocky" so I can get off my soapbox now!