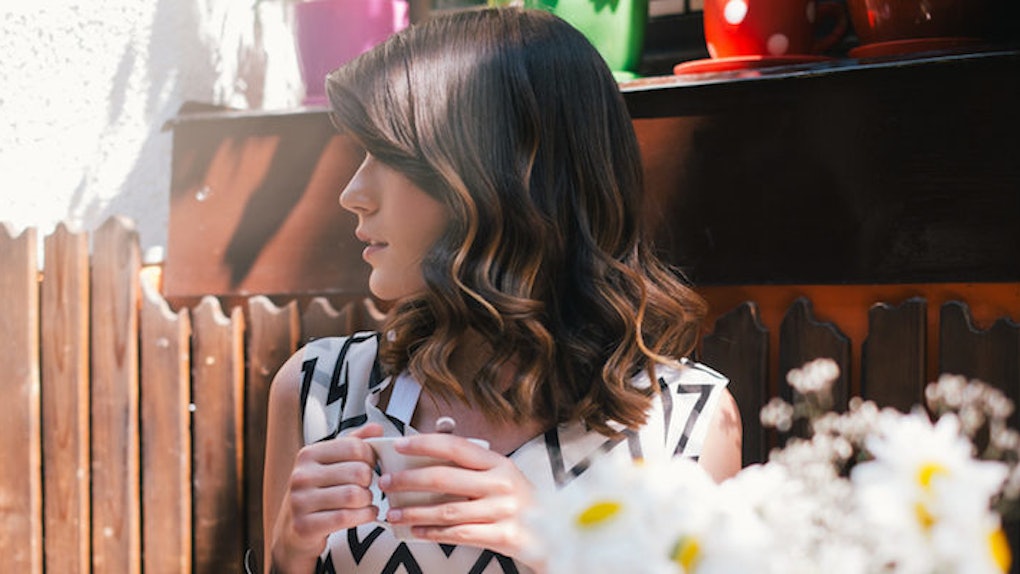 Why Does No One Believe Me When I Say I Don't Want Kids?

Buying a weekly pill organizer was a big step. It wasn't that I take so many pills that I needed reminding of what to take. It was more the actual act of opening two bottles of vitamins, one bottle of a mild but productive antidepressants and cracking my birth control out of its plastic cage seven days a week was becoming too cumbersome. I felt I needed to streamline the process.

The other thing that's happening as I get older is that I want children less and less, to the point of not at all. And every time I mention this to friends (I've yet to break the news to my family), the reaction is always the same.

“You'll change your mind when you meet the right person.”

They are also consistent. When I express this choice, people think I'm lying. And if they don't think I'm lying they think I'm wrong. It's as if wanting children is somehow an unacceptable stance for a woman to take. To the point that it's about as believable as the existence of the Tooth Fairy or Donald Trump running for president. They trust my taste in music, my advice on social media, but this very personal choice can't possibly be believed.

Making my lunch for the week is roughly as taxing as medicating myself. Pre-planning, shopping for and prepping meals is mental anguish and annoyance I feel is simply worth $10 to $12 per day to avoid.

The dishes, too, have fallen victim to my aging process. With every year gained so comes a new level descended on the “screw it” staircase of life. Somewhere around the age of 32, my Saturday mornings started being all about washing a week's worth of dishes and plotting my next raise that would allow me to live in an apartment with a dishwasher.

The older I get the more convenient I need things to get and the less convenient they become. When we were kids, people used to cut our food into little pieces for us. They would tie our shoes. It's such an injustice that when people wait on us hand and foot, it's only when we can't possibly appreciate it.

One morning, in the middle of a cup of coffee and an old episode of No Reservations, a strange question waddled across my mildly hungover psyche.

How do parents take care of not only themselves, but other humans, too? Other humans who can't take care of themselves and if someone doesn't take care of them, charges will be filed. Is there some secret battery pack of energy parents are issued at the birth of their first child that makes them able to take on the greatest responsibility short of the nuclear launch codes? I don't think there is; I've asked.

People are literally subjecting themselves to the scrutiny of the law by having unprotected heterosexual sex. And they're doing it willingly. And don't talk to me about “accidents.” The existence of second-born children alone is enough evidence that people are choosing and somehow enjoying this way of life.

I will never understand it, or maybe I just don't ever want to. Caring for myself and one eight-pound rescue cat is all the responsibility I need in this life and even at that I'm spent. I have my groceries delivered because it was simply taking too much time to complete the three-and-a-half mile round trip to Trader Joe's and back with a bag of jarred pesto, seasonal greens and various apple varietals on my back.

Every Saturday I wake up around 8 am. I've never been a late sleeper. And even as I rise early, I have the same thought, weekend after weekend: "If I had a kid, I'd have been up for hours by now." The moment I got out of bed would no longer be an intrinsic decision. It would be guided, if not forced, by another person. Another demanding person. Another person my own body (traitor) would feel compelled to care for, with or without my mental consent.

Every time I mention to someone that I don't want children, they look at me like my eyebrows are made of earthworms. But I ask you, why does no one question the sanity of someone who sentences herself to a lifetime, literally a lifetime, of someone else being in charge of what she does?

We spent 18 years inching our way to freedom, only to find that freedom comes with bills. And horrible jobs that degrade you, that make you “pay your dues” as you attempt to climb to the next, slightly less horrible job and so on and so forth. We aren't free.

Money is our captor once we're no longer children. Taking financial care of ourselves isn't an easy thing; it comes with many lessons learned over time and there's no way around it. Getting to a place where we're no longer living paycheck to paycheck -- that is freedom, and it takes a while to achieve.

Freedom is setting up your bills on autopay and knowing you'll never overdraw. Freedom is paying full price for a pair of Madewell shoes. Freedom is saying yes when a friend asks you to book an expensive vacation with her six months out. Freedom is quitting the job where your boss verbally abuses you because you've got enough cash saved up to last until you find something else. That's freedom. And do you know when freedom happens? Right around the same time you're “supposed” to have a baby.

I've just recently achieved some semblance of freedom. And I'm balancing delicately on the edge of it. I've just claimed a level of control over my own life that can only come from not needing to ask your parents for help anymore, not even when shit hits the fan. I'm here. I can afford the broker fee on my own. I just paid for my cat's surgery (shut up) all by myself. And now that I'm here, it's time to fork my life over to someone else? Are you out of your goddamn mind?

I don't know how long it's going to take to do everything I want to do as a free adult, but I can promise you it isn't set on a timer that's wired to my uterus. I might not be done by the time my body is still “fresh” enough to conceive. I might not ever conceive or even want to. The cookie might just crumble that way. And it's my cookie. It's a big, bitter chocolate chip-filled bakery delight. It's not an organic, flavorless biscuit sized for the hands of a toddler and meant to be consumed soggy.

The last time I had the flu, I was essentially comatose in bed for days. Every movement felt like torture and my bedroom was a graveyard of tissues and used bags of green tea. I could barely make it to the door to accept my online delivery of soup. If I had a child, I would have literally had to hire help -- and not for me. I'd need a warm human body to come to my house and do all the things a parent does so that my child didn't starve or hurt himself more deeply than a skinned knee. Forget taking care of the actual ill one, I'll be just fine. It's the healthy member of this household that needs looking after.

And, of course you know, having a partner in this is not a given. We're “supposed” to want children, sure, but only once we find a husband to have them with. And those of us who don't find husbands? Are we not allowed to want kids? Those smiling, warm, albeit a little pushy bits of small talk at birthday dinners and Thanksgivings are handed out with such generosity if you're married. If you're not, telling someone you're having a child on your own is not unlike telling them you've decided to have your left thumb removed.

It's shocking how much of life is guided by the proper order of small talk. Graduating, getting a job, meeting someone, dating them, getting engaged, getting married, having a baby. That's the proper, acceptable order. That's the order that won't get you gossiped about in synagogue at the High Holidays. Then you become the one who dishes out the small talk.

And you can tell if you're on course by the tone. If you're getting that optimistic, interested, smiley vibe, you're doing fine. A cautious, muted expression (nervously sips drink)? The branch is creaking and you need to get moving. Solemn concern, tilted head, a hand on your arm? You blew it. You didn't do it right. We don't want to talk about you anymore because it makes us uncomfortable.

As a logical human being I do understand that I might be wrong and would welcome arguments people can give me in favor of having a child. But the reason can't simply be the frozen yogurt swirl of loveliness called “motherhood.” The “beauty” of motherhood isn't going to be enough for me, because it will have taken away so much, too.

They say motherhood changes everything and that I believe, both in good ways and in bad, but I need specifics. What's the return on investment here? Can someone quantify that for me?

Even after the years where he knows how to poop on his own from start to flush, that's when really interesting stuff starts to happen. That's when he becomes a person who thinks and makes decisions on his own, like whether or not to burn my house down. There's a whole world out there that's certainly had it's way with me, now it'll get its hands on my kid, too? I don't want that! Is this kid going to be bullied in school? Will he be the bully? What if he impregnates something? Or starts smoking, for heaven's sake? He's going to inherit my math deficiency. Someone SAVE THIS KID!

It's inevitable that we seek the approval of others. Sure, I've stopped caring what other people think of the time I like to go to bed or the volume of wine I like to drink. But the really defining moments seem sweeter with the support of people I love. Even us single bridge trolls have feelings, I guess.

I think it would be great if all kinds of life decisions were acceptable. Remaining childless, cohabiting with friends, living in yurts. I'd love it if every decision I've ever made that didn't make for good small talk still had the same ability to elicit approval and pride from my friends and family. But I think we've been conditioned. We were babies someone had once, too.

I know I think people who have kids are somewhat insane, but I'm no more sane than they are. I'm a loon. I'm trying to marry personal decisions with outside approval from people entirely unaffected by them. It's my decision, I just want you to like it.

Because in my head that means you still like me. And that's nuts. The people that really love me, the ones I really love, are allowed to disagree with me. They're allowed to not like my decisions, but still like me. To take the things they don't like and engage in some sort of mental compromise that allows them to still invite me out for dinner.

What I'd really love is the next time I tell someone I don't want to have kids, they're able to look at me and reply in sincere honesty, “Good for you.”