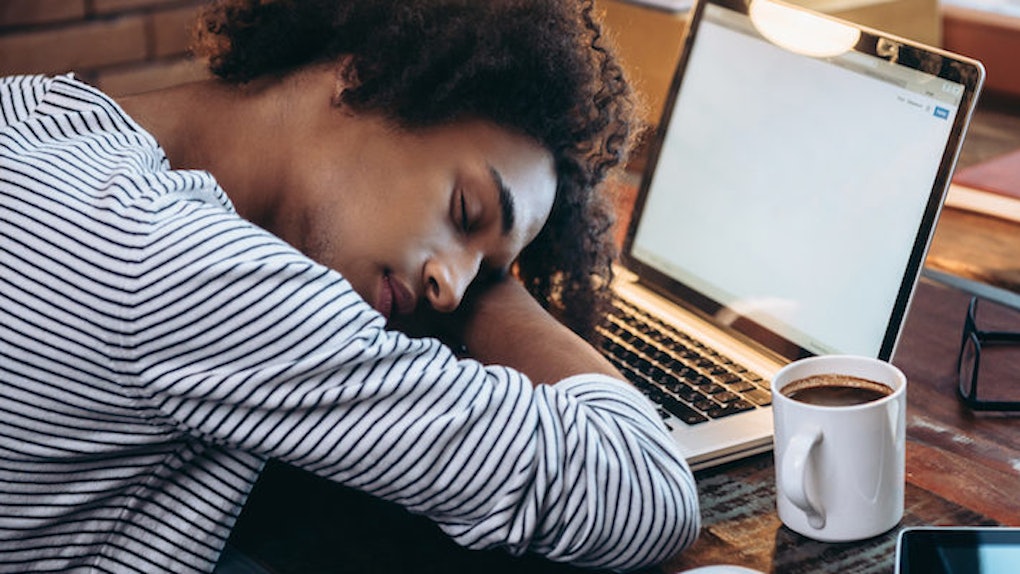 Happier, Less Stressed And Richer If You Take Daily Naps

Hey, sorry I can't hangout today anymore. I have decided to nap instead. Bye!

This seems to be a perfectly valid excuse to me, but it doesn't always go over so well with my friends, and I've never understood why.

It's not like I actually care about their opinions when it comes to my precious pillow time, though. In fact, I consider naps to be more important than any of my friends.

Seriously though, napping is very close to my heart -- it's probably my favorite part of every day.

I've certainly missed quite a few scheduled activities that are considerably less important than napping, such as the following: classes, doctor appointments, dinner with the boyfriend's family, picking up my brother from school, etc.

And that's just this week.

But seriously, I truly believe napping is good for your mind, body and soul. And if you're still mad at me for sleeping through our plans, don't be: Science has proven me right.

According to research, taking naps helps to improve your memory, expand your creativity and benefit your overall health.

Can you really blame a kid for trying to improve his quality of life? Jeez, I thought we were friends.

Here are just some of the endless, bountiful benefits of choosing naps over everything.

Anyone who knows me can tell exactly when I'm in need of a nap. I look tired, feel cranky and am easily irritated. I'm literally an adult baby.

A study published in the Journal of Clinical Endocrinology & Metabolism (JCEM) shows that a 30-minute nap can leave someone who woke up on the wrong side of the bed feeling fresh and rejuvenated.

Medical Daily reports that the study included 11 healthy participants who were given two, 30-minute naps the day after experiencing only two hours of sleep during the night. In another session, the same men were deprived of sleep but not allowed to nap.

When they had 30 minutes of shut-eye during the day, they did not develop sleep deprivation.

Brice Faraut of the Université Paris Descartes-Sorbonne Paris Cité, an author of the study, said in a press release,

Our data suggests a 30-minute nap can reverse the hormonal impact of a night of poor sleep.

So, if you need an extra 30 minutes before you can say you "woke up like this," go for it. I'm not judging.

People who nap are less stressed than the rest of us

Our generation is known to take our work home with us, and we generally live more stressful lifestyles than ever before.

We're becoming enveloped in our work and school lives, with constant notifications and online access at our fingertips. I don't know about you, but sometimes a nap in the middle of the day just helps break stressful things up, as well as provides some room for clear thought.

One study shows that taking a quick nap in the middle of a stress-filled day can actually help you handle tough situations and tackle difficult challenges more effectively.

The study, published in the International Journal of Behavioral Medicine, tested the blood pressure levels of 85 healthy college students throughout the day at the Allegheny College in Pennsylvania.

The results found that those who were allowed to nap for 45-60 minutes after a stress-inducing task had significantly lower blood pressure compared to those who stayed awake, the Daily Mail reports.

So, if you catch me taking a tiger snooze at my desk, it's not because I'm slacking off. In fact, there's a good chance I just performed a truly incredible feat and am preparing for my next act. So, please, leave me alone.

You're more productive when you take nap breaks

TIME reports that college campuses across the United States are installing "snooze rooms" in an effort to increase productivity.

Schools like the University of Michigan have already implemented cots and high-tech chairs in its libraries to promote daily napping, and James Madison University has added bean bags in the nap room located in its student center.

Ryan DeAngelis, a 21-year-old senior at the U of M, is double-majoring in neuroscience and philosophy, and he's glad his school added the comfort zones to his library.

You're going to wake up in 20 minutes and keep working, but if you go back to the dorm, you're tempted to fall asleep and then maybe procrastinate 'til the morning.

Napping during finals is an essential part of surviving the hell week students across the United States endure each year. Every college should have snooze rooms; it's only right.

If you're a creative person, you may be even more interested in jumping back into your bed after reading this one. Research shows that people who take naps have more activity on the right side of their brains, the region of the brain closely connected to creativity, CNN reports.

The study involved connecting participants' heads to optical fibers placed symmetrically around a person's scalp. The fibers then sent infrared light through the brain in order to measure how much light returned.

Researchers found that, when participants were given the chance to nap, the blood flow in the right hemisphere of the brain picked up, showing that activity in the creativity region of the brain became enhanced.

So, if you are fond of the arts or have a creative side to you, napping should probably become a priority.

Napping is good for your memory

Researchers at Saarland University in Germany found that people who took naps had memories five times better than anyone else's, according to the Huffington Post.

The study consisted of 41 volunteers who were asked to perform a series of memory tests to reveal overall memory patterns. Those who enjoyed the glory of napping on a daily basis turned out to have more accurate memories.

What's even more interesting is that, after studying the effect of naps on memory, researchers found participants performed better at the memory tests as they began to nap more regularly.

You save more of your money when you nap

If the rent check is due soon, and you may or may not have blown through two weeks of savings in bar tabs and late-night pizza, napping may be your best bet to holding onto what little money you have left.

It could be seen as an excuse, but it's true: Napping will actually help you save more in the long run.

Think about it -- when you're not napping, you're likely out spending money on sh*t you don't actually need. Reason #8492 that I'd rather be in bed. A fat wallet is a happy wallet.

At least until my rent check clears.

Beauty sleep is a real thing, and napping helps you become a dime

Beauty sleep is one of the most crucial aspects to just about any skin care or beauty routine out there. Now studies show that sleeping could be the natural supplement needed to promote beauty, as well as a fresh face.

It's not that far out if you think about it: Your face is composed of various muscles, and just like the rest of the body, those muscles require a sufficient amount of rest time.

Babble says that by getting in some nap time each day, people may be able to eradicate the need for facelifts entirely. Some extra Zs could potentially stall, or even reverse, aging effects by letting your face muscles and skin rest.

Isn't it all starting to add up? Napping is an important part of our health and overall well being, according to pure, hard science.

Students would be more alert and prepared, artists would be more creative and everyone would be a bit happier in general. Napping should be a right for all people protected by the federal government. There, I said it.

So next time you skip out on an event, don't let anyone tell you you're just making excuses. You're not lazy; you're improving your health.

Enjoy your extra 15 minutes. You deserve it.