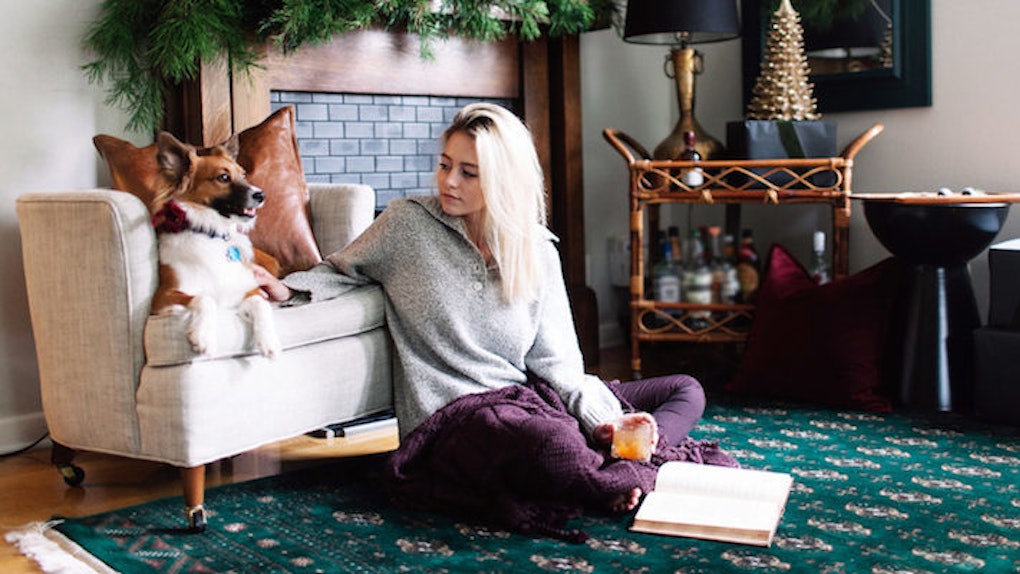 On the outside, I look relatively ordinary. I have the same colored eyes, I have the right number of fingers and toes and braces can speak for a lot. I don't wear pilled cardigans, '80s glasses perched on the end of my nose or nude-colored tights with runs. I eat with my mouth closed, and I have an aversion to Crocs.

But I'm also a 25-year-old who is living at home with her parents. I'm under the same roof, using the same kitchen (metaphorically) and sharing a pre-historic Internet connection that somehow satisfies their needs, but makes connecting to YouTube impossible.

It's a bizarre predicament to be in, and though perhaps becoming more common with rising house prices, it's not exactly a bandwagon anyone willingly jumps on. It's not the Furby for those in their mid-20s. This is not a trend.

However, after leaving home at 19 and living in multiple countries for over four years, being back in my hometown is not without a strange feeling. Indeed, the notion of being under my parents roof surrounded by childhood relics is certainly unusual. I was coaxed with real food with vitamins in it, as vegetables are a rarity for young independents living in expensive cities.

London taught me nothing if not how little I can live off and how often I can consume expired goods from the Tesco discount section. As I explained to my mother on countless different times, recent scientific developments have deemed it not expired, but "best before."

And "best" is something I gave up in order to travel. It has been replaced with milk at yogurt consistency and the most indistinguishable kind of meats. Tuna on toast for every meal is the making of champions.

My parents were not strict disciplinarians as I was growing up, and as a mid-20-something, they certainly weren't going to start. The mistakes they made in my years of development are truly set, and my return would do well in reminding them.

Moving home was not done without considerable thought, but the truth is that financially, it absolutely makes the most sense. I tried to find an out that would offset this obvious trump card, but I never could.

I back the mass exodus of late teens from their familial homes to live on their own and earn their own money to spend on rent, power bills and nightly alcohol. But, having done that for a number of years, I suddenly saw the advantage of retreating back to that childhood roof. I would be returning to college, and I'd no longer be earning a full-time wage.

It would be silly to spend my savings on housing myself in the same area, when I could count on free rent and cleaner carpet. But, it was a package deal. The lack of mold and central heating came with two people more than double my age who still feel the need to ask me relentless questions about my daily life.

A quick trip to a friend's house is not without an intervention about place, duration and activity. I started to worry I would revert to my 12-year-old self, wear clip-on earrings and delve into a deep obsession with the Olsen twins (which admittedly never went away).

What I regretfully started to learn was that they aren't too bad. They still maintain a home, a garden, have jobs and even use their laptop with relative efficiency. I taught my dad how to turn his iPhone off, as he didn't realize the phone had a button at the top.

Although there were a few minor initial stumbles (being out late does not mean I'm in trouble or lost in a ditch somewhere like when I was younger), they don't parent me just because I'm back under their living arrangements and they're paying for my existence.

They are a constant source of advice and aggravation, mostly without even trying. I can go from interested to irritated in less than one breath and back again in one home-cooked meal. I discovered I can forgive anything if it's delivered with a steaming plate of herb-sprinkled roast potatoes.

The fridge and pantry are always fully stocked. I don't know if I ever noticed this when I was younger, but I'm assuming I took it for granted. I probably thought it was stocked by the magical maid who also ironed my clothes and cleaned my breakfast dishes.

Running out of food was inevitable when I lived with roommates.  I would frequently return home from work to find a bare cupboard, dust circling the space where food should be, and a lone bottle of half-empty wine providing an exclamation point in the resolute darkness.

In comparison, home is a ready-made supermarket at my disposal, and payment is not necessary. Gourmet delicacies are at my fingertips, opening me up to a world of consumer goods only bought when you pass the stage of financial inadequacy I seem to be unable to escape.

But, there is a form of payment for these luxuries. I pay for it every day in different measures, but always with undetermined patience. The payment comes by tolerating roommates more than double my age, and the intricacies that come with it. While I'm used to putting up with roommates who come home at all times of the night, staggering through the door with a member of the opposite sex close behind, it's quite a different tolerance needed for those over 60.

My dad refuses to get very necessary hearing aids. Just the other day, I asked him if he could help me change the oil of my car, and he merely glanced in my direction, saying, "It's going to be 39 degrees in Sydney tomorrow." Although he has not mastered the English language or the ability to listen, he often delights in speaking French with me.

He smiles as he produces words like "beret" from the seeming depths of his memory bank, inserted into no context whatsoever and pronounced with special emphasis on the "t," so that no Francophile would ever understand. Beret, he'll say while eating dinner, midway through a discussion about house renovations.

With one French word apparently mastered, he added "canape" to his repertoire, which the world pronounces as "cana-pee," but my dad eagerly esteems is "canap." He is a trailblazer in more ways than necessary. Sometimes said in quick succession from beret, anyone who understands him wouldn't have a hard time believing that he had just eaten a hat.

While trying to tell yourself you can manage the finer differences of your parents' ways, it is harder admitting to friends that you're back in your single bed with the "Winnie The Pooh" sheets, watching "Downton Abbey" with your mom and the cat and making it past 9:30 pm for "The Graham Norton Show" on Thursdays.

It may not be conducive to meeting your future spouse or to inviting strangers met in clubs back for beer pong or darts, but these thoughts don't trouble me as much as they probably should. I'm lying in near cloud-like comfort — thanks to a sheet count I didn't know existed — and I have a belly full of nutrients not found in microwaved meals. I have been cocooned in the comfort of familial homeliness, and I can't see a way out.

The prospect of entering a flat with strangers who won't cook me meals or be forced by love and blood to tolerate my downfalls is frightening. I'm so out of the game I've forgotten how to play. Suddenly, being over the hill — nestled by an impending pension and a buddy to pillow talk with (even if he's sound asleep and happily letting silent farts escape into the oven) — doesn't seem like such a bad place to be.

I will move out at some stage, obviously. Although my mom openly muses she would be delighted if I never left, my dad stares off into the distance, wishing his hearing was worse or imagining a life far away from talk of hair straightening, the wrong shade of blush and the hot water bill.

There are amusing sides to having flatmates that receive the pension. My parents are both active and go for a long walk to the bottom of our hill and back up every day. Unfortunately, their knee joints only sometimes join them. Agreeing to accompany them, but strolling many yards ahead and still feeling like I'm being passed by trees, I turned around to find my mother conquering the hill like a sailor does the wind. She was tacking up the hill and drawing out long diagonal lines across the pavement, so as to ease the discomfort of her leg joints in an ambitious vertical climb.

She looked drunk. My father was following behind in her slip stream, looking like he'd consumed absinthe for breakfast and trying very hard not to let it come off that way. Coincidentally, he uses a similar face after a big meal, not long before excusing himself with the newspaper for a considerable period of time.

I'm not surprised most people don't live at home at my age, and it would be concerning if I encouraged it. I know I can only speak for myself and my situation, but I am enjoying its benefits at this stage. My bank account looks much better, and I am certainly healthier.

Even spending more time with my parents is a benefit, if you realize that their time on Earth is certainly shorter than those of my friends. I have learned invaluable knowledge about finance from my father, and I am a sous chef to my mother (although I frequently eat the ingredients when her back is turned).

In turn, I have inspired my parents to attend more events in the city, my mom has tried to step up her fashion game (my father is beyond help) and they have decided to travel more (which I, perhaps wrongly, don't take as their escape plan from me). I am secure in the knowledge that I am perfectly capable of living away from home, have done so and absolutely plan to do so in the future.

I have experienced wonderful parts of the world, and I had a thoroughly good time living overseas with different kinds of people. But, the gains from living at home at this exact point in my life far outweigh the negatives.

This is something I constantly reevaluate. I do so when I find myself relying on my mother's cooking and cleaning, when I run to my dad to kill a spider or when I forget that most people my age are paying for their own Internet bill. Likewise, I am building a list of things I won't do when I reach their age.

I'm realizing that with patience, humor and deep breathing exercises, you don't need to be medicated to live with your parents as an adult. I think we can all learn from that.