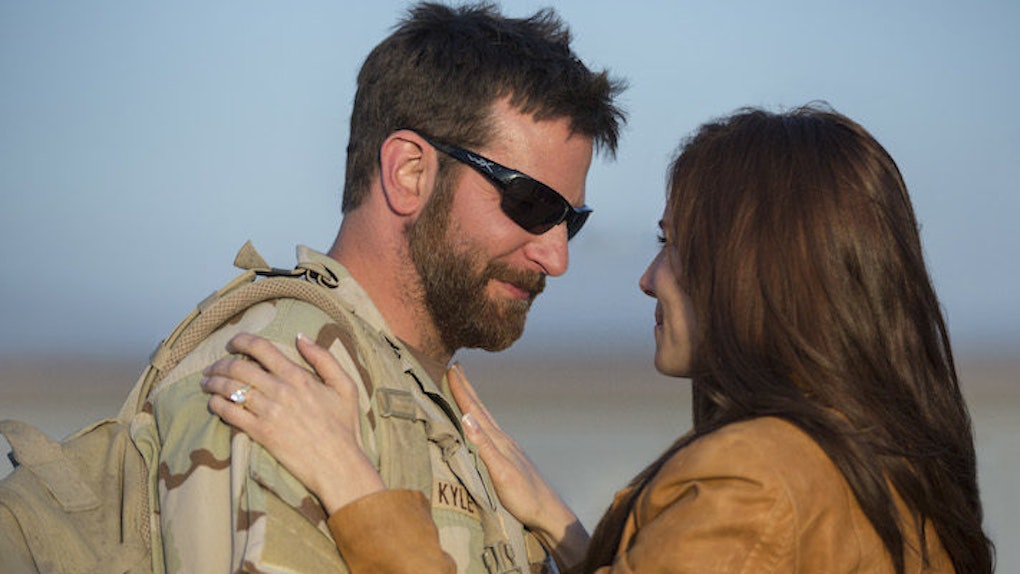 It takes a special kind of person to not only desire a relationship with someone serving in the military, but to also have the strength to maintain the relationship and continue to grow with his or her partner.

The first time I met my husband was at a college party with mutual friends.

We attended the same university and knew a few of the same people.

That night, I leaned over to my friend and said, "He's the most attractive person I've ever seen."

Two years later, he actually spoke to me for the first time.

Well, in those two years, he also put school on hold and joined the Air Force.

Six months after we started dating, I put all of my career aspirations aside, accepted the first job offer I received in the state he was stationed in and moved 1,400 miles across the country.

Then, six months after that, we did the damn thing and tied the knot.

It's been almost a year since then.

Here are eight things you need to know about being married to the military:

1. There are a lot of acronyms.

When you encounter a situation in which they're used, you're going to feel like the stereotypical, clueless civilian spouse all military personnel joke about.

You'll catch on eventually, and you might even find yourself joking about the new MILSO on base.

2. MILSOs have a really great bond.

See? Another acronym (kind of).

Unless you're a MILSO or know someone who is, this means nothing to you.

MILSO is slang for "Military Significant Other."

You can look up #MILSO on virtually any social network and immediately find a large amount of posts providing support, advice and general rants about how much deployment sucks.

Regardless, we all have one another's backs and always have an open shoulder to cry on.

3. Sometimes, you meet the exception.

Upon my first encounters, I generally thought very highly of the fellow MILSOs I met.

These women (and occasionally men) let their lives be at the mercy of the military in order to be with the people they loved.

However, I once met a MILSO who gives the rest of us a bad rep.

This wife, in particular, is like the ones depicted in movies.

She is a stay-at-home mom who spends her days shopping for designer handbags.

Unless her husband supported this lifestyle, she wasn't happy.

I'll touch on this in my next point, but I admire the people who live this life while also maintaining their careers and sense of independence because it certainly is not easy.

While I was in college, my biggest aspiration was to work in professional sports.

I worked for teams and organizations in the NCAA, MLB and NBA, and I spent the majority of my free time staying up-to-date on the world of sports.

When I made the choice to be with my husband instead of keeping my options open to the 49 other states, I thought I was just putting my career on the back-burner for a bit.

I was dead wrong.

I ended up interviewing with an NHL and NBA team in my new home.

Once I told my interviewers my husband was in the Air Force, I started getting grilled with the "what if" questions.

I was asked about my dedication to the career and the odds of being relocated.

This might sound ridiculous, but I've told my husband if it's the right job and he receives orders elsewhere, I won't follow him immediately.

To have my passion for the sports industry questioned because of whom I chose to spend my life with was really disheartening, but it's something I plan to pursue again at the right time.

5. Deployment sucks more than you anticipated.

I went through my first deployment after being married for less than six months and living in a city where my only friend was a former co-worker.

Although we got lucky with my husband's orders and the blessings of WiFi and iMessage, physically not being with someone you wake up to and fall asleep with every night is hard.

I've had to learn to eat alone at nice restaurants, pick up hobbies I can do independently and lose tons of sleep for phone calls when there's a 10-hour time difference.

I've been told the first one is always the hardest.

6. "Boots on the ground" is the worst phrase to hear.

Due to recent events all around the world, groups in the US are pushing our president to combat acts of terrorism with "boots on the ground."

To those of us living a military life, that phrase means so much more.

It means putting husbands, wives, mothers, fathers, sons, daughters and loved ones in the line of fire.

It means constantly watching the news when you'd rather not because you need some peace of mind that it won't be your loved one risking his or her life for our freedom.

When people ask me about our wedding, I have to tell them I wore a leather jacket in a courthouse because I had driven straight there after a three-hour flight home.

We didn't have friends and family there, we wore everyday attire and afterward, we ordered Chinese and binge-watched "Friends."

That's how it is for many military couples.

Planning a wedding is a lot of work, but so is arranging extended leave when you're preparing to deploy.

It's not glamorous, but it's our reality.

I find no shame in telling people that.

No matter how hard I think I have it, I try to remind myself that my husband always has it harder than I ever will.

His salary is comparable to a gas station attendant's.

He's stayed up until 2 am after working a 12-hour day in order to have a phone conversation with me.

He's spending the holidays this year alone, in a small dorm room.

Most importantly, he's putting his life on the line for a country of people who will never meet him.

If he does all this for his country, you can't even imagine what he would do for me.