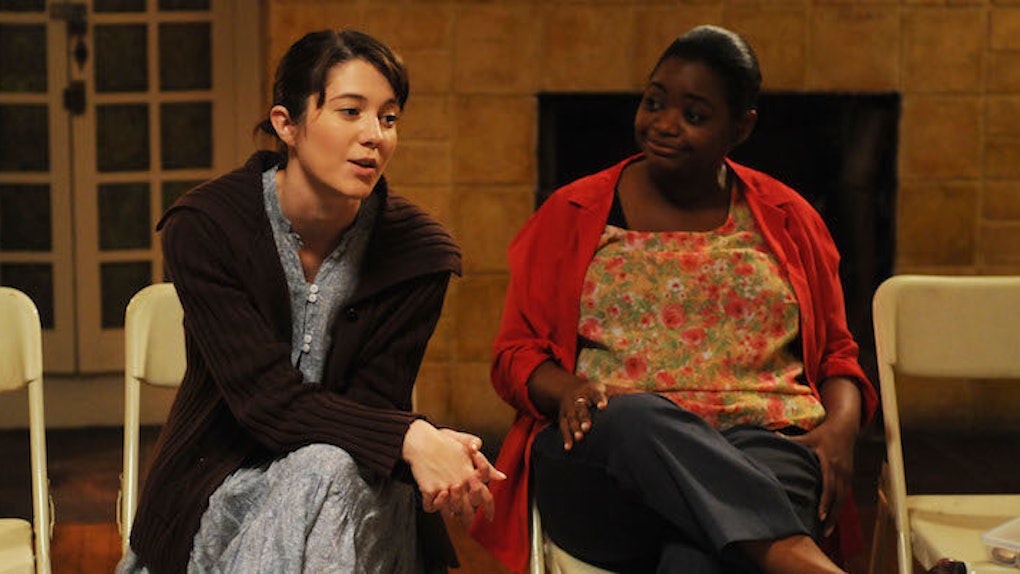 I sat down in a cold, plastic blue chair. I was the last person to join the group of people in the room. There were about 15 people sitting down in a circle with looks of regret and shame across their faces. Yet, we all sat there when we would rather be spending our time doing something else.

We were trapped. We apparently needed to be there for our sanity. The reason was either peer pressure or guilt that we all sat around. We really needed care, or at least I didn't. Two strange men entered the room with messenger bags and a blue book in each of their hands. They were clean cut and looked almost happy. The thought of happiness made me sick.

One had a beard and the other looked younger with blonde hair and a hopeful look on his face. He was probably in his late 20s. They pulled their chairs into the circle and all was quiet as everyone awkwardly adjusted themselves. I clasped my hands together and crossed my feet. I was trying to be as quiet as possible. I stared down at myself.

I did not want to be here. I felt a lump of anxiousness forming in my chest. I sighed and my eyes drifted upward just as the man with the beard began to speak. He asked us to go all around the room and say the traditional introduction: “Hi my name is ____, and I am an alcoholic.”

Everyone was quiet at first. It seemed as if everyone in the room was really shy or nervous. I know I was.

We started to go around. I was about the fifth person in. As it got closer to my turn to speak, I looked up at the people across from me. My heart started to pound and I untied my fingers from one another because I could feel the sweat start to stick my palms together. I couldn't breathe. My head was spinning.

These people were going to judge me. I didn't know them and they were all going to take one look at me and think I was inferior to them. I felt belittled already and I hadn't even introduced myself. I kept my head down. I thought about making an escape, but that wasn't possible. I was panicking on the inside, but I sat there as still as could be. Then the bearded man turned to me and said, “It's your turn.”

I raised my eyes slowly. I cleared my throat. Without hesitation or too much thought, I blurted out, “My name is Haley, and I like to get f*cked up.” My head dropped immediately as I was scared of seeing other people's reactions. I adjusted my placement in the chair a tad as if I was uncomfortable. It felt as if 20 years passed before someone else spoke and I just sat there hating my life.

Everyone in the chorus repeated the lackluster response, “Hi, Haley.” I didn't react. The blurred faces continued to recite their names and all of their voices muffled together in my brain. Why was I here?

When the introductions ended, I felt a little better about life. The young group leader started talking about his issues and the blue book he was holding, encouraging us to all go out and buy it. I knew in that moment, I was never going to purchase that.

He finished his spiel with,“I invite you all to go around the circle again and tell us as much as desire about why you are here. Tell us about your story.” I internally rolled my eyes and thought, here we go again. Awesome.

I tried my best to listen to people's stories. They did drugs, and they drank. They were trying to get better. They need a change. Surprise, surprise. Some people were just here because their family members were alcoholics. Others seemed to have a lot of health and mental issues.

I sat patiently. I wanted to just get up, break the silence, not care and leave. However, deep down, I didn't have the heart or the courage to do any of those things. So I sat. The person before me began to speak. I thought I was going to lose it. I started to get fidgety and began to pick at my unpainted, chipped fingernails leaving a trail of black chips behind me. This was a nervous habit I had since middle school that just stuck.

I reached up and tucked my hair behind my ears on both sides. I thought, "This is it Halez, just tell them. Let it out." The room fell silent and all the eyes shifted toward me. I put my hands on the table and started scooting forward to the edge of the chair.

I told them I drank to get attention from men and how that's the only time I feel truly happy in my life. I told them I didn't like myself sober. I went on and on. I told them all of the details. I spilled it all out on the table, and to this day, I don't know why.

Why would I tell my life story to these strangers? When I was done, I looked at the expressions around the room. I saw concentrated, narrow eyes. I saw empathetic scowls. I saw people. I realized I was just a person, just like them.

A lady sitting next to me put her hand gently on my shoulder and said, “Thank you for sharing, sweetheart.” I nodded slightly and wiggled my way back into my chair. Then the next person began speaking like clockwork. I sat there thinking about what had just happened. I tried to understand what had come over me. This wasn't like me. I had never opened up like that. I don't tell my secrets. I don't tell my stories.

But, I had and there was no going back now. The meeting ended up a prayer that I actually listened to. I closed my eyes tightly, thinking I felt refreshed. I felt like I could breathe. I sat there for a moment as people started to gather their purses and bags, just taking in the moment. My body felt lighter. A slight smirk started to form on my face. I had shared my worst mistakes with these people who were walking out the door, and no one seemed to even care.

When I got up to leave, a guy about my age came over to me and introduced himself as Red. Even though I knew that wasn't his real name from the meeting, I took his hand and shook it. Then he walked off in front of me.

I stopped walking. It was as if I got his approval, as if Red was accepting of me. This confused me. How could people be so open and friendly after hearing my horror story? Maybe my story had a silver lining. Maybe only other people saw it within me. Either way, I survived my first AA meeting. I felt refreshed and I was starting to become myself again.