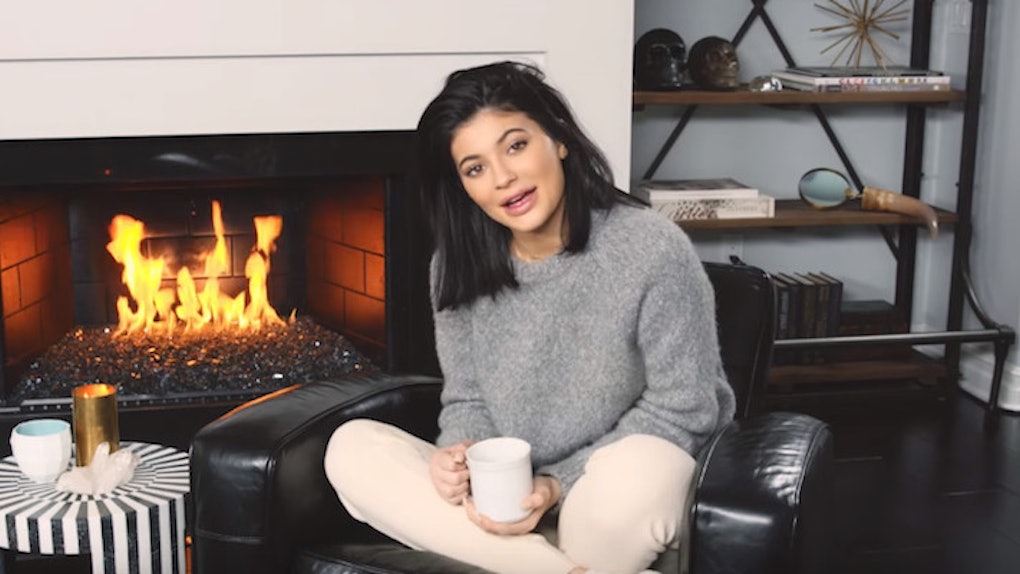 Back in January of this year, Kylie Jenner released a clip on her YouTube channel teasing a video on her app about her resolutions for 2016.

In the 30-second snippet, she said, "I feel like every year has a new energy. And I feel like this year is really about like, the year of just realizing stuff. And everyone around me we're just like realizing things. 2016, looking good."

It was the clip the launched a thousand meme ships, if you will.

Katy Forrester wrote for The Mirror, that Kylie had "now left us in hysterics after posting the most cringe-worthy video talking about her New Year's resolutions."

But few could have predicted how the insane year of 2016 would actually turn out. More specifically, the results of the 2016 United States presidential election.

Everyone thought Kylie was a total, utter, and complete dunce when she said 2016 would be the year of "realizing stuff," but in reality, I have realized more in the past few months watching this election than I have over a large portion of my 25-year lifespan.

I realized about half of this country supports a Trump presidency.

According to CNN's election tally, Trump received 47.1 percent of the popular vote.

He was beat narrowly by Clinton, who had a .8 percent advantage as far as the popular vote is concerned, but he took the electoral college with 290 electoral votes.

It was shocking to discover half this country supports a Trump presidency.

But 47.1 percent is still 60,959,503 votes for a candidate who has openly endorsed racist, anti-LGBTQ+, xenophobic, ableist and misogynistic views throughout this election.

I realized a lot of people didn't know what it felt like to have their voice ignored.

There are plenty of groups of people who are told on a daily basis that someone else knows what's better for them than they themselves do. Men are often called to make choices on women's health issues. White men are often consulted when it comes to the well-being of many different groups of color.

People are often deferred to and asked if certain people should be allowed to marry, to practice their religion freely here in this country, to live their lives authentically, to live... to breathe.

This election showed a lot of people that just because you cast your vote, doesn't mean your voice will be heard and listened to. Sure, you can vote for someone, but it doesn't mean they're going to win.

Over 60 million people voted for Hillary Rodham Clinton, and she isn't president. And if that upsets you, it is up to you to get out into the streets, use your Facebook, use your Twitter, speak to your friends and family, use your platform to make your voice heard.

Donald Trump is our president-elect whether we like it or not.

When the black community didn't feel they were being listened to, people took to the streets to proclaim that black lives did indeed matter. And this is one of many ways to give voice to your feelings of unrest, to raise your voice in protest. Change is not swift or immediate, and Donald Trump is our president-elect whether we like it or not, but that doesn't mean we have to be silenced.

I realized that the illusion of change is very powerful.

A lot less has changed than we think. On November 4, 2008, Barack Hussein Obama became the first elected African American president of the United States of America.

A lot of people read the headlines and said to themselves, "racism is over, now black people have nothing to complain about. A black man is president."

Under Obama's leadership, the Supreme Court ruled that states must recognize same-sex marriage as legal. A lot of people saw this and thought to themselves, "there you go, now the LGBTQ+ community have nothing to complain about."

Change did not come for the victims of the Orlando Pulse Shooting. Change did not come for those who have their hijabs ripped off or their lives threatened for practicing what they believe. But despite the tragedy we saw this year, Obama gave many of us hope tat change was on its way; UPS sent it and that we just had to wait a few more weeks for the delivery.

But the harsh reality we've seen with every headline is that true long-term change is much farther off than we thought.

I realized I have less in common with some people than I thought I did.

I got into a knockdown, drag-out argument the other day with someone I hold near and dear to me. What over? We were two liberal writers who disagreed about how certain information has been framed by the media.

He thought the presentation of certain statistics was being used to spread the knowledge that hate crimes are increasing in "Trump's America," while I feel those statistics are manipulated or purposely framed negatively by people with voices to fear-monger marginalized peoples into clicking their articles.

One of my best friends in the entire world told me they didn't vote because they weren't "a political person," and that just broke my heart. Especially in an election where so many people's lives, their abilities to live freely, to love freely, to have agency over their bodies – all of that was on the line. In a lot of states, every single vote mattered.

It's very possible to know someone who voted for the same candidate as you, and has a large majority of the same values as you, but doesn't fully understand your perspective.

I realized it's actually a lot easier to listen than we convince ourselves it is.

When I have a conversation with someone, it is not that person's responsibility to change their mind. The burden of trying to change someone's mind is on my shoulders as someone who is seeking the change. And in order for me to do that, I have to genuinely listen, as well as speak.

I realized how important it is to practice self-care.

I don't think I ever really appreciated the solitude of my room like I did the first day coming home from work after Trump was named president-elect.

I closed my door, sat on my bed in complete silence and didn't really do anything. It wasn't a numbness, I'd say, but just a pervasive, overarching feeling of nothingness.

I could still feel things, but in that moment, my body decided it might be best for me to not try. I didn't cry. I just sat there for awhile.

And then I ordered delivery from my favorite restaurant, and I nurtured myself. I sat with my roommate and asked him how he was doing after hearing the election results. And I began to feel better by just indulging myself in little things.

For your mental health, surround yourself with love. Allow it to envelope you, and boost you up. Float on that energy. And when you reach the ground again, ready yourself for change -- real change. Because it's coming whether you're ready for it or not.

I realized I have the power to be strong, even when I'm feeling weak.

I filled up the bathtub with scalding hot water, lowering my legs beneath the surface, and sat, allowing my mind to clear itself. Then I slid my entire body under, head included, and held my breath for a second.

I washed my face, looking at my skin, and thought I feel black today. Boldly so. I looked myself in the mirror and saw the whites of the eyes of someone I didn't recognize, but someone I was glad to meet. I saw in myself a scream waiting to be released.

Donald Trump cannot take away my pride for who I am.

But he cannot take away my pride for who I am.

I realized you don't have to love something or someone to embrace it.

Dave Chappelle said something really powerful during his "Saturday Night Live" monologue, something that really resonated with me. "I'm wishing Donald Trump luck," he said, "and I'm going to give him a chance. And we, the historically disenfranchised, demand that he give us on one too."

I never really believed in the sentiment that we can, as a collective community, "Make America Great Again" because for so many disenfranchised, marginalized peoples, this country has never been too kind, or too great.

I am trying to embrace the possibility that those who are upset with the outcome of this election will put pen to paper and voice their opinions, vote in the local elections that matter and speak to their state representatives about their concerns.

I'm ready to embrace the possibility that change is on its way.