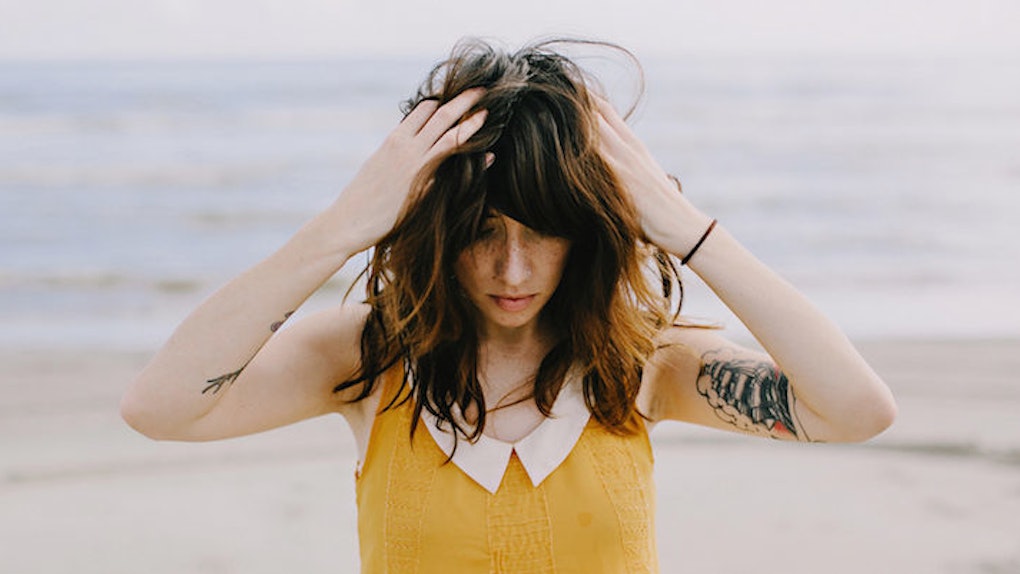 Bad Hair Day? You Have No Idea: What It's Like To Live With Trich

It's a Saturday night. Most 16-year-olds would be out partying or hanging out with friends, but instead, I am lying in my bed pulling out my hair.

I've had trichotillomania (trich for short), a hair-pulling disorder, since I was in the fifth grade. In fact, I still remember how it started.

It was in the fall of my fifth grade year, and I was standing in front of my mirror. I was staring at my eyebrows, and I couldn't stop thinking how bushy they were (even though they really weren't).

So, being my naive self, I started to pull out the hairs, strand by strand, until my eyebrows were sparse.

Days later, my parents took notice of the fact my eyebrows were thinning, and they asked me if I had tweezed them. Embarrassed, I told them no; I had pulled them out.

My parents immediately researched what I was doing to myself. A week or so later, my dad told me others did what I did.

My parents immediately sought help for me, and I started seeing a therapist. Even though I was getting help, I still wasn’t able to stop.

They put me on medication, though I don't remember which one. Over the course of treating my trich, I've taken Prozac (which gave me a tremor), Lexapro, Concerta, Zoloft and NAC.

During fifth grade, I went to a trich support group. I met other kids with trich, even though there were only about four of us, and all of them pulled out their hair from their heads.

I considered myself one of the lucky ones because I didn’t pull from there, as it seemed even worse than pulling from your eyebrows.

For the rest of my fifth grade year, I continued to pull out my eyebrows. But that all changed when I started sixth grade.

I no longer called myself one of the lucky ones because around September, I started pulling from my head. All I remember is I stopped pulling my eyebrows and started attacking my hair, not being able to leave it alone for just even a few minutes.

My signature curls started to disappear until the majority of my head was bald.

Over winter break, my parents and I made the tough decision to shave my head.

I remember it pretty well, actually. I sat on the side of my parent’s bathtub as my dad took some scissors and started to cut my hair. I watched my long, leftover locks fall down onto the tile floor. My dad just kept reassuring me my hair would look better.

Hats soon became my new best friend. My nana bought me a variety of different ones (even a pink sparkly one) to cover my head.

I was still embarrassed and ashamed, though, and I held onto this secret behind my disguise.

Soon, it was time to return back to school. I was nervous what everyone would think, especially since I wasn’t allowed to wear a hat.

The second I walked down the hallway, everyone turned and stared at me. It’s not every day you see a bald sixth grade girl.

Before the bell even rang, my beloved guidance counselor pulled me into her office and asked what happened (she knew about my trich).

I told her everything, and she asked me if it would be okay if she told my grade during their PE periods about what happened, so they would leave me alone.

I very willingly agreed, and no one mentioned my lack of hair to me again.

That was, until that afternoon, when a seventh grade boy asked me if it was a dare to shave my head. I was so embarrassed, and I simply just shook my head and ran away.

Shortly after, my dad heard about the Hair Club for Kids, which gives children under 18 who are suffering from hair loss free hairpieces and wigs.

My mom didn’t want me to get a wig at first, but after she saw how happy it would make me, she gave in.

When I got fitted at the Hair Club, my parents and I both knew we had made the right decision to trust them. They didn’t judge me and treated me like any other 12-year-old girl, and for that I was grateful.

It took about six weeks for my wig to come in, and when it did, I was beyond ecstatic. The first thing I did after it was glued on was braid it; I had missed doing that so much. I finally felt normal.

The next day at school, I sauntered down the halls confidently. Everyone just stared and complimented me the whole day, and it felt amazing.

I believe my happiness was contagious, and people were happy for me.

There were still some tricky parts, though. I couldn’t do certain hairstyles, such as a high, messy bun, because it would show the wig glue.

I had to be careful changing shirts, and it required extra care in the shower. I was allowed to swim in the wig, though, which was great (especially since Atlanta summers are brutal).

I didn’t pull from the wig for the first two weeks after I got it.

But then, I relapsed, and I started pulling from the wig.

For me, it’s not so much the feeling left on my scalp after a hair has been pulled; it’s more about the feeling of pulling something out of something else.

And I believe that is why I still pulled from the wig.

In April of sixth grade, I attended my first TLC Conference. TLC stands for the Trichotillomania Learning Center, and it saved me.

TLC is a non-profit organization dedicated to helping those who suffer from BFRBs (body focused repetitive behaviors). They host a national conference every year, and hundreds of people come from all over the world to be with others just like them for a weekend.

For some, it is their first time meeting someone with trichotillomania in-person.

I have attended the conference every year since then, and I have made some amazing friends along the way. At the 2015 conference, I actually got to give the opening speech, which was an amazing feeling.

I am also a member of the TLC Millennial Task Force, which is a group of eight young women who are helping TLC create and implement new campaigns and programs to help raise awareness of BFRBs.

We have done a lot of stuff for school and college outreach, and we have even created a BFRB advice column, Trichs n Picks.

In seventh grade, I was still wearing the wig. I also started pulling my eyebrows again, too.

In the springtime, I relapsed and pulled out every single one of my eyebrow hairs. I called my parents, crying and ashamed, and they had to rush home from my sister’s soccer game to be with me.

I was so embarrassed, I even asked them if I could draw in my eyebrows with Crayola marker for school the next day.

I didn’t want anyone to see me like this; I didn’t even want to see myself like this. When I went to school the next day, no one said anything. I guess everyone was just used to it.

To this day, I hate seeing pictures of what I looked like without eyebrows. It’s just painful to look at.

I look happy on the outside, but on the inside, I was utterly embarrassed by how I looked.

It was in eighth grade I decided to stop wearing my wig. My curls were hanging out from underneath my wig, and I decided my natural hair was long enough to wear down in public.

I was so excited to finally not be wearing the wig; I could do whatever I wanted with my hair!

It was still short, but I was just happy to have my curls back. That same year, I also found out about eyebrow makeup, which has been my savior.

So many people who suffer from BFRBs live in shame and embarrassment; some sufferers' parents refuse to believe it’s an actual disorder.

For me, though, I’m lucky to have such an amazing support team: my doctors, friends, trich family and most importantly, my family.

My parents have spent thousands of dollars for my treatment, which I will forever be grateful for. My mom has even attended every TLC Conference with me.

Without my parents, I definitely would not be where I am today, receiving medication, going to doctors and attending the various conferences.

It actually turned out that some of the girls in the audience have trich, or knew people who had it. Hopefully, that helped them realize it’s not all that “rare.”

If I could say one thing, it’s that you don’t know how badly I miss wearing my hair down.

I wear it up in a bun every day to hide bald spots, and I just want to show off my natural curls. So, to all the girls who think they’re having a bad hair day, you have no idea.

It still bothers me when people use expressions such as, “I’m so stressed, I could pull my hair out!” and it always will.

Even if people do know about trich, sometimes they just can’t help but use that expression since it’s normal and used so frequently.

Until people realize that BFRBs are an actual thing, we will continue to use that phrase. And I’m trying to change that.

I know I’m only 16 years old, but I hope to make a difference and inspire others to speak out about BFRBs. The only way we are going to break down these barriers is through awareness.

Whether it’s sharing this article or telling your best friend about BFRBs, we can overcome the stigma. If I can, you can, too.