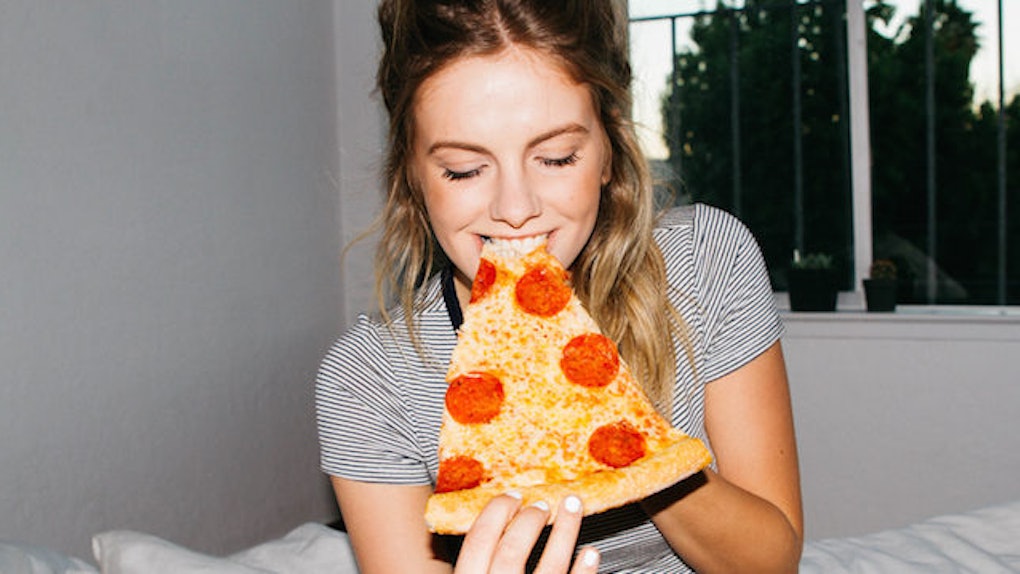 How You Eat Pizza Reveals Aspects Of Your Personality

When I say pizza is my favorite food group — I kid you not — it most certainly is.

Anything pizza-related is serious business to this carb-loving gal. And living in The City That Never Sleeps, I'm surrounded by some of the best pies ever, which can get quite dangerous.

I'm so in love with 'za to the point where I made my very own personalized chart, which has an entire food group dedicated to the cheesy-tomato-saucy goodness.

NGL, it's low-key framed on my wall.

Many of us can agree pizza's God-like status deserves to be bowed down to.

Life without it would be depressing AF — especially when you're craving late night drunchies and French fries just won't get the job done like an OG cheese pizza would.

But I digress. When it comes down to it, pizza's the real MVP.

For all of my fellow 'za lovers, there's actually research that suggests how you eat pizza can tell a lot about your personality.

Wood then studied how people take on simple tasks and organized them into four different categories.

There are four distinct personality types—drivers, influencers, supporters and careful correctors—who tend to have very unique ways of doing things, even small tasks.

Cosmo took this research a step further and correlated it to how people eat pizza.

The folders, also known as the “drivers” of the world know how to get shit done while they're savoring their pizza.

"Drivers” do not kick back and relax while enjoying all their slice of pizza has to offer them, because they're multi-tasking in the process. They want to finish that slice as quickly as possible like a boss machine.

TBH, I've never met anyone in my life who casually eats the crust first. Now if it was filled with cheese, then we're talking! Crust lovers are “influencers.” These kinds of people are trendsetters and don't like to follow the typical crowd.

People who use a knife and fork to eat their pizza are described as “supporters.”

They are thoughtful enough to take one for the team and let everyone else at the table take their slice of pizza first. “Supporters” live for routine and stability.

4. Take that slice of pizza and bite it.

Picking up that slice of pizza and taking a bite without any strings attached is so gratifying. The “careful correctors” go for it and take that bite like it's their job.

BUT, when it comes down to pizza flavors and toppings, “careful correctors” are known to be complete perfectionists and do not mess around… they look for the cream of the crop. "Careful correctors" are not big fans of messy situations (a messy pizza eater will not do).

It's kind of wild to think that the way you eat pizza can reveal so much about your personality. I'm a major advocate myself of going for that slice and straight-up biting it, and there's nothing I love more than exploring unique pizza flavors.

You can always count on this gal to hardcore search it up on Instagram to scout out the ultimate 'za joints to hit up with the crew.

Whether you're all about folding, crust first, that knife and fork, or the bite, it's clear all of these people take time out of their day to chow down some pizza... and that's all that really matters in my book.

Citations: The way you eat pizza can give clues about your personality (Fox News), The Way You Eat Pizza Could Be Saying a Ton About You (Cosmopolitan)