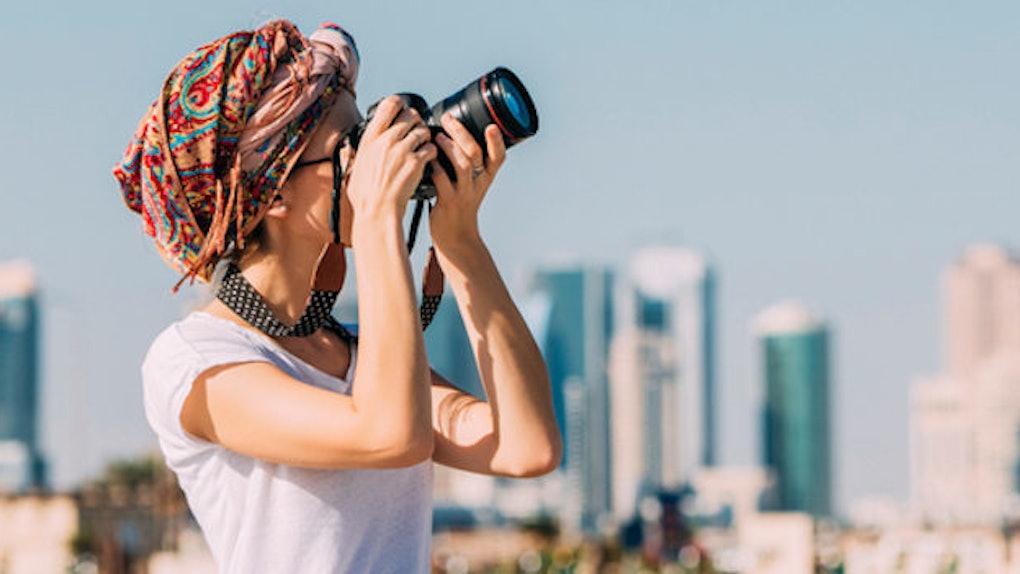 It hit me while I was waiting at the arrivals gate at O'Hare. My suitcase with the broken wheel was parked next to me, and my arms were folded as I stood in the middle of the throng, glowering as I was looking for my dad. All sorts of people were around me, skirting around my banged up carry-on to throw themselves into hugs, some holding balloons, some ready with open arms, most of them with smiles they couldn't control as “hello” finally replaced their “goodbye.”

And all I could think about was how I had dirty shoes.

I had dirty, dusty, rough-looking boots. I scuffed the toe across the floor as I stared at them. They looked so out of place. They walked the narrow cobblestone streets of Spain, propped themselves on the fold out chairs of Prague's cafes, stubbornly tromped through puddles in Scotland's highlands and were champs on sticky dance floors in Eastern Europe.

And it was all going to be buffed and polished away in a few day's time.

I was back home.

Just then my dad made his way through the crowd, smiling and waving excitedly, rushing over to grab the handle of my suitcase. And in that moment, I felt pure panic. Seizing up, I looked around wildly, thinking how it wasn't too late to just bolt the other way and buy a standby ticket out of here. To anywhere. Just out. It wasn't too late.

Ignoring the manic look in my eye, he picked me up in a big bear hug and dropped us into the usual airport shpiel. “Hi,” he said. “Mhm,” I answered, keeping the gulp in.

My trip was officially over. And these are all the feels I felt as my passport was taken out of my wallet for the last time.

But dismay was what I felt when I walked into my house for the first time in six months. My brother hung a welcome home sign in the living room that said “hey” in small letters in the middle of a large poster board, but other than that everything else was the same. My mom began talking about the grocery coupons she found in the newspaper, my friends texted me asking about brunch that Sunday like I hadn't been gone for half a year, and I immediately turned on "The Simpsons" when I plopped down on the couch, quietly echoing Homer's “d'oh”s as I sat there darkly.

It was like I never left at all. I was back in Suburbia USA. The rest was behind me.

2. You Feel Changed, But No One Will Let You Be

My favorite part of arriving in a hostel was that moment when I struggled through the dorm door, wrestling my suitcase in as I threw out a distracted "hi" to those hanging off of top bunks and sitting criss-cross on the floor. And as I parked my luggage by the foot of my bed and began to unwind my scarf, the questions would come: How long have you been traveling? What did you see? Did you try the hot chocolate in Madrid? I made out with that same guy in Berlin!

And before you even got your shoes off you'd be talking about the people you've met, the way you felt eating a corn beef sandwich on a wall with more centuries than you have fingers, and how getting your cigarettes pick-pocketed in Prague changed you.

But back at home? No one wants to hear what you were doing while they were stuck at work filing. Everyone saw your Instagram photos, your stories feel more braggy than personal and you get neatly boxed back into the old outline of the person you were before you bought your ticket out.

3. Which Leads You To Be Unsure If You Even Changed At All

David Mitchell said, “Travel far enough, you meet yourself.” I think the reason for that is when you leave your zip code, there's no one around to report back on you. So you stop closing yourself off. You don't want to be cool or indifferent anymore; you want to be honest. You become open and curious, brave in a way that sometimes baffles you and interested in who people are.

You'd cook dinners with strangers in your hostel, chopping garlic for sauce as you listened to what roads they took those past months to get them to that kitchen. In Barcelona, you'd go up to rooftops and drink wine with a friend you've known an hour but now have as a brother. In Hanoi, you'd sit on a curb with a stranger, learning how to roll cigarettes as your knees bump. In Bangkok you'd have a bucket of alcohol in one hand, a roasted cricket in the other, laughing as you walked beneath dizzying neon lights. You wanted to meet people, connect, exchange ideas. You wanted to push yourself, try scary things, see what you could accomplish on your own.

But when you're back home, you feel the old you waiting. She's sitting with criss-crossed legs on the bed, smirking. Like she already knows that after a handful of days you'll go back to your self-conscious, hesitant, unsteady, no-new-friends self. And as you sit down next to her, you don't know which version of you is right.

4. You Experience The Disappointment That Is Your Morning

On the road, you have these five seconds every morning just as you open your eyes — right before the need for coffee hits — where you think the following: Am I in Paris? No wait, Amsterdam. Or is it Sri Lanka? My shirt isn't sticking to my chest, so — oh yeah, it's Brussels. Today is Brussels.

When you're back at home, for the first couple of days you'll have that same wonderful disorientation, and when the realization hits that it's your own room, in your now-seemingly dust bowl of a town, you'll put the pillow over your head and do your most impressive internal scream.

Coming back home felt like putting on a favorite sweater that shrunk in the wash. It just didn't fit right anymore. I've had the same squad since Kindergarten, swapping PB&J sandwiches with the same people for two decades now. I thought what I needed to be happy was stability, and that history is what kept me firmly rooted in my neighborhood, venturing out only when vacation days became available.

But those roots don't seem as important anymore. I've learned those who want to keep you around will wait. Feelings won't change, your past won't be wiped away. You don't have to stick around just to preserve that. Leaving doesn't mean choosing. So now I'm looking for my next ticket out because home is no longer this zip code or these people that I've been kicking it with my whole life. Home is an unfamiliar bed in a country where I fumble over the world “hello,” and where a map is always stuck in my back pocket. And I feel homesick.

Taking the leap to leave everything familiar behind is a selfish thing, and the experience rubs off on you. You've missed birthdays and road trips, ignored phone calls and pushed deadlines, smiled at "I miss you" messages while knowing you'd keep them feeling that way a little longer.

And the decision settled you. That feeling is hard to shake. So you're now ready to be selfish with your time. You stay home on Saturday nights eating donuts if that's what you want, or you wind up in a whiskey bar during a school night. You cross the street in order to avoid talking to somebody and say the word “no” without the need to explain why. You love those you love, and feel OK if the feelings leave. You don't wait anymore for people to give you permission to live. You'll drive two hours for the ocean, and you'll take a long train just to go sit in a small park in the city. You could have your shit together or you could not, but in the end you know it's your choice. And you don't feel guilty about it anymore.

7. It's Hard To Express Your Feelings Without Looking Like An Ass

A week in, I had a moment where I went stir-crazy at a brewery I was at with my friend, and slamming my lager down on the wooden table, I shared how frustrated I felt being back. How restless and unrelatable I felt. How the growth I worked so hard for while figuring out bus routes and maneuvering hostel dorms was turning stale now that I was back. And she smiled somewhat vaguely and suggested, “Just take another vacation, I guess.”

To which I picked my beer back up and drank silently. It might sound bloated, but the travel bug is more than just wanting to lie in hammocks and take pictures of you drinking espresso in Italy, or bundling up in peacoats in front of Parisian cafes. Instead, it's like a fire. You're curious and you're open and you want people and places to affect you. To change you and teach you. But when you say it out loud, words kind of fall ... flat. They sound somewhat cringe-y, like a Pinterest quote in front of a mountain range tinted pink. And you're not sure how to save that side of you that opened up while you were away.

In Madrid I would wake up and take my work to a cafe tucked between a deli and a sandwich shop, dipping churros into hot chocolate as I clocked in my hours. If that scene didn't suit me anymore, I'd buy a ticket to France and instead nervously order pastries in broken French at the register, taking pain au chocolat to my table. I would stay a month in a small Polish village because it suited me and then fly to London to get some fish and chips because it was Wednesday and why not. But now? I'm dealing with this new itchy lack of freedom. I'm sitting on my hands, shuffling myself between Starbucks and my kitchen table, spending my evenings with "Frasier" reruns and thinking about how I should really scrub the shower sometime soon.

And the thing is I know I could easily do the same here. I could just fly down to New Orleans or drive down to Nashville and chase that feeling down. But it's a different issue. It's more that you're dealing with the idea that maybe home isn't home after all, and you don't quite  know what to do with that.

It might pass, or it might not, but one thing is for sure: When you come back from a long-term trip, you'll realize just how much you can change if you let yourself.