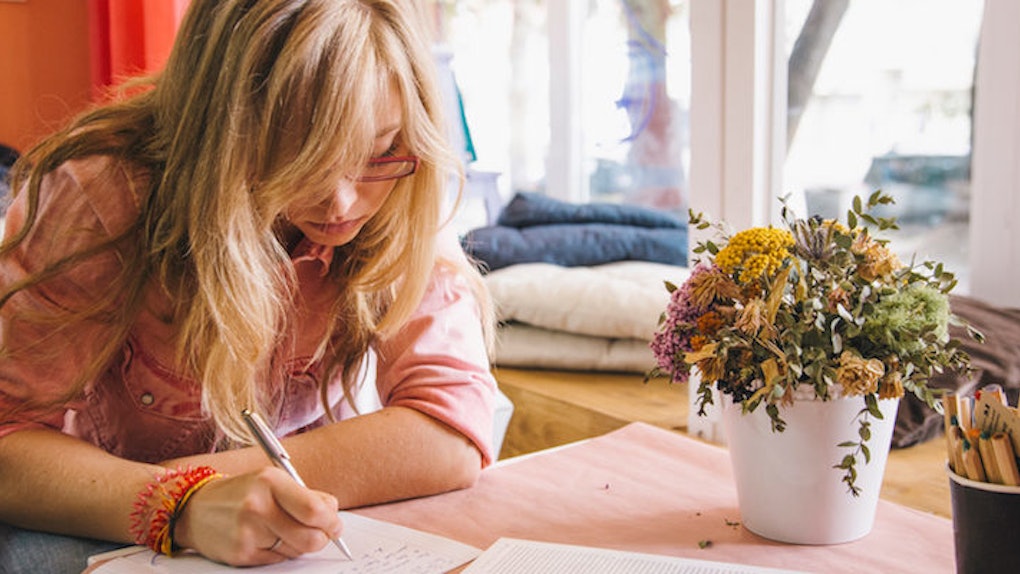 Back in the days of Myspace, AIM and T9 texting, I was a socially awkward high school student with less than 10 screen names on my buddy list -- an embarrassingly low amount for a teenage girl in the age of rising technology.

Social anxiety plagued me for most of my life, making me terrified of talking to people. Needless to say, I was never considered cool, or popular, in the least bit. However, the little social interaction I did get ended up being way more beneficial to me than a date with the hottest guy in school ever could have been.

In high school, I tried so hard to put out the vibe that I was super ~chill~ about life, and for the most part, I was successful in that. Acquaintances would often call me blasé, or comment on my severe case of "Resting Bitch Face," believing that I truly was the most laid back person ever.

They couldn't have been further from the truth. I was constantly overanalyzing everything, from the glances in my direction in the hallway to the feedback teachers gave me on assignments (she said this is a fragment which must mean I'm a terrible person).

I was constantly worried about peoples' perceptions of me, so I was very cautious in my own endeavors.

I didn't let myself try out for cheerleading, even though I was obsessed with the sport, lest one of the popular girls on the squad deem me a poser. I also went out of my way to avoid people I had been friendly with the previous school year, on the off chance that they wouldn't remember me, potentially causing an awkward confrontation.

I tried very hard to not bring any kind of attention to myself so I could get through high school without incident, good or bad.

These fears obviously hindered my ability to talk to my peers, or make friends,  but I didn't think I had much to offer a large group of people anyway. I was usually too shy to contribute to conversations, so I wasn't very interesting personality-wise and I wasn't as pretty as the other girls to whom I compared myself.

So, I did nothing. I didn't participate in extracurriculars, I kept quiet in class discussions and while all the cool kids were out on Friday nights partying, causing unplanned pregnancies and getting premature wrinkles from smoking too much, I was home.

My Friday nights usually consisted of me watching Sponge Bob and Zoey 101 -- despite probably being well outside the shows' target age demographic -- and being in bed, ready to sleep, by 9 pm.

I generally tried to be invisible in all aspects of school. I could say with confidence that the majority of my classmates would have no recollection of me at all at our 10-year reunion.

However, throughout my days of blending into the background, I somehow managed to snag a core group of friends. So, on occasion, I wasn't completely alone outside of school hours. As I grew closer to these people, I saw that they didn't judge me or make fun of me.

I was able to open up to them, and this eventually led to me developing a pretty amusing, and likable personality, if I do say so myself. Yet, I still couldn't bring myself to act like myself around people I didn't already know well.

It wasn't until college, when I started drinking, that I started getting over my anxiety and insecurities. Alcohol lowered my inhibitions enough for me to be silly around strangers. Then, when we sobered up, I saw no reason to be shy, since I had proof that I could be myself and not be laughed at.

This is when I truly blossomed.

Instead of continuing to judge myself against the people around me, I focused on accepting my qualities, quirky as they may be, and my unique outer beauty. Since I had already honed my personality with my close friends back in high school, it was easy to finally become the enjoyable person to be around I was always meant to be.

If I had this self-assurance in high school, I definitely wouldn't be the well-rounded person I am today.

If I had been outgoing and easily able to make friends I would've rested on those laurels, and basked in the glow of popularity, rather than trying to grow intellectually and reaching a potential I never thought I could achieve.

I'm happy that I can honestly now say that I genuinely like who I am as a person, and don't care what people think of me. So no, I wasn't “cool” in high school, but there's nothing I'm more thankful for now than the fact that I didn't peak when I was 17.