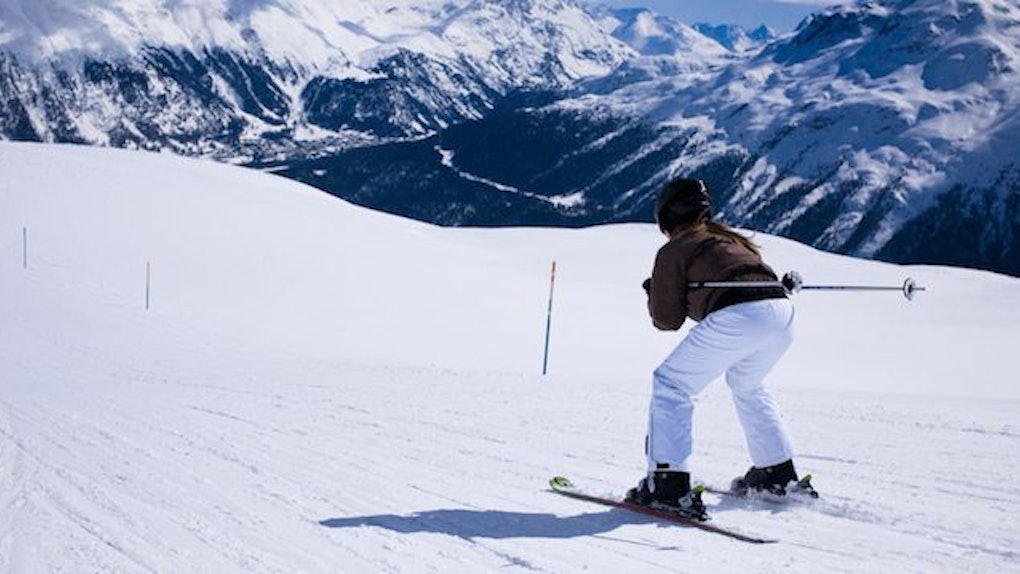 Skiiers Are Healthier and Happier Than Those In The Lodge

If you're looking for a solid mood boost this winter, why not take it to the slopes with the crew?

I'm a tad biased because I absolutely love to ski, and I've been turning it up on the slopes since, basically forever.

In the summer this chick is a hardcore beach bum with her booty parked in the sand on a daily basis, and in the winter I transform into a total ski bunny (literally though, all-white ski apparel and all). I pretty much blend in with the mountain itself, but #YOLO.

My neighbors and I headed to a cottage in Vermont every winter when I was younger. We would ski (and eat amazing waffles at the mountain lodge) by day, and go snow tubing by night.

Essentially, we could always count on the mountain and skiing to bring us together for an epic time.

It brought me so much happiness, and when the vacation sadly came to a close, I longed for the time when we would pack up the cars again with our skis and one too many pairs of UGG boots.

Once ski season hits, there's honestly nothing that compares to cruising down the mountain shredding up the fresh powder.

The feeling is such a rush, and I can't help but smile when I'm French frying it.

For those of you who aren't familiar with the term “French fry” (and no, I'm not referring to the insanely delicious fast food favorite), it's positioning your skis parallel so that they look like two French fries chilling side by side.

And “pizza” is the term used for when you turn your skis into a wedge position to stop.

All of this yummy food talk is making me super hungry RN, but I digress.

According to Medical Daily, there's awesome news for ski lovers everywhere… and it will leave you longing to take a trip to the nearest mountain with your gear.

Your happiness level is through the roof.

A study in a journal called Applied Research in Quality of Life surveyed 279 people who are passionate about skiing, snowboarding, or both. The group of Korean researchers selected the participants from three ski resorts in South Korea.

Ultimately, the team was set out to measure the participants' levels of satisfaction and happiness.

The researchers discovered skiers who made skiing their top priority, and put pretty much everything else in their life on hold while on the mountain prospered the most from the sport.

Adult playfulness can influence people's happiness, while activities and socially convening around a sporting activity, such as skiing, have positive psychological outcomes and contribute to overall well-being.

It's also interesting to note skiers expressed higher levels of involvement and happiness than… wait for it… snowboarders.

Skiing is an intense workout, especially if you haven't been to the mountain in a while. You'll totally feel the effect it has on your body the next day.

Even though you may wake up a bit sore, it's your body telling you that your muscles worked damn hard, got the job done, and you most likely had a prime time skiing the whole day away.

Think about it… you're working your legs and moving your arms with your ski poles. It's a full-body workout.

Along with making your bones and joints stronger, you'll be burning off those brunch calories in no time. Your core strength and balance will flourish.

All of this epic science proves why you should hit up a mountain with your skis ASAP.