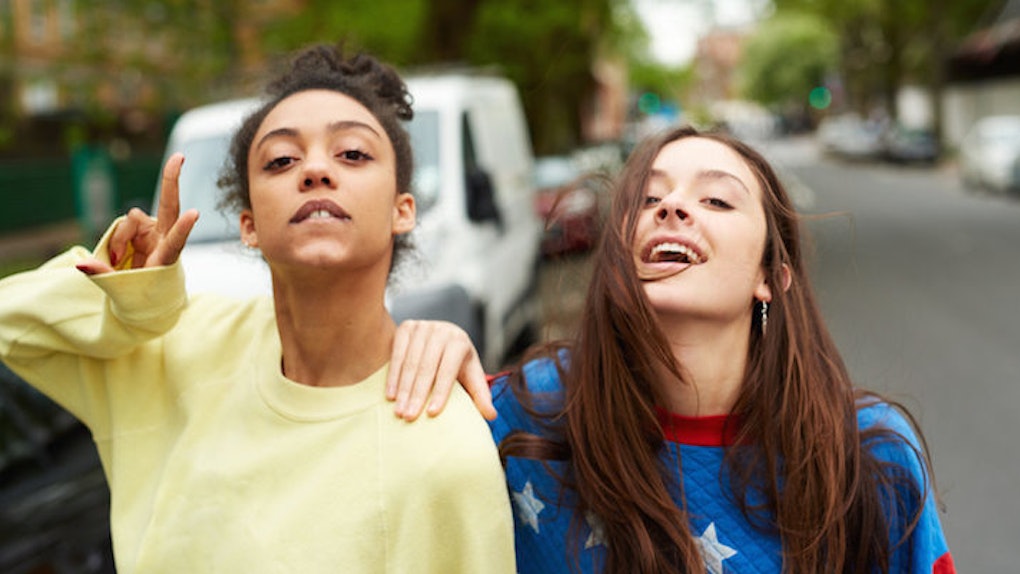 Why A Good Friendship Will Always Beat A Good Marriage

Since when did marriage warrant an announcement? Since when did people get praise for partnering up? Why the hell is everyone so happy for people who have known each other for a few years, when there are friendships out there that have lasted well over decades?

And don't try to tell me friendships aren't about love and commitment.

You’re actually totally in love with your best friend. I hate to break it to you, but you’ll probably love your best friend a long time before you truly love anyone else. Most marriages don’t have as strong a bond or longevity as the relationship with your friendship. Because this love is real -- it’s not just attachment love.

It evokes empathy and reliance. When your best friend comes to your mind, you experience psychological effects.

Huffington Post reported on a study in which participants stood at the top of a hill, either alone or next to a friend. When asked to estimate how steep it was, the participants with a friend alongside them all thought the hill was less steep.

Of those standing alone, some were asked to think of their friends. The ones who brought friends to mind also thought the hill was less steep.

Psychology Today references William Deresiewicz’s essay, “The Chronicle of Higher Education,” which reveals that, in ancient times, friendship “was seen as superior to marriage.”

With our culture’s obsession of all things marriage (even though you’d think we’d be a little more cautious given our culture’s divorce rate statistics), friendship loses the prestige it deserves.

Deresiewicz’s essay goes on to emphasize the importance of the modern day friendship and how its role has increased in the 21st century. The points are made in reference to 21st century values but also parallel with the restrictions of matrimony.

Not to be a total cliché, but there's some wisdom in “Sex and the City” and Charlotte York's quote: “Maybe we can be each other’s soulmates, and guys can just be these people to have fun with.” This isn't far from a revolutionary thought.

Friendships are the stable relationships, the ones without divorce rates, split assets and lawyer fees. So if you feel like you're never going to get married but have solid friendships, you really are better off.

Friendships, unlike marriage, are equal

Romantic relationships are always tug and pull. No matter how close you and your partner are, there’s always a fear that you love him or her more.

With friendships, there’s an equality that doesn’t exist in romance. You’re never scared your best friend will leave you for someone else or your flaws will turn him or her off. It’s a bond that doesn’t have weights.

You’re not defined by your friendship

Marriage brings labels, and labels bring boxes. You’re a wife or a husband. With those boxes come stigmas and associations. There’s a bunch of restrictions, assumptions and duties that come with being a spouse.

In a friendship, you’re just you. You are a unique individual with nothing and no one defining your life.

Friendships are a reflection of ourselves, not someone else

You can really judge a person by his or her friends. You can’t say the same about a spouse because there are too many underlying factors. Romance, sex and physical attraction are things we can’t necessary help or explain to outsiders.

With our friends, however, we’ve chosen them based on our own personality, and that says a lot. Out of all the people we’ve come in contact with, they are the ones we get along with best.

There are no commitments, obligations or legalities to a friendship

Yes, we have commitments and duties as friends, but nothing like the binding agreements that come with marriage. There’s no legal paperwork or shared assets. That freedom to be yourself while also having someone by your side is unique only to friendships.

In marriage, if you don’t want to see your spouse for a few days, there’s an issue. With friends, there’s never a problem.

Marriage entails constant explanation and decision. Things are done as a pair, with your independent decisions suddenly dependent on someone else.

In friendship, it’s all about support. When you buy an expensive new bed set, all your best friend can do is admire it.

While marriages obviously evolve and change over the years, there is less freedom and unlimited opportunity as there is in a good friendship.

There’s no one to consult when making a big move, no one to appease when taking time off, and no one to discuss with when making a life change. They are just there, always behind you, always supporting you.

Marriages, of course, are supportive, but they are also full of liability. Any decision you make is no longer just yours. You are part of a team, and that can sometimes take away from the individual success.