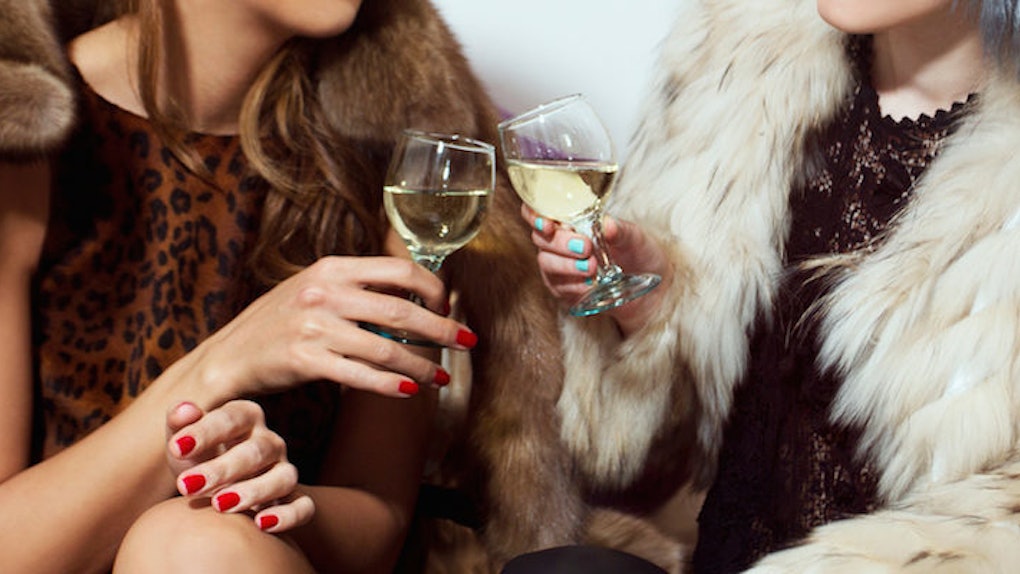 By the time you hit 25, you're probably already familiar with all the seemingly innocuous questions about your relationship status, career prospects and plans to reproduce that your relatives drop on you at family parties. Maybe your mom saw some high school friend of yours walking around the grocery store with a Titanic-sized rock on her finger and a protruding baby bump, and she suddenly can't stop asking you when you're going to have lunch with her next.

Maybe your older brother who used to let you borrow his ID to get into bars is suddenly blowing up your calendar with appointments with “connections” of his who could land you “sweet positions” that you're not even remotely qualified for, and the prospect of taking them makes you want to die inside.

There seems to be this unwritten rule that once you hit your mid-20s, it's time to get a real job, pick the last person you'll ever have sex with, sign a mortgage, start popping out annoying miniature versions of yourself and spend your weekends going to the actual zoo instead of the unofficial frat house full of the animals you call friends. At 25, if you're still earning under $50,000 a year, spending what little you have on beer instead of the rent for the sh*tty apartment you still share with your college lacrosse teammates, and you are “casually dating” three different people who have a variety of commitment issues, you're going to suddenly find yourself under a lot of pressure. You're suddenly on the receiving end of a lot of uninvited suggestions for blind dates and career opportunities, as well as more than a few pity-filled pats on the back.

This seemingly inevitable phenomenon gets talked about and written about often enough, and most of those articles end by telling you it'll be OK, you'll get there and you're just a late bloomer. The rest of them tell you you'll be better off when you get there because you will have had more time to “discover who you are.” F*ck those articles.

What those articles usually don't talk about is the other inevitable phenomenon that starts right around the time you hit 27. Usually, this second-wave phenomenon starts within the few moments after you realize a bunch of pictures you were tagged in on Facebook have been taken down because someone got divorced and removed her wedding photo album. Then maybe, you attend a friend's child's birthday party and realize that your once-rowdy and jovial pal's smile looks weird because it's fake, and he's actually dead inside.

When all this starts happening, you start to realize something very, very important. Sure, you don't have best paying job in the world. Maybe you're still undecided about going for your master's degree, and maybe the guy you're having fantastic sex with will never be more than a surf instructor with the IQ of a trout.

Perhaps it's true that you woke up last Saturday at 2 pm under your living room rug with your pants on backwards, a penis drawn onto your forehead and the number of some woman named “JhwUleee” recently added to your contacts list. Yes, you still have trouble figuring out your taxes every year, but at least you aren't trying to do them when you're trying to sort out a divorce.

At least you aren't responsible for a mess of kids who you secretly resent because you feel they've sucked all the fun out of your life too early, and at least you don't have to deal with hating yourself for feeling that way. At least you aren't tied to a desk 12 hours a day at a job you hate, but you can't leave it because you have a mortgage that you'll be paying off until you're dead.

You may look like a mess from the outside. People may be calling you immature and juvenile, and they may be telling you to get your sh*t together for the rest of your life. Ignore them. Ignore them because no matter what it might look like to them, you're happy and you're free.

If dancing on top of bars all night and going home with strangers is what makes you happy, do it. Don't stop doing it until the moment it stops making you happy, even if you're already in your late 30s instead of late 20s.

Those other articles are right in one sense. At some point in your life, you will figure out who you really are. But they are wrong to assume that who you really are is absolutely going to fit into the “stable job, marriage and kids” mold. Who you really are just might be the person you are right now: unattached, wild and wholly irresponsible with what little money you have.

But as long as you are enjoying your life and you are happy, then you are a thousand times better off than the people who “have their sh*t together,” but are actually miserable about it. That's because happiness is the most valuable thing in life, and it's not the same for everyone.

So, to the 40-year-old passed out on the stage at the club every weekend and going home with college students on the regular: I salute you. You do you.