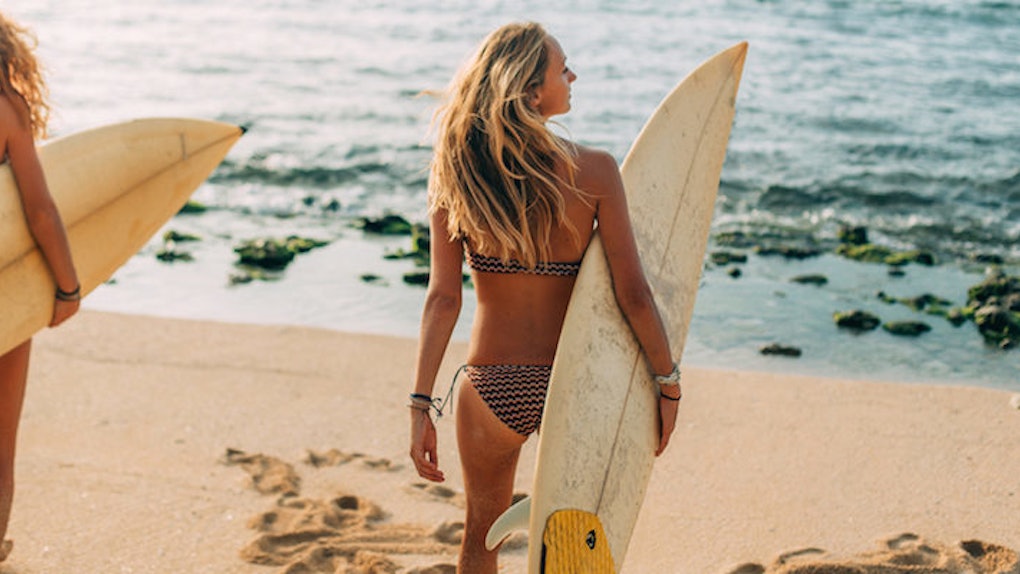 Living in Nicaragua with nothing but a couple of backpacks and my pup has been a wild ride, to say the least. I've picked up a couple of new skills along the way, with the main ones being Spanish and surfing.

I've fallen in love with the Spanish expressions that express facets of life that only come about in places like Nicaragua. "No hay," for example, basically means that whatever you're asking about — Internet, water or small bills for change — simply isn't available at that moment, and you can check back later. I've also fallen in love with the beauty that is surfing in the rain at 5 am.

One of the things I've grown to love about learning this new sport later in life is the coterie of bad bitches I've met in the water. I've been lucky enough to get to know my amazing Nicaraguan friend who gets her spiritual charge and serenity from the sea; the unbelievably kind Canadian woman who taught me to read waves and let me, the little beginner, catch all the good ones as they rolled through; and the chicas who are always stoked to hop in the water alongside me.

There's some seriously killer dudes out there, too. A particular friend of mine is great to surf with because he treats me like I should always be doing better. He motivates me to believe I should be getting on waves, and he cheers me on when I catch ones we can ride together.

The water is, of course, filled with plenty of other amazing men. However, one thing I've noticed as I've learned to surf is the pervasiveness of thinly veiled gendered and sexist comments I get from men, which usually fall into two categories: my athletic ability, or my board.

When it comes to my board, every man I encounter has a voiced his opinion about how incorrect it is for me. Guys say it's "too short," "too wide" or "too long." They also note it's "made for too big of waves," and it "needs to be cared for better." While I'm certainly not — and never will be — a surf pro, I still possess the ability to learn about and understand what constitutes the board I want to be surfing on.

I can't help but think about Rebecca Solnit's article, "Men Explain Things To Me," every single time I encounter one of these comments. Thanks, guys, for explaining to me what kind of board I should be surfing on, even though you've never even been surfing with me. I've been surfing right alongside myself every day since I took up the sport, and believe it or not, I feel pretty equipped to make decisions for myself.

When it comes to my ability, almost every man I've met in the water comes at me with the same offer: "Here, I'll push you into a wave." It's funny because I have yet to be offered that by a woman, and I never see guys pushing men they just met into waves.

I'm not an idiot. I see the dating strategy there. But, the thing that gets under my skin is the underlying assumption that I'm just out there to splash around in the water, and I have no actual desire to learn to surf. Because obviously, no woman can learn anything about reading waves, positioning, paddling or any other essential surf component without some guy asking her if she wants to be pushed into a wave.

Even though something about it seemed off from the very beginning, when a man first offered this to me, I didn't not say, "no." I wanted to know if there was anything wrong about my technique, and I didn't know if that actually was the way people learned how to surf. I also didn't want to come off as anything besides painfully nice and polite to the guy who was "just trying to help."

But, I slowly realized these guys are not trying to help at all. By offering to push me into a wave, they're assuming I don't have the ability to surf on my own, and so they simply offer a process that's devoid of any real lesson in surfing.

It took me a bit of time, but I've learned that if guys really want to teach me to surf, they'll paddle out next to me and catch waves alongside me. This tells me they know I can either already surf well, or I will be able to do it myself eventually. They'll teach me to watch for waves and learn to read the sea, instead of just sending me sailing into a wave when it rolls in, while I cluelessly sail along on the board.

Surfing, like lots of other aspects of life for women, has some extra land-mines to watch out for. But also like the rest of life, with some confidence in myself and the support of the great people around me, I've progressed and realized I can do anything.

So no, I do not need anyone to push me into any waves.

It's a bummer society conditions women to doubt themselves and question their guts like I did in surfing. But the great thing about it is, we're not shackled to this sexist, preconceived notion. We are strong, conscious women, and when we encounter wave-pushers in our day-to-day lives, we simply have to trust our guts, say no thanks and paddle away.