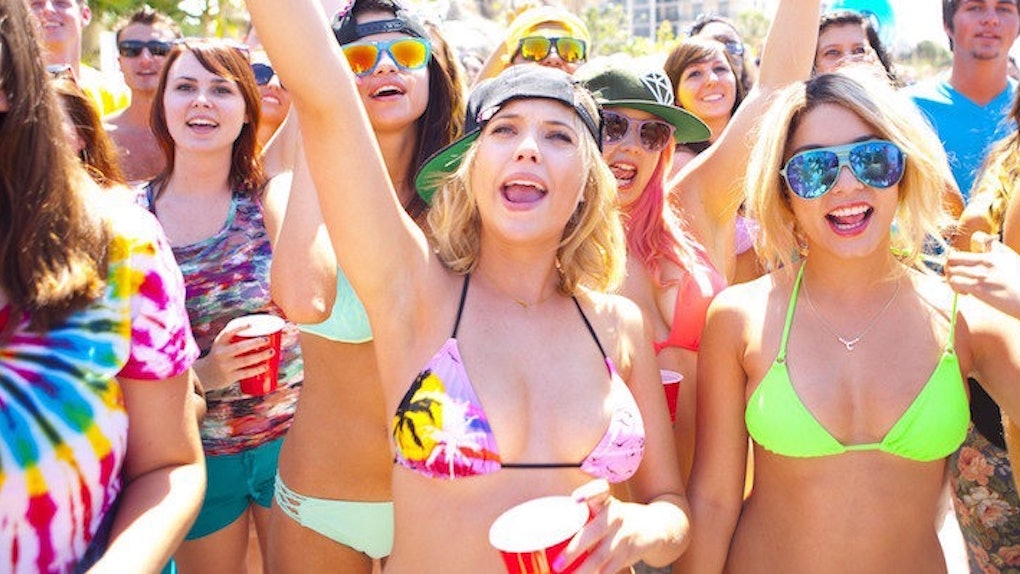 As a queer woman and blogger, I’ve attended many events for lesbians.

But, there is something about the Dinah Shore weekend in Palm Springs, California that just feels a little bit different than the others.

If you’ve been hiding in the closet for the last 20 years, Dinah Shore is the world’s largest lesbian event.

It’s kind of like a music festival that breaks out at a pool party in the desert.

This year, from March 30 to April 3, Palm Springs will turn into lesbian spring break.

Dinah’s already stellar reputation was taken to the next level with solid features in Showtime’s "The L Word" and "The Real L Word."

"The L Word" had a major impact on the development of millions of Millennial lesbians' identities.

We were both queer event veterans at that point, and I felt like I kind of knew what to expect when we reached the gilded gates of Lesbian Dream Land.

I expected Dinah to be a bit like suburban East Coast parties that are filled with former D1 athletes doing pushup contests in between chugging pitchers of Bud Light.

Dinah is not that.

As we drove through the town of Palm Springs, I noticed a 60-foot banner welcoming all the queer women.

It was impossible to miss, and it looked slightly out of place between souvenir shops and little locally owned businesses.

With a few Dinahs under my belt, I now realize that Palm Springs is Dinah.

But on the first trip, I remember wondering how a quiet LGBT retirement community came to host the world’s most debaucherous lesbian event.

After some research, I came to understand a bit about the community and the role that respectability politics played in the formation of Dinah.

Today, around 50 percent of the residents of Palm Springs identify as LGBTQ+.

Many of them are older couples using the community as a retirement nest or a city escape from their busy careers.

But, there was a time when that was far from the truth.

Dinah Shore’s namesake was a Hollywood Golden Age singer and actress who went on to create a women’s golf tournament in what was bougie, rich, white Palm Springs, California.

During the '50s and '60s, Palm Springs was the getaway destination of the stars, and it was known for being prim, proper and very upper crust.

Today, Palm Springs is one of the gayest travel destinations in the world.

The golf tournament was a popular destination for women with few athletic outlets.

I’ve yet to see a golf club at a modern Dinah party myself, but rumor has it the tournament is still a thing.

The California lesbians of the 1950s and 1960s loved the event because it was one of the few places where large groups of lesbians came together.

As a way to extend the feelings of community after the tournament, they started throwing lesbian parties and took on Dinah Shore’s name as a tongue-in-cheek lesbian identifier.

If a woman knew about Dinah Shore and could drop it into casual conversation, she might be gay.

Today, the name Dinah Shore is more closely associated with lesbian culture than it is with golf or the actress.

In fact, the golf tournament dropped the name Dinah Shore a few years back because the name had become synonymous with lesbian spring break.

Apparently that’s a branding issue for a mainstream event.

Today Dinah is one part chilling by the pool to the sound of DJ beats and two parts evening parties and concerts.

Dinah’s founder Mariah Hanson has a knack for booking some of the biggest mainstream acts.

Katy Perry, Lady Gaga, Iggy Azalea, Kesha and Meghan Trainor have all done concerts at Dinah just as they were getting big.

But that hasn’t always been the case.

In 2006, Hanson decided to lift the bar for queer women’s events.

She envisioned Dinah as more than a lesbian pool party in the desert.

She wanted to build something that was both respected in the queer community and the mainstream world.

After years of unreturned calls from mainstream music labels, she changed everything when the Pussycat Dolls agreed to perform at Dinah.

It was a financially brave move for a business woman, who had, by all accounts, a wildly successful annual event with a cult following.

Why did she try to fix something that wasn’t broken?

She believed our community was just as deserving of high-quality production and entertainment as gay men or straight folks.

Unfortunately, marketing for anything aimed at queer women is extremely difficult.

Advertisers and investors still refuse to believe that we’re a profitable demographic.

It’s the old stereotype that queer women don’t spend money, but I just don’t believe it.

Can we sell out a bar every day of the week?

Maybe not, but there are aspects of our community that lead to solid business investments.

Mariah was one of the first promoters to see this, and several others are following in her footsteps including DJ Whitney Day.

Day is an international DJ, and lesbian event producers known for her legendary parties in NYC.

I wanted to throw well-produced parties with diverse female talents in top-notch venues — basically, events that are on par with what everyone else seems to have […] We need great music, solid sound systems, and credible venues—not just to feel 'safe,' but because we deserve to have high standards in our nightlife options.

She has a point.

When we lower the bar to just feeling safe at our own parties, we’re selling ourselves short.

Safety is a necessity, but it should be a given.

My 20s were a blur that ended up looking like one giant, Brooklyn queer scene party.

I came of age at Whitney Day’s parties, attending P-Town Women’s Weekend and celebrating Pride across the globe.

In my world, there have always been incredible queer spaces, but that’s not true for people who weren’t spoiled by the New York City queer community.

Sure, Dinah has a bunch of half-naked women binge drinking everywhere, but that’s not really the appeal for me anymore.

There is just something about the crisp desert heat in Palm Springs (or maybe Bacardi-induced dehydration) that puts women into an entirely new element.

At last year’s Dinah, Bly and I got dressed for the white party before heading over to an invite-only media cocktail reception at Mariah Hanson’s house.

Dinah is a showcase for queer fashion, so I knew people would be throwing down in the style game.

I just wanted to make sure I didn’t look out of place in a sea of trendy LA lesbians.

But, I soon realized there are different pockets of communities at Dinah.

Mariah’s cocktail party ended up being more like a grown and sexy industry party rather than a spring break-ish poolside sh*t show.

For some of the women I’ve met over the years, Dinah represents different things, but the common theme is that Dinah is a place of community.

For some, it was the first time they’d ever been surrounded by queer women.

It’s clear that both Dinah and Palm Springs have a very special meaning for our people.

I talked to a young woman from South Dakota who told me that she’d just come out to her extended family and needed to feel like there were people like her in the world.

Dinah did that for her.

Another woman from the Deep South mentioned that the lesbians in her rural town were all exes, leaving her few options for finding a partner to spend her life with, unless she left her hometown.

For her, Dinah meant the opportunity for love, but also for building the future she wanted.

In an intimate peek behind the history of Dinah Shore, Hanson shared with Huffington Post,

For me, the lesson learned is how important it is when it comes to our dreams, to follow our instinct, even when the stakes are high. I am a firm believer that our internal compass always points North. When we listen to that inner voice, despite the odds, despite the risks, despite the costs, and act when our intuition tells us our direction is right, we can't go wrong.

If you haven’t been, this year, your compass should point you to Dinah Shore in Palm Springs.