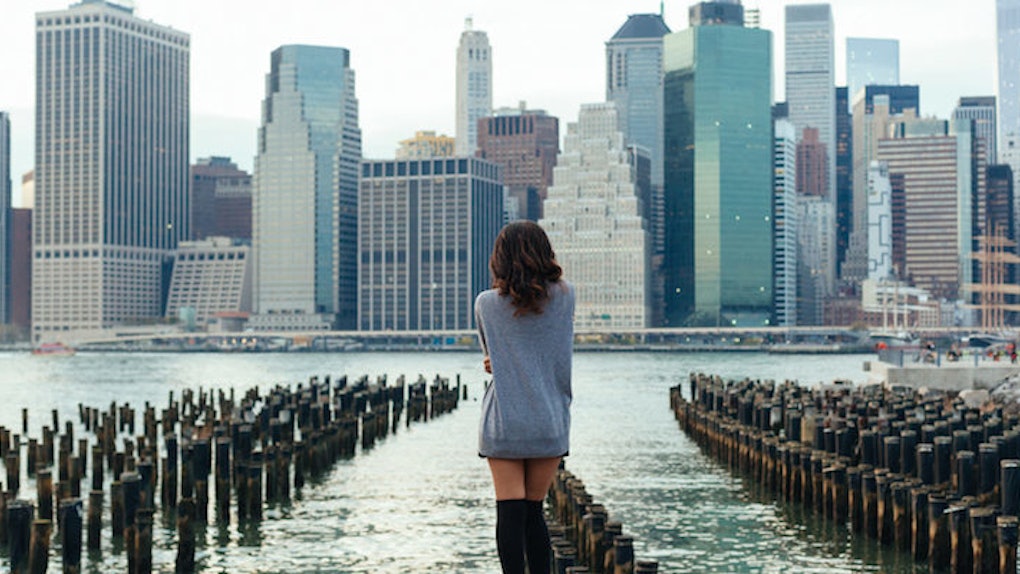 At Its Worst, It's Better Than Everywhere Else: Why We Put Up With NYC

Why do we live in little boxes with loud neighbors and louder streets? Why do we live with rats and cockroaches and dirt (so much dirt)?

Why do we live in a place where the moment you turn around, someone's in your pocket, tripping you, spitting at you and telling you to leave?

Because it's f*cking New York, man.

It's the entire universe, bare naked and exposing itself, coming into itself while simultaneously spitting itself up with us in the middle of it.

The only town that can hold the millions of ambitions and make you believe there's still a chance.

It's getting into a taxicab to hear Pink Floyd at the perfect moment, on the most perfect night that the world seemed to set specifically for you.

It's a bunch of those perfect New York minutes when the right people, the right drinks, the right weed, the right f*cking Uber driver brings you to the epicenter of this thriving throng of the earth's heart.

Because if the earth had a heartbeat, it would pulse out of New York.

We live in tiny apartments… because we have the whole world at our doorstep.

You give it all your money and comfort, and if you're not careful, your sanity.

But you have the world at your doorstep. Outside of your box is the center of everything, the portal to every concert, place and country you've ever wanted to go to.

We put up with eight million sh*tty people… because we'll meet 20 of the most inspiring best friends we'll ever have.

Only in the masses can you meet the individuals.

It's in the midst of crowded parties, overflowing concerts and random bars where you stumble into the people you've always been looking for.

Those people who have passion, thoughts and dreams similar to yours, or if you're lucky, completely different.

We wait in long lines… because the options are endless.

Everything is a wait, but every wait is always worth it. The lines lead toward things you've never seen, the waits are for times you can't spend anywhere else and the prices for things that are absolutely priceless.

We put up with the toughest competition for jobs… because this is the only place we can start our careers.

It's the place for everything you thought you couldn't do. The only place to be starving and rich at the same time.

We put up with the crazies... because every crazy has a fascinating story.

Only in New York do you realize crazy is good and average is boring. It's when you realize you want to be different, unique and totally out of your mind.

Because it's the crazy ones who fit into the city so perfectly… even if they don't fit in anywhere else.

We put up with the crowds… because we're free to be ourselves.

In the masses, we are free to be individuals. In the sea of people, we can just be a person.

In the crowded streets, we are one out of a million. In the jungle of buildings, moving vehicles and walking residents, we're left alone to be ourselves.

We put up with the expensive bar tabs… because the best memories are made in NYC nights.

We put up with the noise… because the excitement is intoxicating.

One night, you can't sleep because of the noise; the next night, you're the one making it. It's a trade off.

You put up with your neighbors' parties so you can have your own. You put up with the ambulances, fire trucks and honking cars because you want to be in the middle of it.

We put up with the attitude… because the people are so real.

You bump into assh*les, tourists and people just in sh*t moods. But you also bump into the greatest people who can make your bad mood that much better.

No one is fake; everyone is him or herself, even on the bad days.

We put up with the subways… because we can go anywhere in the biggest city in the world.

Delayed trains, high fares and sweaty cars are worth it because they're getting you somewhere. They're taking you from one side of the world to the other.

We put up with New York... because it's the only city worth putting up with.

The only place where the sh*t is worth the stink.